Hello glowforge hive mind. I’m having a problem with a file and trying to determine if it’s operator error or an artifact of the GF UI. I’m trying to create a stamp with an image and text. I created the .svg in CorelDRAW and have recreated it several times. I can’t get the text to engrave in negative (though it will score and cut). The last time I created the image in Paint Shop Pro and then converted to a bitmap and then imported into CorelDRAW assuming it was an artifact of text being converted to curves (like an outline that I can’t find?). Now I get some of the text engraving but not all??? Even though it was all created equally!?

Screen shots and the file below. Any help is greatly appreciated. 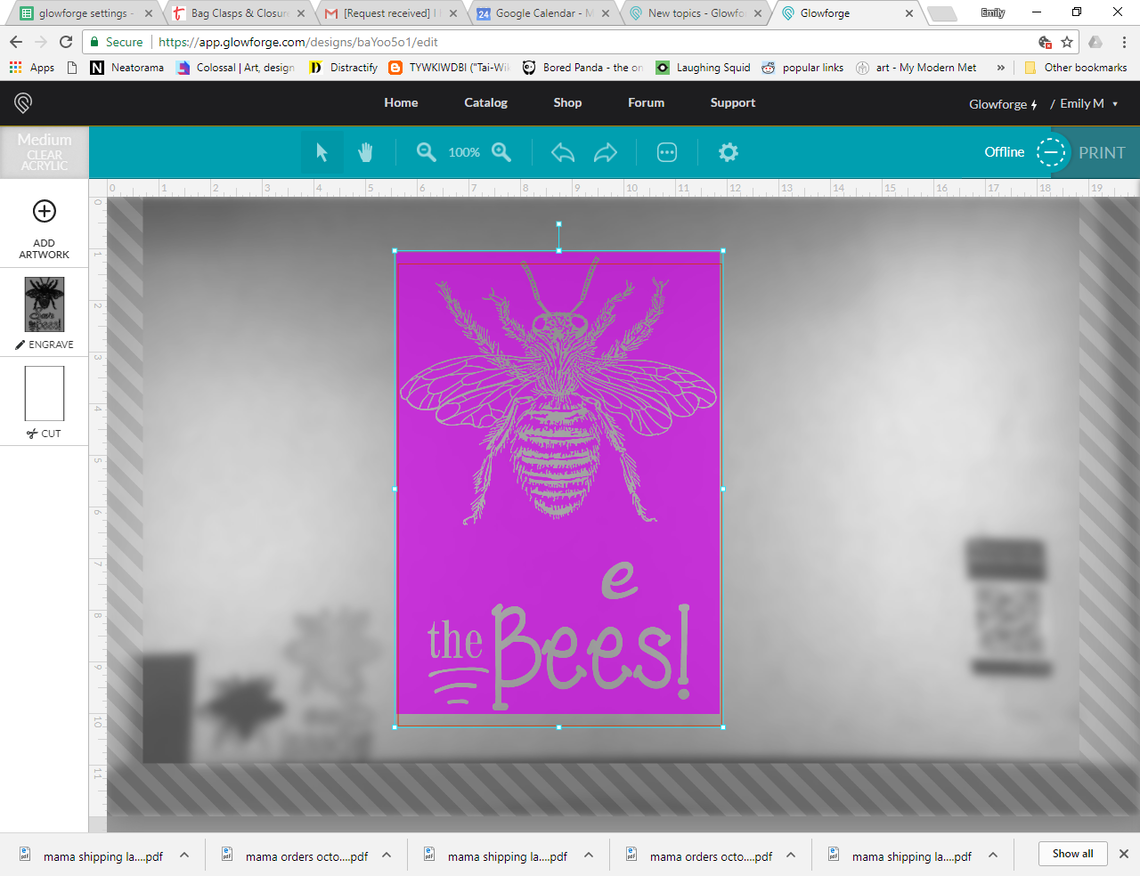 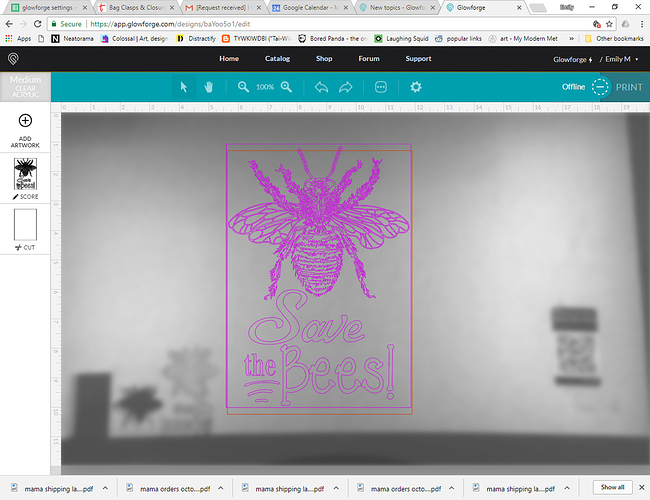 Edit - for some reason my file didn’t attach. Maybe it’s one of those days where I should stay away from electronics. Still working on it.

Ok uploaded the file to google drive and made it public.

Don’t know anything about Corel, but when we see something like that in Illustrator it is usually because there would be a white fill inside of the “Sav” sitting on top of the colored background instead of having had that shape subtracted from the background.

There has been a case of a similar issues with CorelDraw saved SVGs before, with a full thread discussion on it here, (along with work arounds), if I recall correctly:

First, is there a reason your Cut box is not in line with the etch box? Your red box will have the glowforge cutting through the bee’s antennae and leaving you with a bit of un-etched portion?

That’s what I thought it was, but I compressed it into one curve file and basically took front solid file minus the back filled file. It still could be there and I just can’t find it, but why would some of the text print since it’s all created the same way?

I just accidentally moved it before uploading it and decided not to fix since it was immaterial here.

One other thing: if this is going to be a stamp, don’t forget to reverse the text, or your stamp will read backwards when you use it.

I have it reversed on the original files, these are my “work arounds” to see if I can get it to work. Hence the name temp.svg.

Looks like the upshot of the incredibly long discussion we had before was to rasterize the image and convert it to a bitmap for engraving. That should be easy enough to do.

So, I got it to work. Using Inkscape, I clicked the bee and text and I had gotten an ‘undefined’ in stroke color. I selected a color, Black, and now it works.

hmmm…I did that (I think) in CorelDraw and got the same results. I used a hairline stroke (black). Still works for cut, but the Sav is gone for engrave.

That is odd. So when I uploaded for my GForge, I showed all the letters fully defined. Thinking I had it, I was like YEAH! and posted. I didn’t realize it wasn’t set for etch. Select for etch, and the SAV disappears. How strange.

WOOHOO!!! I got it to work! I rasterizezd it in PSP and then saved and imported as a JPG instead of BMP but still did BMP tracing to convert to SVG. Not sure why that worked and saving as BMP didn’t but now I know.
Thanks for your help @karzdan and @Jules.

I’m on my first cup of coffee this AM, so forgive me in advance. With that warning out of the way: most of the time something like this, where you have one big solid engraving and just a cut line, it will be easier to convert the engraved area to a raster before heading to the UI. This way you’ll basically get a WYSIWIG; the UI’s RIP software is going to rasterize it for engraving purposes anyways.

When I opened the file in Illustrator, I had one big compound path that had the background and text all combined. It didn’t appear that the text had been “knocked out” of the background. Since I saw you got it working, I didn’t go through the steps of knocking the text paths out.

Edit: I see where you said you imported it into the design software as a bitmap, then retraced, etc. You can embed raster images into a SVG; SVG’s don’t need to be pure vector graphics. Just make sure you have “embed images” selected in your export/Save As options rather than linked.

This is a big workflow challenge to adapt to. Thanks for posting.

When doing relief engraving with a background engraved and the text and graphic proud of the surface and untreated, it seems we are unable to avoid having a two step process. If you want the graphic and text to be editable, you’ll have to keep them as separate objects and not a compound path. Then you either, do a boolean and punch out the negative space in the background and bring that pure SVG into the GFUI, or you export it as a bitmap and bring that into the GFUI. I wrestled with this workflow when doing the sewer-cover top plate for my exhaust port plug. I like staying with a pure SVG to have more options with positioning, especially for rotating, and resizing. The easiest is saving the design file with separate objects that you can edit as paths for later use, but then export as a bitmap. Keeping it a vector allows minimally more functionality, especially if you have different colors in the SVG for the different depths. You can do that with different shades of gray for your objects engraved and then the bitmap can be used with gray scaling. Can’t do that with gradient fills of closed path objects.

Doing the cover plate file was very frustrating figuring all these things out. Once I realized that I had to keep a master all vector SVG and keep my edits on there but always have to export a different file either pure vector or raster. I’d make the file and upload and found that something was wrong, then I had to go back to an original file and fix it. Often I had made changes already to the saved file that made me have to redo the text from scratch.

Finished a the vent cover as @lowside suggested and @Tony inspired: The Italian reads literally “discharge vent”. I toyed with the idea of translating Glowforge or even putting the whole thing in Latin, but this works. This is cheap plywood so it’s a little splintery, but as a prototype it works great. [image] I kept one layer of the Celotex plug just to give it a little more insulation. It’s dropping into the teens tonight. [image] Makes a much neater fix. Still has that unfinished look…

Is the blurriness of the bed in the photos typical of all machines? It seems pretty excessive.

Her Glowforge is offline.

It gets blurry when offline?

I believe it gets blurry becasue the camera isn’t being told what height to focus at.

You’d think that wouldn’t matter since it’s not a live preview of the bed; it’s whatever last image was stored. Maybe they blur the last image as a visual indicator of hey, your Glowforge is off. Who knows - just speculating. But it seems they blur it intentionally.

The problem with the file was the path direction of the nodes in the SAVE part. (It’s the problem we discovered in the link Jules posted and you can read about the issue at length there.) The GUI does not always handle the Corel SVGs properly and it really should be fixed. Good news is it can be easily fixed when you know what the issue is. I use Corel almost exclusively and don’t really have the SVG issue anymore now that I have my workflow down.

I’ll post the fix so you can see it. It worked when I uploaded it, so hopefully it does that way for everyone else too.

All I did was select the nodes of the problem SAVE, right clicked and “reverse subpath” and then resaved as SVG. (I also couldn’t help but fix the cattywhompass scalloped nodes in the “e” of Save.) Pretty file BTW, show us the final product when you’re done!