Propane bottles rolling around has always been a pet peeve of mine. So I made some little boxes to go inside my truck boxes. 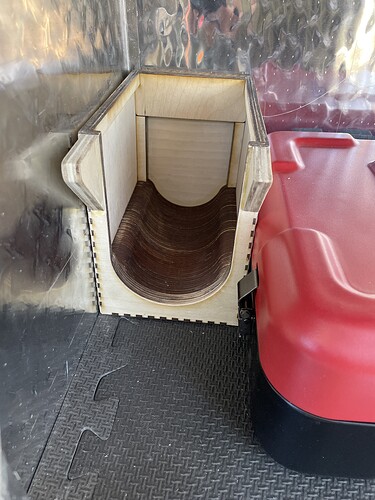 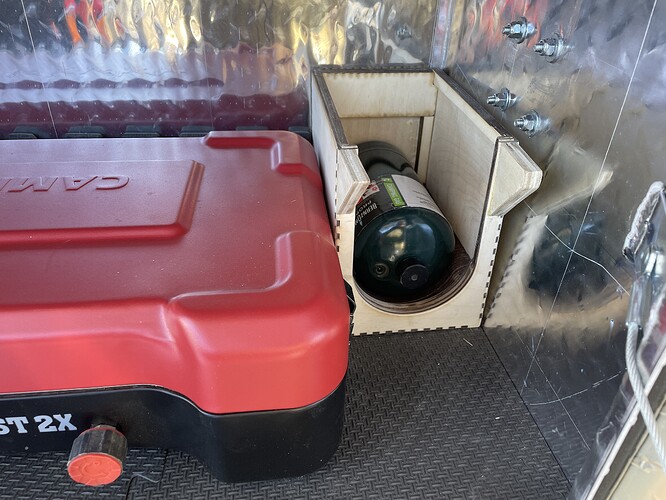 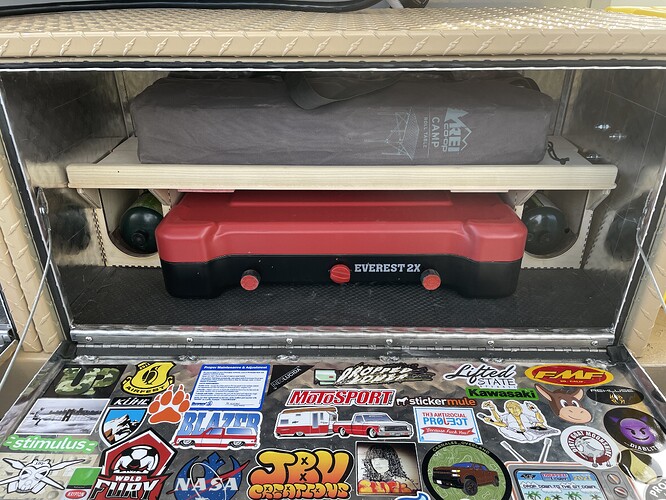 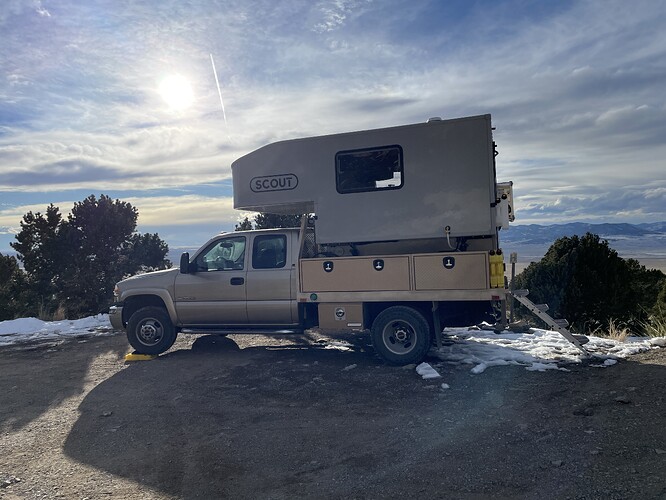 Wow, you are so organized! I like what you did for the propane bottles. I love your NASA sticker, too.

Brilliant! That looks like really thick plywood. Did you cut it in layers?

That’s fantastic! Really makes it nice and organized too.

very practical. my thought was to have them vertical through holes, but this looks great.

Looks nice! Great work. I did something similar for my Santa Fe, with a vertical box to hold the stove (my stove makes too much rattling noise if I carry it flat) and some round holes for the propane bottles and lantern, and a couple of slots for a wrench and tent mini broom.
As for the propane, I have read that you are never supposed to carry them on their sides because the overpressure valve would then be possibly covered with liquid, and may fail to do it’s job. That being said, I’ve never heard of one exploding because of being on it’s side!

@cynd11 so many layers of 1/8" BB ply! I used up every little clamping device that I had for the glue up… should have taken pictures of that, it looked funny. The little triangle supports in front for the shelf were cut from 1/2" Lowes birch plywood using a miter saw.

@pubultrastar i considered vertical holes, but that would mean having to empty the shelf to access the canisters. One of the goals for this camper build is to avoid having to tetris stuff in and out everytime I want access to something, the way I have been doing for years with my jeep camping. So I can grab the stove and a canister to use on a picnic table without having to move the rollup table, and putting away is the same idea: no having to stage everything before loading it, everything has a place ready to go.

@advtrvlr I have heard the same thing about propane tanks laying sideways, but AFAIK that only pertains to the larger containers with shutoff valves like 10lb/20lb “outdoor grill” tanks. And even with those, if the tank is strapped in place with the valve at the top it should be fine… that is how the 10lb tank was attached from the factory in my old Lance camper. In 20+ years of jeep camping with those bottles stuffed in any place they could fit, I’ve never had an issue. But now I’m curious to go look at the warning label and see if it says anything…

I like that organization, allowing access without the Tetris action!
Have you got a snow blower for that expansive driveway of yours man? Here comes the next dump…

I have a shovel

I have a shovel

…and a young(er) body to power it. Rolling in from the storms Calif. has been dealing with - it’s gonna be wet.

This is a fabulous idea! I may need to do this!

Good to hear. I never worried about the small canisters, but I have a 4 Gal tank that I started to make a horizontal mount for, then read all the warnings and changed it back to vertical. My Storage boxes for the back of the SUV have gone through a few design iterations!

So you asked for photos, I don’t have any with the gear in the storage, but heres some of the empty pieces. The tall narrow box holds the propane canister lantern standpipe. It used to lay flat in the bed of the SUV, but was always buried by sleeping bags and chairs. The larger tall box stores the Coleman stove vertical (it rattles less in the vertical position). The flatter box stores the propane hose and bbq lighter in the lower box portion, and the Lantern is in a wooden box sitting on top in the back, and the rounder portion on top is for the propane canister itself.
The smallest box holds a small propane canister and a battery lantern, and there is a spot for a crescent wrench. They all attach together with a simple screw/slot arrangement. The door on the box uses a wooden hinge, and a magnet to hold it open. I was trying to maximize space, but leave everything easy to get to when all the other camping gear is loaded. 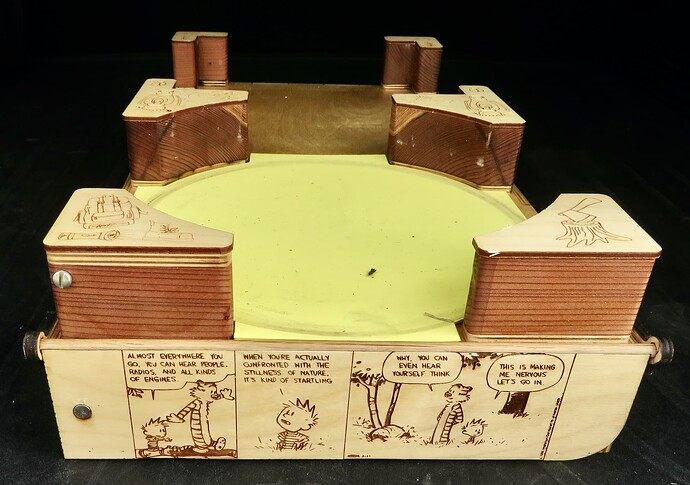 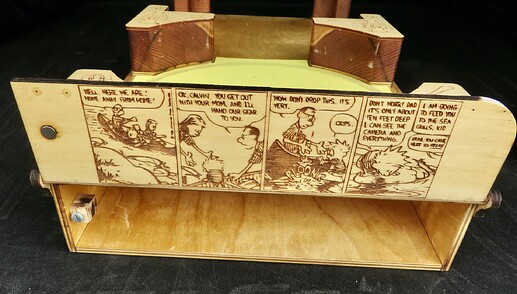 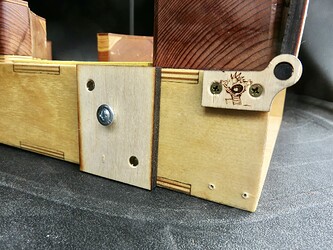 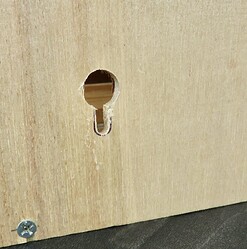 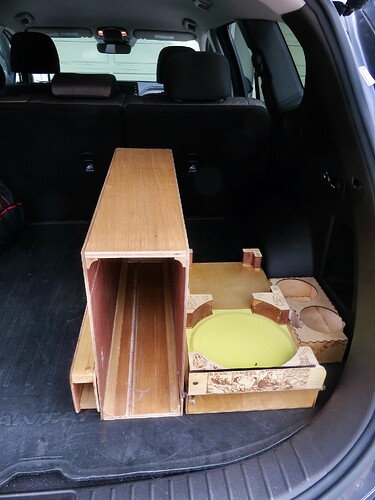 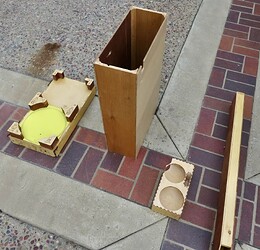 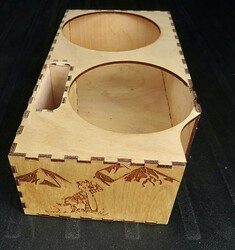 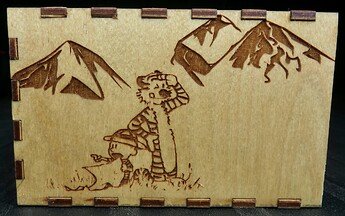 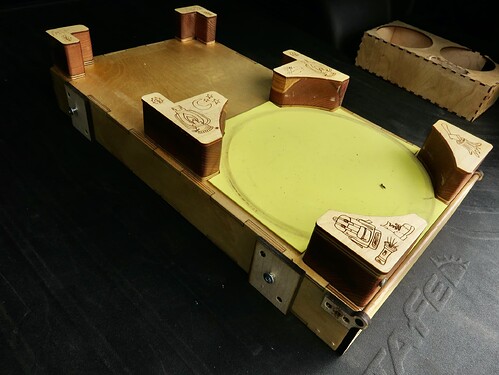 cool, it acts as it’s own storage case too? Love the Calvin and Hobbes engravings!