So, my GF gets here Monday, whoo!!

And I happen to be remodeling a house for my mom that has a ton of mid century 1/4” walnut paneling that has got to go.

I know cutting some of this for GF material should be fine, but here’s my question:

The previous occupants were professional indoor smokers, and there’s going to be a ton of tar/formaldehyde/benzene/etc.

Any chance this will corrode the machine?

Corrode, no. Junk up the interior and smell bad, maybe yes?

If you’ve got access to a planer (thickness planer, ideally I’d think) then that should tidy up the panels nicely for way less effort than actually trying to clean the surfaces by hand.

1/4" solid walnut, or a walnut veneer over an engineered wood product of some sort?

Walnut should, of course, be safe. Any treatments to the walnut, whether during manufacturing or applied afterwards (did previous owners polish it regularly?) are unknowns. If it is not solid walnut, what exactly was the formula used for the engineered product? I would expect any smoke residue to be just that, surface residue that could be cleaned off. It is my understanding tobacco smoke is something people who restore paintings deal with a lot. They would presumably have methods of cleaning that walnut could stand up to if you want it cleaned and don’t want to go with the “that should work method.”

As far as hazardous material released by the glowforge, the thing to consider is how much of it will be vaporized? The depth of material removed is 0.25 inches and the width will be roughly .008 inches. The length of the cut(s) will get you volume. If you’re engraving, add that volume in. Most of that removed material will be particle smoke, but some will be other compounds either freed into the air or products of combustion. So the question is what will the concentration be and what concentration is 1) corrosive or otherwise harmful to the glowforge, 2) harmful to health considering it will be vented into a large volume of air and presumably breathed mainly by squirrels
(unless you vent over a sidewalk) and 3) harmful to health residue buildup inside the machine encountered while cleaning (hint use gloves.)

My main concern would be if it is truly solid wood and what was used to treat it or clean it. Personally, I wouldn’t be as concerned about what happens to tobacco smoke when it is burned again. Concerned about what walnut that hasn’t been cleaned of smoke residue would feel like and smell like, oh yeah, that definitely.

It’s original to the house, 1967. Hasn’t been cleaned, I imagine for twenty years. To give you an idea, the walls that I thought were at least a light almond color, are actually bright white under screwed in shelving that I removed.

And it’s definitely solid wood, albeit stained/finished. I know trisodium phosphate is a professional degreaser/deodorizer.

Here’s a pic of the paneling 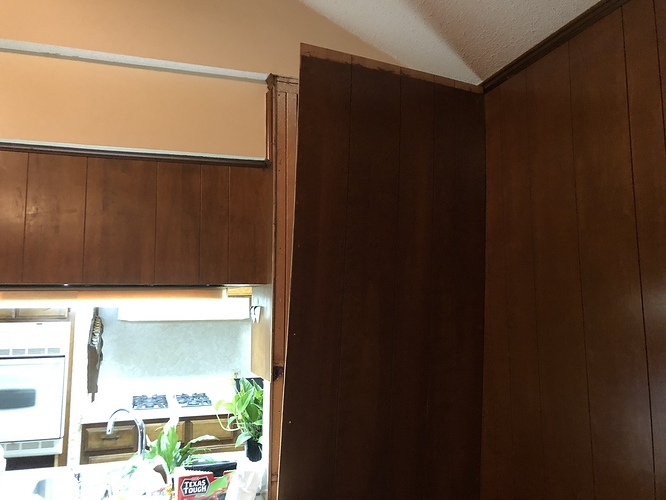 From that era, my guess would be dark stained mahogany ply paneling. I expect it would be fine in the laser. Looks like a big score on material.

You might want to try some 409 cleaner. It will immediately dissolve the tar on the wood. Works easily and is very fast.

Have you started using any of the walnut paneling? Details details…gotta know! Whatever are you going to do with all that?