Vector engraving an image as a Hilbert Curve

If you ever want to engrave a greyscale image using vector engraving (using one really long continuous curve) rather than using a raster engrave, try out Image2Hilbert

Here’s a video of someone actually engraving an example.

It turns an image into a sort of modified Hilbert Curve (a well known space-filling fractal). It even calculates the length of the curve, so you can estimate how long it will take to engrave given a particular speed setting.

Very neat effect. I’m a little bummed that It didn’t work so well as a Dilbert curve… 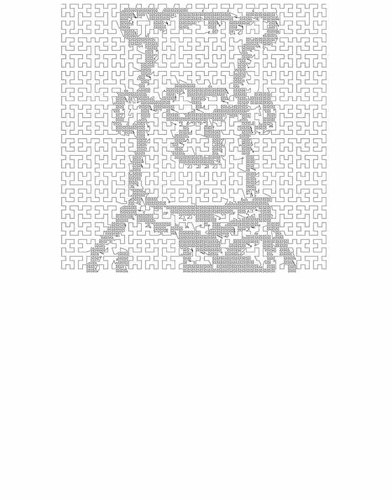 Whoa… gonna have to try that!

With the Pro pass through slot, will a long (multiple foot length) job be able to do a Hilbert Curve and maintain a sharp straight edge?

Obviously feeding the material as straight as possible helps, but will the software be able to auto correct alignment long banner type projects.

Will this feature be part of the initial release or as an add-on later in order to get the product into the owners hands with the pre-October 25th delivery schedule?

what kind of spaghetti would that create on cut instead of engrave? I must try once I have a glowforge.

If you lifted/slumped very carefully, you could have something that would give you a clear image from straight on and completely incomprehensible otherwise.

Yes! We aim to have this ready when the Pro units ship, although if necessary we’ll ship the units first and update them shortly after with the software.