For those using an iPad or Mac, a data point to post on what’s available for converting a raster (bitmapped) image to vectors…

Vectornator was mentioned in previous threads. It became a free app (on iOS and macOS) back in 2018. It’s still free from the respective app stores and continues to undergo frequent updates. Their feature is called AutoTrace, but it’s not initially evident nor intuitive. Their online help makes no mention how to invoke it. The raster image must first be selected, only then will the right panel dialog generate an AutoTrace option. The two adjustable parameters are 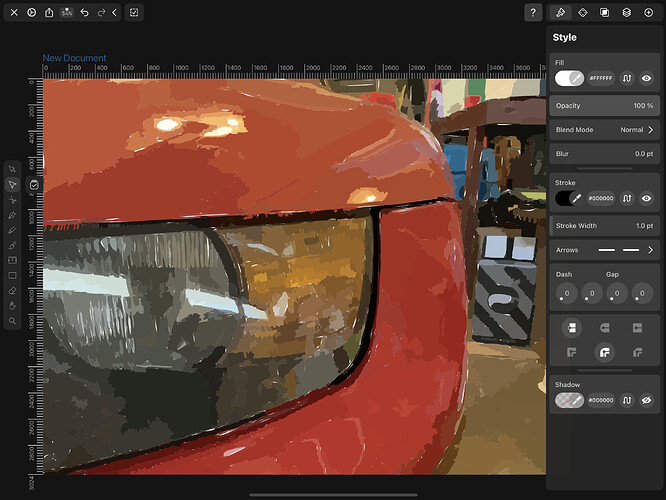 From kicking Inkscape’s tires eons ago, this was roughly the similar result. Minor slivers of white indicating areas where vector patches aren’t butting up congruently. Nudging Min path size to anything other than 0% resulted in garbage.

Beyond that, it’s a capable vector drawing program. I drove it for a few days and got irked at some of the convolutions required for certain tasks.

Vector Q is a renamed one-trick app previously known as Imaengine offered primarily for vector tracing. In this rebirth, the UI has been GREATLY improved and is imbued with additional features — bringing it tantalizingly close to qualifying as a bonafide vector-editing app in its own right. It’s marquee feature shouldn’t be overlooked though; it converts vectors at at a dramatic pace. As a flex on its speed, it offers additional real-time vector style options to chose from. 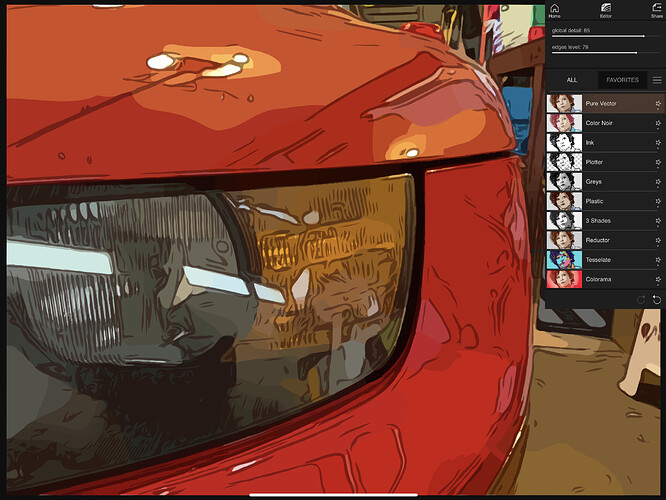 image2732×2048 756 KB
The algorithm it uses to create vectors make smoother shapes that might prove to be far more useful for Glowforge cutting. The adjacent vector shapes also seem to butt together cleanly.

Another demonstration of its speed can be seen by feeding it a VIDEO clip. It rips through the frames faster than what any mobile device should be capable of. 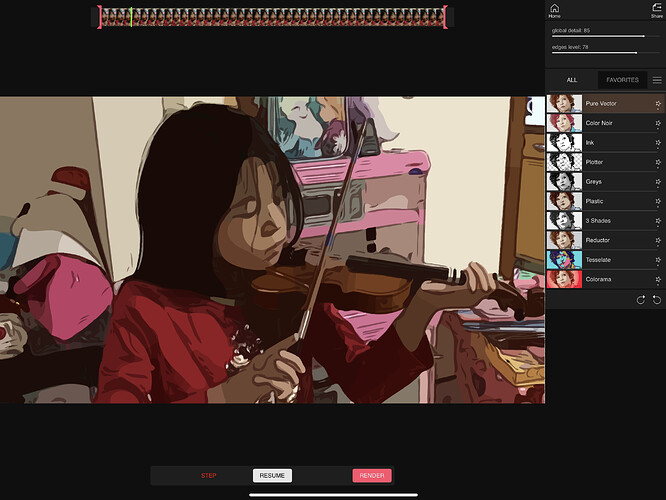 image2732×2048 535 KB
This is a one-click workflow that might otherwise be much longer on another platform.

The mobile app has a $3.99 pricetag (full unlock). This is also available in the macOS app store. At the time of posting this, it looks like they brought back Imaengine ($2.99) reworked with a cleaner/simpler interface aimed at iPhone users.

Who will be first to laser cut an animation on their Glowforge?

Zoetrope Made on a Glowforge

A friend has an bimonthly “art salon” and this month’s theme was “Illusion”, so I thought a zoetrope would make a fun project. When I tried it for the first time, I thought it didn’t work, everything was super blurred. Then I brought it into the living room to show my “failure” to my wife and son and it worked beautifully! The difference? LED vs natural light. LED lights are actually strobing at high speed, too fast to notice, but enough to interrupt the stroboscopic effect of the zoetrope. T…

Building a modular zoetrope Made on a Glowforge

And, there it is! My animation choice (an outlined treatment of a Conway’s Life glider looping across the frame) turned out to be not great in terms of visibility, even after I took a colored pencil to it to create some more fill contrast, and the lighting in my living room this evening is dim enough to make for poor videography in general, but the concept is definitely there! I’ll look into playing with some additional animation ideas in the next few days, to see what might work better for t…

I find that “cartoons” engrave more easily than photos but as rasters give more depth I could see vectoring it, and then rastering it back to get the look without the loss of shading

Interesting! I’ve had Imaengine for years but haven’t looked at it for a long time; I’ve just been using desktop Illustrator instead. I was unaware of Vector Q and will certainly check it out, thanks!

Last night I finally spent some time with Illustrator on the iPad. It’s powerful and well-featured, although the learning curve feels steep (at least for switching over from the desktop version), and I really only scratched the surface over the course of an hour or two. For now I think I can use it effectively to start the basics of a design, before transitioning over to the desktop for fine tuning.