As I traveled the back of the black dragon in my chariot, dreading my day in the wage pits. I had a thought, or three. Perhaps I should have been paying better attention to the pilgrims around me, also on their way to their respective salary mines. But as far as I know, everyone made it to their respective destinations without Interference from myself. But I digress, onto the thought, I’ve amused myself and those around me with 2D items. And now, I find myself wishing to make something 3D and in that vein I recalled @karzdan’s translation of papercraft masks into leather. So we chased that thought beast, through the mire of imagination and began wondering how one would translate into wood for you see, I am not a gentle soul, paper finds itself smudged, smashed, crumpled and maybe a little crispy around the edges whenever I am near it too long. And I’d rather preserve my leather for wearable objects.

So I figured anything stiffer than veneer would require pins or special clips similar to the Dymaxion Globe @CharlesDarwin made. I understand how they work, but my design-fu is too weak to consider tackling such a thing without some heavy hand holding. Though I could cut out the individual pieces, and sand them to the requisite angle before gluing them together, that would rather defeat the purpose as I could just do the same with a bandsaw.

I also guess I could spend a whole lot of time gradually burning down to the angles but again, we’re onto I could do that quicker on a different tool… and I’m not certain a living hinge has enough flexibility to make the folds to eyespec without scaling the whole thing up to ludicrous proportions.

My current thought process is thus. A score for the fold lines, and clever application of steam while folding. Though perchance acrylic could be made to do the same with application of a heatgun to specific areas. So I turn to the collective, for guidance, and perchance answers. Is this a pointless quest? Has anyone else had luck with such a venture? Do wealthy people still think farts are funny?

Try one of the laminated hybrid veneers from cardsofwood.com as they are already quite flexible and have reinforced cores?

I haven’t figured out what to do with the stuff I bought from them so I’ve no direct experience using it, but might be worth a go?

@livingdedboy your musings are hilarious. My girlfriend calls my rambling phrases “Pratt-eling.” As in Rick Pratt.

In any case @martin.anderson mentions cardsofwood.com, and I have quite a lot of it. I may have over-bought. I used it for bookmarks which works quite well, because people aren’t necessarily dainty with those. They hold up to quite a lot of bending - however… the plastic does melt, and kind of burn. Some of the bookmark designs I tried, burned the back layer of wood which is super thin.

Interesting thought thread you have there. One of the things I encountered, while I searched for ideas on my mask, was a process (And subsequent program) called Pepakura. Created for the cosplay community, it is used to convert 3d objects into 2d patterns. What most people do is cut the patterns out of paper, and tape them together. After that they then cut out foam (Or other suitable material) and then glue those to the paper model. Filling in edges, blanks, etc with various materials. They then coat them (also various materials used, depending on hardness wanted) to harden these piece. Then finish them up with sanding and painting. I could see doing something similar using wood veneer and wood putty.

You can see some stuff people made here: https://www.facebook.com/groups/PepakuraLibrary/

Whelp looks like I’m gonna have to order some veneer.

That cardsofwood site has veneer specifically for lasering, is that what you used @rpratt? Or was it a different product that you had issues with?

That cardsofwood site has veneer specifically for lasering, is that what you used @rpratt?

I used Remnant Walnut and Cherry, 0.025" 2-Ply. They have bookmark blanks, but I thought they were too big, and therefore too much waste. The veneer looks like what I bought. Not sure if it has the plastic in it. 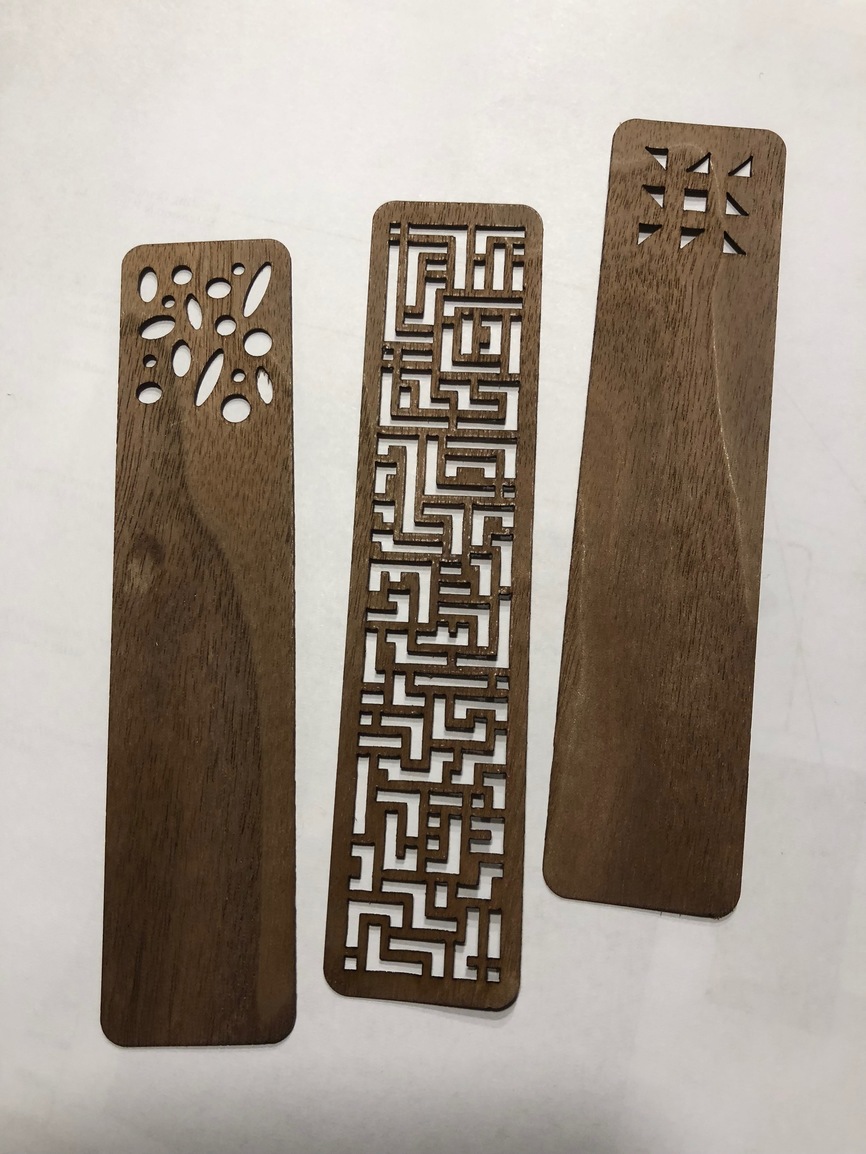 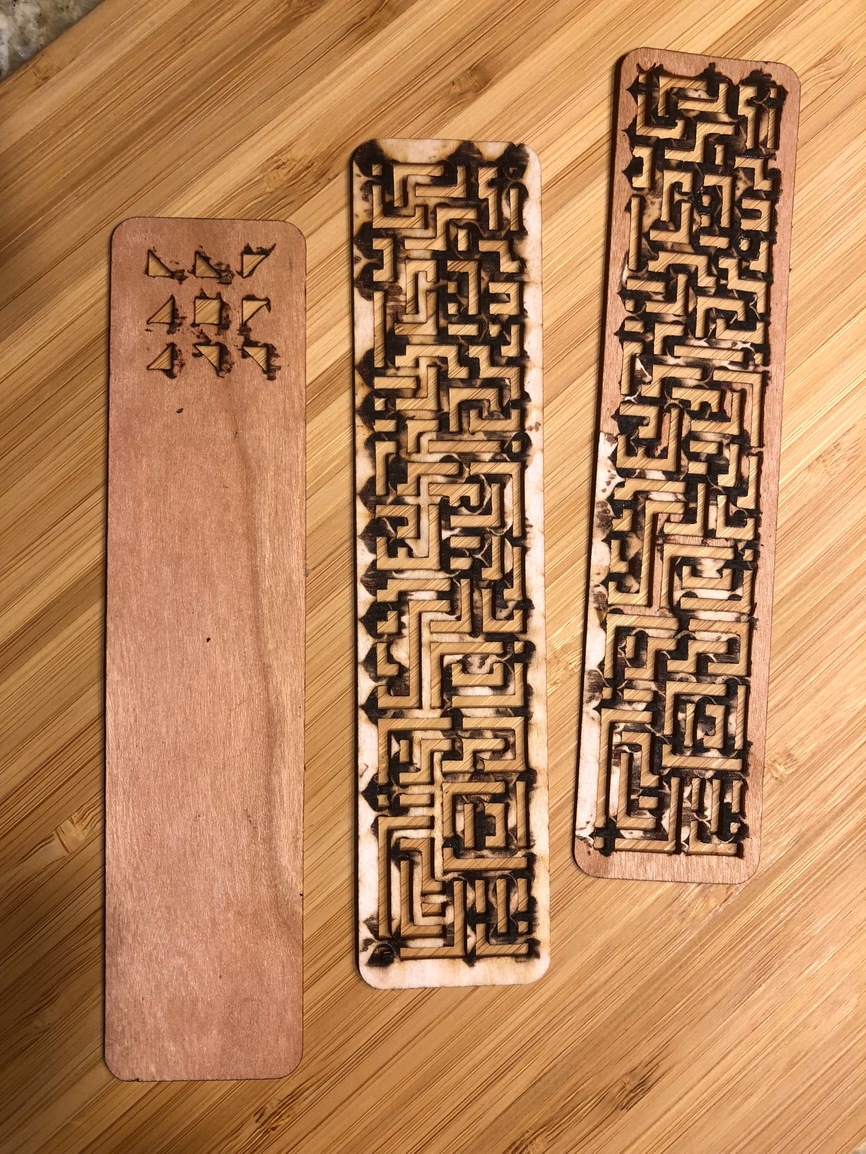 Hi, I would like to know how you did the Chinese inspired middle one?

Hi, I would like to know how you did the Chinese inspired middle one? Could you release the files?

I once asked for files, and got messaged outside the thread to delete the request, because it’s not allowed. “It puts artists in a bad spot.” I plan to sell that one once I get the settings figured out and enough other things to call it a catalog. I will tell you how I did it though. I started in Illustrator. Turned on the grid, set snap to grid, and just noodled with the pen tool.

and I have quite a lot of it. I may have over-bought.

Hah! I’m right there with you - I bought a ton of their remnant packs a little while ago. I don’t even know what I bought, honestly.

Is the 2ply stuff not just the 1ply sheets glued back to back? The 1ply sheets have, like, a fibrous paper backing. Is the plastic you’re talking about the glue to stick the sides together, or is there another product coated in plastic?

Unrelated for anyone considering purchasing, the 1ply warps if you even just look at it wrong. Not a deal breaker, depending on what you do with it. Just something to be aware of.

I’m sure it’s plastic. I tried taking a picture, but just too thin, and the pours on my hand were too big. It’s very bendy and the wood doesn’t break. Also, a good chunk of them came warped. I’m thinking the seklema mat that I haven’t bought yet will fix that problem.

Sorry for the ask, the how to do is what I expected to need.

I was wondering what black magic made it so resilient. I have some other slightly thicker wood veneer that splits and breaks like crazy. Its like night and day with the cards of wood stuff.

I’m thinking the seklema mat that I haven’t bought yet will fix that problem.

I’ve been using a cheap DIY sticky mat and it’s working pretty well. It’s definitely enough to hold them flat and keep the pieces from blowing around. I think it seems to help with the scorching on the back side, too. Maybe because the smoke can’t really collect underneath it? Or maybe just because the mat takes some of the brunt of the laser… force? But I havent done a ton of tests yet - mostly just little squares while I figure out settings - so that might be totally wrong when iy comes to really detailed designs.

I think it seems to help with the scorching on the back side, too.

Hmm, interesting idea. I REALLY want to make bookmarks, but that last batch kind of threw off my mojo. The image below is another tactic. It’s 0.045" Padauk. I bought it in a gift shop for $8. I thought it was obviously made with a laser but no discernable engraving lines. Seemingly simple to make if my table saw was completely assembled and not in the 15 degree garage. 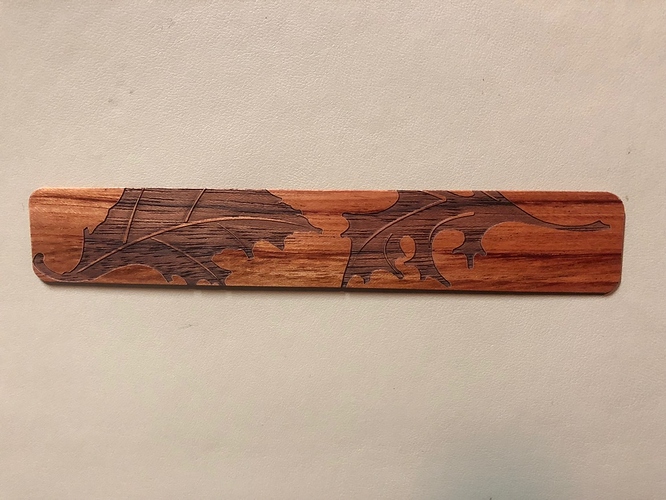 Thats really beautiful. I really like the color contrast.

If the scorching on the back is the only issue, what if you mirrored your design, cut it out, and then sandwiched the pieces together? It would be twice as thick, which might be a problem, but you’d hide all the burning.

Ooooh fancy. Might know a couple bibliophiles, though honestly bookmarks are like pens, theres never one around when you’re looking for it, so you end up using the nearest analog. I might admit I do find the whole “Library at your fingertips” aspect of digital books rather convenient while also leaving more space for, you know, stuff.

Whelp. Guess we’re goin to throw money at the problem and see what happens. I think the plastic core might help in my idea… not sure. FOR SCIENCE!!!

I haven’t figured out what to do with the stuff I bought from them so I’ve no direct experience using it, but might be worth a go?

@martin.anderson- JOIN ME IN MY QUEST! FOR SCIENCE! Or you know. Don’t. I’m going to give it a go either way.

@livingdedboy your musings are hilarious. My girlfriend calls my rambling phrases “Pratt-eling.” As in Rick Pratt.

@rpratt I just call it a ramble. For a good ramble sometimes circles back on it self, with no set destination but eventually you end up where you need to be. Or just lost and getting the authorities involved.

Alright, ordered Veneer from the cards of wood site. And found some papercraft thingies I would like to make. And now, because I can’t leave things alone, I’m gonna pick up some paper on the way home and print them out… So I can draw on them, and then disassemble them so I can figure out where my drawings fall within the folds and set them up to be engraved into the veneer. At least it’ll keep me busy until the veneer arrives.

In an effort to keep everything in one space I will now bring back the dead. MUHAHAHAHA!

Inkscape doesn’t like PDFs… at least the one I have for this plan. It tends to slow down horribly every time I import it to try and set up score lines and whatnot. We will need to revisit it from another angle. Might have to bring it into another program and trace everything out before putting that into inkscape, be we are still working on it.

The veneer showed up yesterday, and it is super flexible. So that gives me hope for the idea. I ordered the 2sided ash veneer short 11x17, sheets, I think. I’ll keep updating as I make progress, but the idea has not yet reached the point where fire might get involved.