Venting exhaust into bucket of water?

I recently had to move my Glowforge to a new room. The window in this new room is much closer to businesses/the street, and I’m a little concerned about getting complaints about the exhaust.

I’ve been thinking about ways to minimize it, and thought of this.

I’m thinking about hanging the exhaust tube out the window and then pointing it down, and putting a bucket of water below it. My hope is the exhaust will spray out the tube, and most of it will get stuck in the water instead of diffusing through the air.

Wanted to know if there was anything I was overlooking/any ways to improve on this/any alternatives I should consider instead.

I’m not sure that anything would get ‘absorbed’ in a bucket of water…
I suppose some lose debris may, but you need a filter to capture any odors or smoke.

As much surface area as you would get, you would not see much beyond flying debris, and not most of that as most would be light enough to just go with the air. If you could force the air down to come up as very fine bubbles you would increase the surface interaction several thousand fold, but even then you would only get the part that was water soluble which would not be much unless you added soap, and then at 200cfm inundate the neighbors in foam.

it’s not a bad idea in theory, if you submerge the hose into the water, it might act as an impinger. if exposed to enough water surface the majority of suspended particles will be trapped in the water.
you do have to contend with providing more positive pressure in the water as well as replacing the water periodically.

I suggest you run the test, optimize the process then document it for us to copy!!

Water filtration normally works by induction (ie pulled through, like you would with a hookah). It will cool and humidify the smoke, but it’s really not going to help you much on odot.

Pushing it to the water is only going to create back pressure, maybe agitate the water at the surface, but not do what you think will happen.

If someone complains, you can look for other solutions, but I don’t think you should have much issue with the smell.

Until he lasers leather

The entire block will complain

I laser leather and don’t have these issues.

I built my own filter system. It’s a bit bulky but it’s not crazy huge. Right now, it’s grabbing a lot of the greasy and particulate coming from cutting wood but not the VOC’s. I’m about to install a big ol carbon trap to try and help with that. I’ll be reporting back once I’ve got something more solid.

Well, I got some biochar from a UK supplier as it’s a lot cheaper than air filtration or water filtration carbon but is basically the same stuff. I’m blowing my exhaust through a bed which is about 30 cm square and about 40 cm deep.

My prefilters really didn’t last long. The first G3 filter was grim and really haven’t run that much. Before I replaced the filters in the last week or so, I could still see some smoke coming out of the carbon trap! It has a heavy, volatile smell to it too, so it’s not trapping enough yet. I’ve also notice that I’ve got a crack on one side of the trap though and that definitely isn’t helping. As soon as I get time I’ll revisit the design of the trap as it’s just not sturdy enough at present.

Overall, I’ll be amazed and impressed of Glowforge can make something effective in the volume they’ve got to work with. The fan alone on mine is massive!

The op put me in mind of ‘cooling towers’ and water curtains, where essentially creating a fine mist creates so much more interface for the GF output to interact with.
Then the mention of carbon filters as more effective for the odors suggested combing the two - like a carbon dust ‘waterfall’ .
So, I think I’ve just re-invented the fluidised bed.

You would need a separate small air pump to keep the carbon dust from settling, then hopefully(!) the exhaust from the GF wouldn’t hit a solid object, like the water surface in a bucket.
Well, it might work.

2nd thoughts - Make a slurry of activated carbon and water, and spray that through the exhaust - ‘carbon curtain’ ?
They use activated carbon to de-colourise liquids, so the carbon will still work when its wet.

Could you make a carbon / water slurry and then bubble the exhaust through it?
I think the big issue is volume - with such a high CFM the volume you’d need to make something like this work is massive. I’d say my filter system, fan and carbon trap probably occupy close to 1/2 m^3 !! How GF are going to make a trap which is effective in like 1/4 of that space is beyond me. I’ll be well impressed if they pull it off.

I agree, which is one of the reasons I cancelled my filter !
However, am I right in thinking the gf exhaust is about 200 cu.ft/min ?
Just trying to give my subconscious something to chew over !

OK so Honda(probably amongst others) have beaten me to it ! 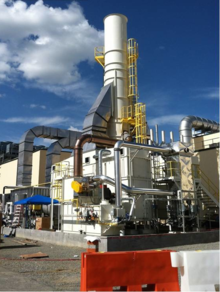 A fluidized bed concentrator (FBC) is an industrial process for the treatment of exhaust air. The system uses a bed of activated carbon beads to adsorb volatile organic compounds (VOCs) from the exhaust gas. Evolving from the previous fixed-bed and carbon rotor concentrators, the FBC system forces the VOC-laden air through several perforated steel trays, increasing the velocity of the air and allowing the sub-millimeter carbon beads to fluidize, or behave as if suspended in a liquid. This increas...

also if you get a burn it is activated charcoal