Just received by unit in perfect condition (all four handles, even). I cut the founders’ ruler with my vent hose snaked up my chimney past the flue. During cutting, I had a clean, not unpleasant or overpowering, but very distinct odor of wood smoke. No fire alarms, but I want thoughts on how worried I should be. In a house full of painted shut windows, the chimney method is my first go to.

I would wonder if you’ve got any sort of seal around the hose within the chimney. You might be venting it past the flue, but it could still flow back down into the house.

Heat from a fire normally forces the smoke up and out the chimney. Just piping air into the chimney may be better than pushing it into your living room directly, but there’s nothing preventing the air from coming down down the flue and into your home. I wouldn’t recommend this venting method unless you can seal the flue around the vent hose.

I want thoughts on how worried I should be.

This is non-authoritative and there will be folks telling you that you shouldn’t use it in your chimney for a variety of building code and the possibility of possible issues but there is at least one other person here who has done precisely what you’ve done with venting through the chimney.

The one thing I’d do is seal it off - either through the damper (or damper replacement) if it’s going to be relatively permanent or using a flue blocking piece of wood or better yet the pink (or blue) rigid foam insulation board so you can get a decent seal around the blocking. Then put a “through the wall” adapter into that and seal it up. Seal the flexi to the adapter and you should be able to eliminate most if not all of the odor.

When the venting is correctly set up, there should be no smell from the unit while it is operating. Just a whiff when you open the lid.

Unfortunately if you’re smelling it while you have it vented that way, it’s probably not a good setup.

There are a couple of folks who have vented out the chimney, but they might have had to do some special things to make it safe to operate that way. I’d suggest doing a search in this category for chimney and venting and see if you can find the threads where they discuss how they did it.

Put some leather or acrylic or my favorite, natural rubber, in the Glowforge and engrave it. Doesn’t need to be anything but a 1x1" square filled with color to engrave, no stroke. That will give you a good indication of whether or not you should continue this experiment or add something else to the exhaust setup.

When I don’t have a fire in the woodstove and depending on temperature differentials air will often come down my chimney filling the room with a slight creosote smell.

The vent air from the Glowforge is pretty much room temperature to my touch. The smoke won’t rise unless the air currents are already going that way. You might get away with it in the winter since the room is far warmer than the chimney. (Depending on where you live) But during the summer or warm days, watch out. 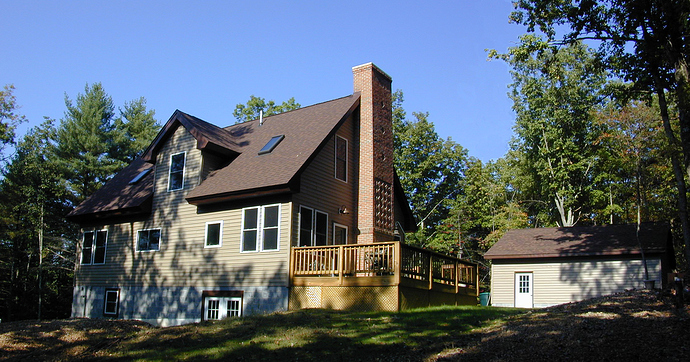 What they said. Chimneys are designed to need a fair amount of heat to draw properly. The GF is likely not providing that much heated air. Also, the damper opening may constrict your hose.

FWIW - I’m venting out my chimney because it is the best option that won’t disturb my neighbors with smoke or noise. I cut a piece of wood that covers the entire front of my fireplace and put weather stripping around it to help make a better seal. Then inserted a 4" modifiable elbow that helps me to aim the air up the chimney.

I vent mine through the old furnace flue, not used anymore because we upgraded to a high efficiency unit - but I have a booster fan giving a positive displacement.
Because it vents out the roof, I never smell anything.

I would have a fan blowing up the chimney. otherwise you won’t get the “draft” you need to carry the smell up and out.

I have seen gadgets for the top of vents for both boats and chimneys that use the wind to rotate an opening facing downwind creating negative pressure that is very much based on how much wind there is but would solve for the lack of heat in the chimney. I would make one out of sheet copper, but there are other possibilities.

I also successfully vent out the chimney. I just taped a thin rod on the end of the hose so the hose doesn’t fold over on itself and used the rod to push the hose up through the flue. We almost always have a light breeze in my area and this method works well for me. The only time I had issues was on very hot days with no breeze. I will likley be moving the GF to a new location, but if it would be permanently vented through the chimney I’d get a fan to pull the air up and out.

I’m having to put my glowforge in my shop and I was wondering if I could vent it through a heater vent? And if not then I’m going to have to run 20’ of vent pipe to get to a window and thing of putting a 6" duct fan close to the glowforge before it goes out the window. Will that work?

Depending on the heater vent run(length, bends, diameter) it could. Just as with any run dedicated for the gf, air pressure along the run is crucial. Also may want to think of some kind of directional apparatus or control to make sure the gf exhaust goes the correct direction in the heater vent depending on the venting setup of course.
Some, like my water heater, are a passive open vent over a short distance or my central heat which is closed venting.

I think we decided to run it in through our hanging shop heater and add a fan.