We had our goats for dinner

When I told my friends we were having our goats for dinner they were absolutely horrified until I explained they were guests not entrees. Then they were perplexed. The short version was originally we had scheduled my wife’s hospital party for sunday and her staff had insisted that we bring the goats. So I schlepped the portable pen and went to Petco and bought one of the those lawn anchors (the one for a 200lb+ dog which gets pounded in like 18" deep with barbs on it) So in prep for the party I had put that anchor into the ground (one of the goats (Oreo) loves to escape) along with assembling the pen.

The party then got cancelled due to the Delta variant hitting the staff, so now I had this thing in our backyard, and figured well heck I am going to bring the goats. So I decided that they would join us for friday night family dinner out on our deck. So I went with my daughter to get them from the barn (they are total morons and with 2 of us we managed to cram them in the back of my wife’s suv (so much poop… the only solution was to have her car melted down for scrap even with a bed-liner). Anyway the first thing that happened was my wife yelling "why the heck did you bring the boys? (the full sized adult males) why would you not bring just the girls? (who are 1/4 the size of the boys since they are only 1 year old). But I don’t like to separate the herd, and they’re all family. So we had the 4 of them playing around while we had dinner. Our next door neighbor has an 18 month old and he loved giving the goats the strawberry tops (the goats only like the tops - they don’t like sweet stuff). And later we discovered they love fire roasted corn (caramel the light colored small one shoved her face in up to her eyes in a bowl of it and ate her way out then the others piled onto the bowl and ate several pounds of corn in seconds. They also like taco shells. Anyway they seemed to have a good time, and eventually we had to pile them back in the car and drive them back to the barn (where of course they ran in random directions in the dark (because they’re jerks), but we eventually got them corralled back in their pen and they settled down for the night: 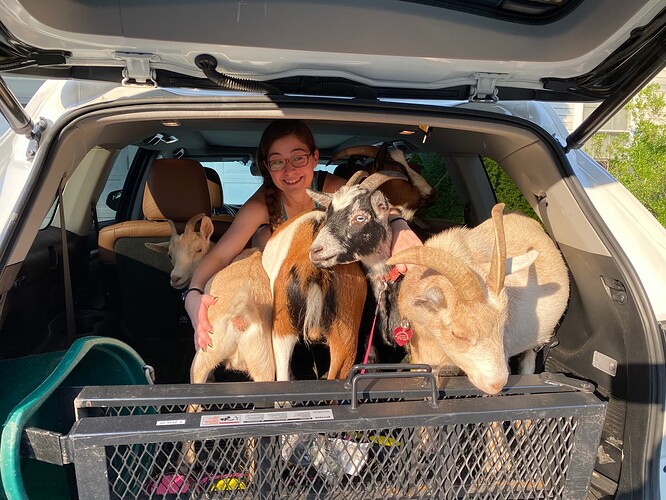 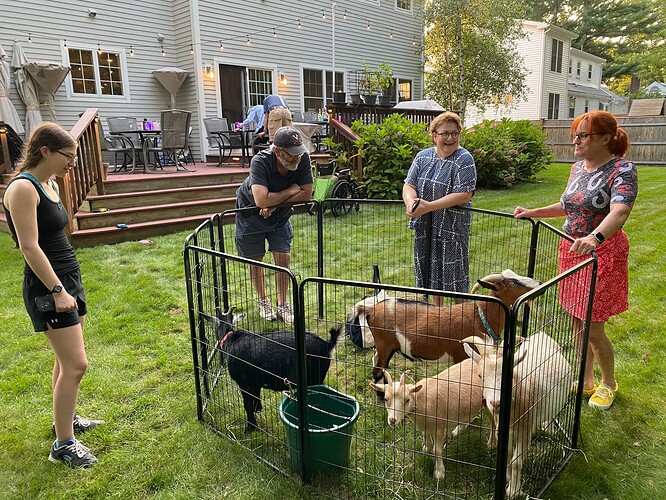 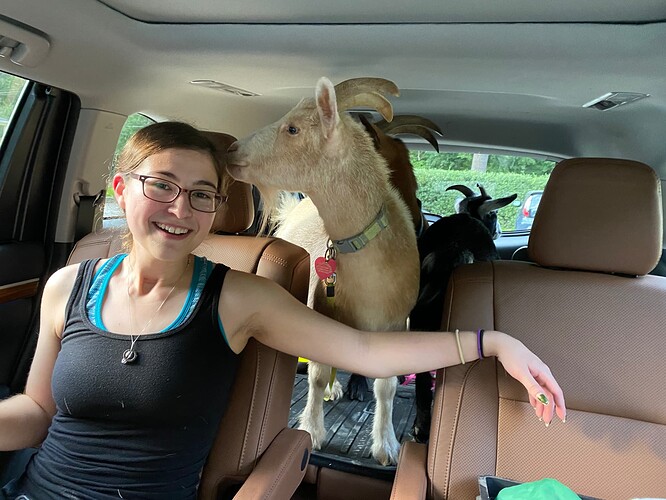 I think any party that has goats has to be a good time.

This was SO funny. And endearing. I particularly love how you lovingly describe them in such negative terms…jerks, morons, etc.

I particularly love how you lovingly describe them in such negative terms…jerks, morons, etc.

They are morons, but they make up for it with enthusiasm…

Now they are going to want to come to every family Friday night dinner.

I hope you got your wife a good replacement vehicle. Not sure how well I’d handle cleaning up goat poop, I love my pets, but I wish they could be trained to use the toilet…though that’d probably be an even bigger mess, I swear the people in my house aren’t toilet trained either.

They are morons, but they make up for it with enthusiasm …

Not sure how well I’d handle cleaning up goat poop

Caramel (the small cream colored one) is so clueless (even against other goats). My daughter describes her as the screen saver which just keeps slowly bouncing around the screen (except it’s her one brain cell). But she’s very sweet in general as opposed to Oreo who is evil and has required a level of engineering normally reserved for Supermax prisons. I mean when you have a stone wall with metal fencing on top and you put an electric fence on top of that and she still escapes. Sometimes while you’re standing right there, and she looks at you to let you know she just doesn’t care… Butterscotch is the large cream colored one and he’s the jerk middle-child and rocky (the tricolor one) is now very chill and pretty much wants to nap in the sun. Butterscotch beats the crap out of oreo and caramel but caramel runs to rocky for protection and rocky is alway happy to bash heads with butterscotch (he still outweighs him by a bit). Poor caramel is outweighed by 50lbs… Oreo is tough and weighs a bunch more (probably close to 50lbs at this point) and will fight back though, she generally just outruns butterscotch but if she can’t she’ll try and gore him from underneath since she doesn’t weigh enough to go head to head. Seems weird that male goats bash the females in the herd since presumably they kinda want the females to like them? (even though the “boys” are neutered)

Wonderful, thanks for sharing this cuteness overload! I was scared to click but I knew it would be a good story 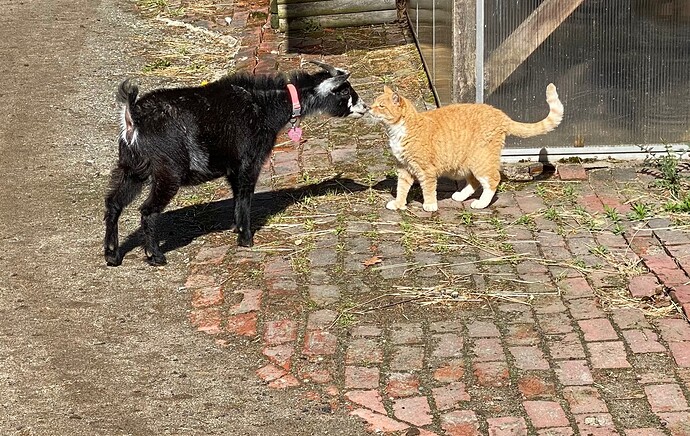 YHahaha, best laugh of the day…

BTW: to tie this back to Glowforge note the snazzy glowforged anodized tags…

Note Woody is ancient and while an absolute fixture at the barn primarily works as the greeter at the front gate. The other cat, Pippy, (who the goats would not sniff like this) is a deadly killing machine (we have had zero bear attacks since she came to the barn). In all seriousness we once lost our flock of chickens after a red-fox got into the henhouse, and ate them, she stalked the fox (right in front of my wife who was riding on the trail) and tore into it (it had no idea what was happening - Pippy went full berserker and just ran headlong at the fox and pounced with claws and teeth - it has not returned). She occasionally tries to help woody out by putting a dead animal in his bowl. He comes and gets a human with “the crazy lady put another dead thing in my food dish”…

Your goat stories make me smile!

Nigerian Dwarfs? We have 6 of them. Absolutely love our goats. We have 2 males, 6 females.

Hopefully carefully separated. We have the 2 girls because the owner of that farm didn’t quite know where babies came from and that one male was living his best life and there were 16 babies. The boys are wethers but the girls are intact.

I have a couple to hold things down when it gets windy. what is interesting is that they are a spiral and go in like a wood screw very smoothly and come out the same way but only with a long metal pole so you can twist from the center of the spiral. If you just pull from the center it has a hold on a very large chunk of even sand and resists pulling out very well. 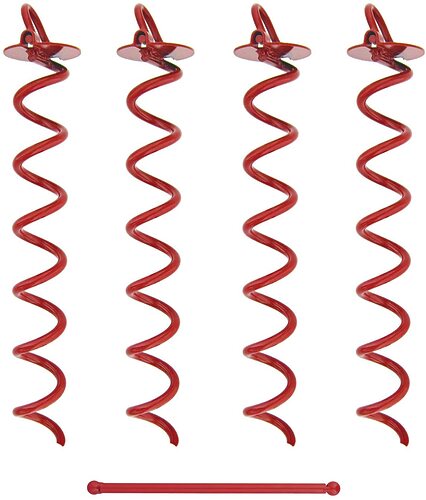 At my local petco the screw type were only for dogs < 50lbs. given the boys are close to 100lbs and incredibly strong (way stronger than a dog of similar weight) I went to the higher one. The biggest problem after putting this in, was how to get it out after. So I waited until after Ida had soaked the ground, then put a log down next to it, and used my Peavey (the luberjacking tool not a guitar amp) and put the hook into the anchor’s loop and pulled it up. Even with all that leverage it took a lot of effort.

put the hook into the anchor’s loop and pulled it up. Even with all that leverage it took a lot of effort.

The spiral ones are easy if you twist them but pulling like that would be similarly difficult, putting them in or out That is what makes the design work.