I’m jealous of the cool gear that board gamers get to use. After reading this post, I just had to make my own. By the time I got around to it, there were only a few sources of the round edge dice. The only 2" dice available were too expensive for my taste. However, there were 30mm dice, so I ordered them. Just on the chance that I would find them too small, I ordered some birch 1.5" dice that had crisp edges.

I designed a pair of round-edge dice and planned on 12 to be made at a time. Great design, and…I thought the package had 12 dice, but of course what I bought were 10 and my design was messed up.

There were 24 of the sharp-edge dice, and more room for design. Although I didn’t “go to town” on it (the design process was super simple; by that time I was in a hurry), the simplicity really makes the pair elegant (and put me down the rabbit hole.)

These are designed for weavers who occasionally get “weaver’s block”. There are so many choices of what to make, what pattern to use, and what color should be dominant, that it’s hard to settle on one combination. (This is where the rabbit hole occured, I’d only planned on the pattern/object pair. Then I photographed them and it became obvious I need a set for color.)

Here are the things to make: 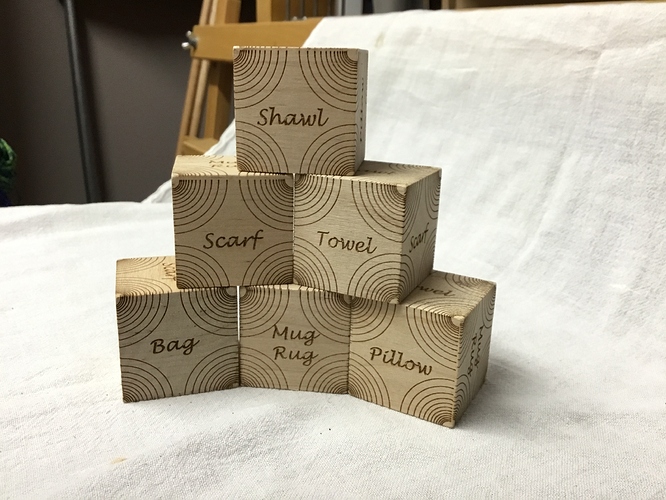 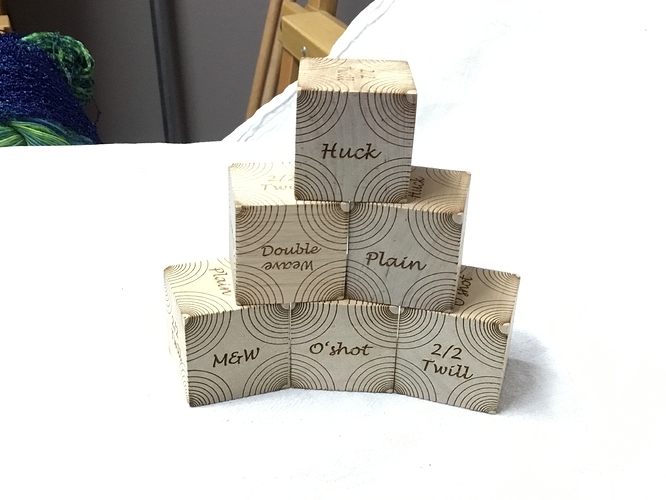 IMG_14763264×2448 928 KB
Yes, “Double Weave” looks odd; I intended that. Double weave is a technique of weaving a cloth wider than your loom, or creating a mirror design on the reverse, or creating tube/pockets/finished openings in the cloth.

How the pair would be used. 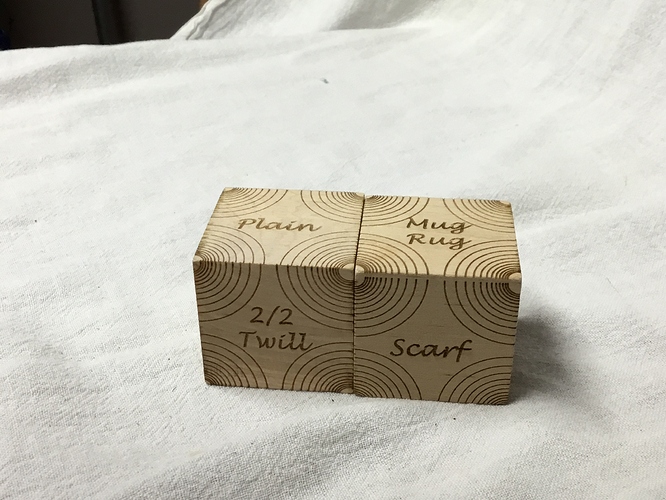 There were other types of weave I considered, but they weren’t practical for the things to make except for an advanced weaver or one who had at least 16-shaft looms.

The colors will be made next. Red, blue, yellow, purple, green, orange. If the weaver winds up with a color they are not fond of, then it’s a good challenge to figure out how to use that color in a pleasing way.

I don’t know if I want to sand the edges or not. Personally, I don’t like the sharp edges. Sanding would also minimize the mis-registration. Some cubes were slightly off in one dimension, which made them fit differently into the jig each time. They were rotated physically, and moved clockwise w/in their group for each face.

Cool! I need to make a set for my hobbies. Sometimes I can’t decide which one to do next.

These are great dice and decision makers.

Here is the final iteration. I upped the power and slowed the speed a bit so the engrave would be darker. Also rounded the edges and corners, then gave a light coat of mineral oil. 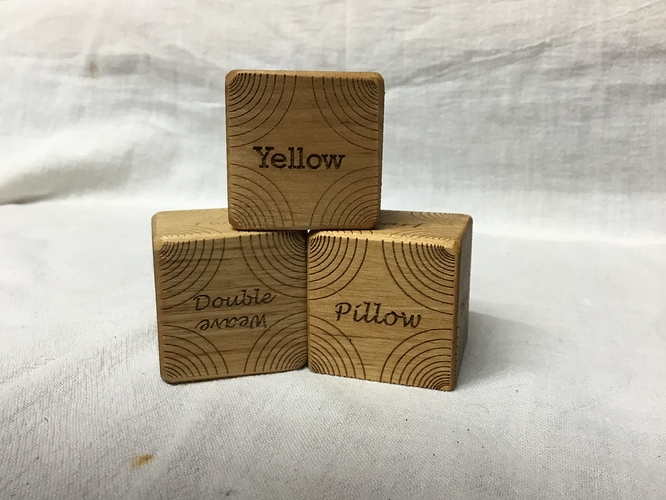 Love the look of the corners.