Wedding gift for my cousin

My cousin Pete married married his love, Morgan. Reception was last night. Wanted to make them something unique. Now, I’ve made several coat of arms engraves for people the last couple of years, so that was pretty much my first thought. So I looked up the Zielinski coat of arms. 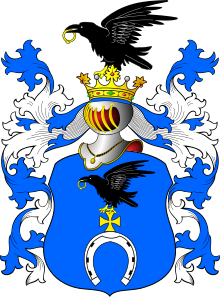 I also read about it. Turns out the horseshoe is not white, but described as silver. And both the cross and ring are gold. So that immediately got me thinking I’d use my laser foil. I already had gold, but this gave me the excuse to get some silver. The stuff’s a little pricey, so I need an excuse.

I was a little concerned about how I’d pull this off. I mean, the gold cross sits directly upon the silver horseshoe. How do I get both foils in exactly the right spots. Well, I thought it through, and I did it this way… I setup my design so that every element was just black. Then I also made copies of the elements in another color where I want to use the foil on so I could have separate control over them. I’ll tell ya… This worked perfectly. I secured the piece to the bed with Gorilla Tape because I couldn’t have it move at all while I messed with it in between engraves. I engraved everything in black. Which showed me exactly where I needed to lay the foil down. I carefully put the foil right over top of the already-engraved objects. Then I re-engraved just those elements, took the piece out, and removed the excess foil. Looked great! Couldn’t believe how well the plan worked out.

Pictures never seem to do laser foil any justice! But, trust me, the stuff is cool. The Zielinski shield color is blue. I didn’t want to paint the blue as I wanted the wood grain to come through. I considered Sharpie, but then I found Michael’s sells blue stain, and that’s what I used. I’m not the artist my Mother was, so trying to stain around all of my elements was a real challenge for me! But, I was satisfied with my stain job. And then I sealed with lacquer which brought out a little of the wood’s color and grain. I’d considered staining outside of the shield to darken the wood a little, but I didn’t want the words to get lost, so I just left it unstained.

I wanted to do a 'forged keyhole slot in the back to flush-mount it. But in testing I couldn’t get the depth I needed for that, even at 100/Full. Maybe multiple passes could have worked, but I didn’t have time. I could have quickly designed my own, but instead I used @jbmanning5’s surface-mountable keyhole shapes. I also created blanks to use on the bottom so it would rest flat. As is my custom, I laser-scored them for proper gluing. 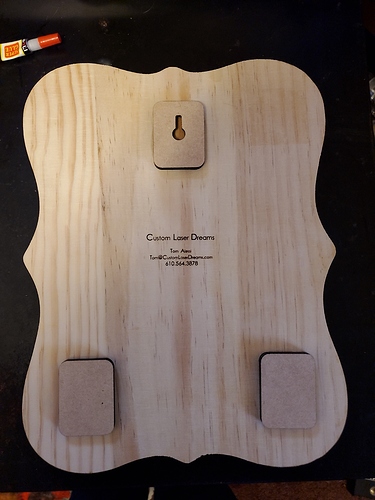 ADDITIONAL READING
In working on this, I learned a lot about the Zielinski name and its coat of arms. And it was fun to learn it as well as pass that onto the family.

Zielinski has its root in the Polish “zielin” which means “green.” The interpretation of “green” as it applies to people is open for debate. The least-attractive is that it refers to a person that appears green or sickly. But let’s leave that one and move on, shall we?

It could refer to somebody that’s “new.” It could also refer to a fertile, green land where the family came from. Or that the family were farmers. And, ultimately, it could mean the family practiced medicine, using herbs to heal people.

The coat of arms itself is very unique. (Or maybe it’s not unique, depending on how you want to think about it.) As you may know, many families have their own unique coat of arms. Mine, for example, is yellow and black and is an arm offering stalks of wheat. I never looked up its meaning, but I like to think it’s a symbol of generosity. The Zielinski coat of arms, however, is shared by more than one family. More than 100! In fact, 993 families share this coat of arms! The reason is simple… They all stem from one original family… the Ślepowron, or Korwin family. As the Ślepowron family grew and migrated, they began to take on the names of the towns they were in, or other reasons to take on different names (profession, nicknames given by others, etc.).

The romanticized story of how the crest was created goes like this: A handsome knight from one of the Korwin families married a beautiful daughter of the Pobog clan. He redesigned his arms by adding the horseshoe and cross of his bride’s coat of arms to his own raven with a ring, thus creating the crest you see above.

I could go further into how they ended up with a raven in the first place, but I’ve bored you enough.

Nice gift. Thanks for the write up. I agree that laser foil is a great addition to many projects.

For future reference, watered-down acrylic has worked beautifully for me, for coloring things I make in BB without hiding the grain.

watered-down acrylic has worked beautifully for me

Boy, did they ever get a special gift! I really like how the foil turned out, and your scored glue lines are epic.

That looks great! What a great gift!

Wonderful and thoughtful gift. I hope it included a scroll with the family history.

Great work and thanks for the write up.

I hope it included a scroll with the family history.

I gave that serious thought! But in the end I didn’t have time to write it all up, put it on parchment, frame it… Fact is, I should have started this project a week before I did. Or maybe a month before I did.

Looks amazing! What a cool gift!

Fact is, I should have started this project a week before I did. Or maybe a month before I did

Make it for them for Christmas. Then tell them you wanted to make sure “it’d last” before giving them the whole wedding present

LOL!
(Had to give that more than a heart.)