So I am having a weird issue with some inkscape files. They are made of a rectangle drawn in inkscape and a png file saved after being opened from a PDF and flipped in photoshop.

The first one in inkscape says the box is 4.8"x3.9" but when loaded into the glowforge it loads at ~6"x5". The second file I made by adding a new PNG to the file and just resizing the box and doing a save as to make it a new file. This one loads into the glowforge at the correct size.

I assume it’s an issue with my PNG files but not sure why. Both files are in the attached ZIP if anyone can help.
shadow spare parts cutout reverse w legend.zip (1.0 MB)

It’s weird. Both of them have an SVG comment that says they come from Adobe Illustrator 16.0.4, SVG Export. Perhaps Inkscape preserved that comment from an earlier source file?

I’m not sure which file is which from your description, but when I load them into Inkscape 0.92, I get the following dimensions for the whole thing (the rounded corner blue rectangle) like this:

However, both of them have their display units set to pixels so I changed the document property to be inches so I could see the dimensions.

Also, the “reverse 2” file gives me this prompt when opening it: 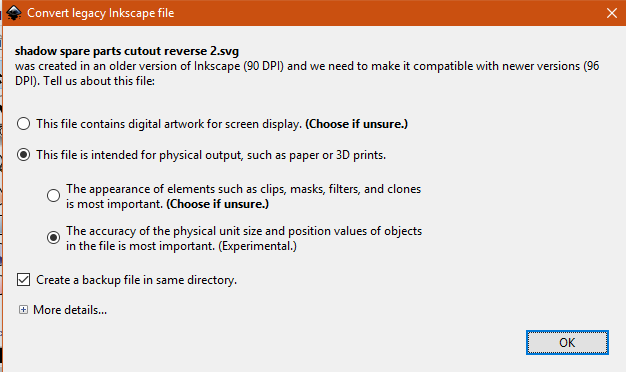 They both appear to load into the Glowforge UI with those same dimensions for me (unchanged from the source, I didn’t save the result of either the conversion or the display unit change).

Yea I think some of the weirdness is because I had to go from PDF to Photoshop to Inkscape to Glowforge. The base file did go into AI at some point when I had a friend flip the image file for me so glowforge could see it so that would be where that comment came from even though he saved it as an SVG.

The dimensions you got out of inkscape are correct. but I even deleted and re-uploaded the one that is scaling when uploaded to glowforge and it still scaled up for me.

I went back and did "add artwork for the “…reverse 2” and it comes in too large. Inside the file it is stored in px dimensions. If I open it up, change the document properties to be “in” and “save as” then it imports correctly.

I think it is a combination of the legacy file having 90 dpi and specifying it’s dimensions in “pixels” rather than “inches”. You should be able to fix it in document properties: 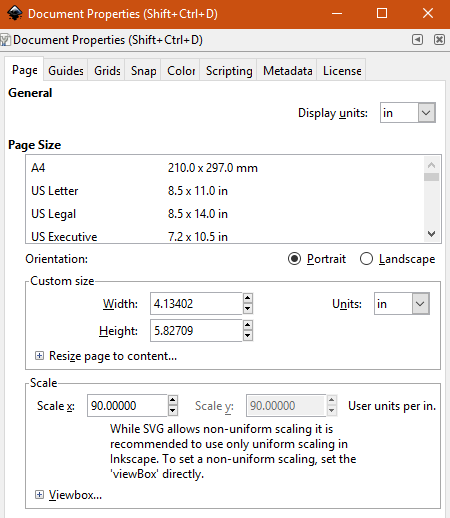 interesting… Thanks I’ll try that.