Weird one - center of mass of irregular shape

I want to make a “spinner” that can be flipped around to choose someone around a table. It will be an irregular shape. I know how to do it thru trial and error, but wondering if anyone has come across a way to to it mathematically - ideally just upload a pic and it shows you where it is.

I have looked online, not tried too hard, and this isn’t a major challenge, so I thought I’d just throw it up here…

I play team trivia with my ex, her brother, and a few others every week and we often joke that we need someone nominated to officially have the final say on our answer, so this is just a little toy to make it more entertaining.

Haven’t needed it, but there’s a solution if you use Fusion 360.

Apparently Inkscape has this as well. 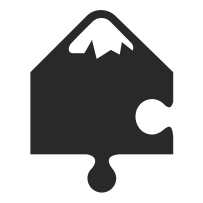 Steps to reproduce: Open Inkscape Draw a path (simple or complex, doesn't matter) or a shape converted to...

Perhaps there’s still a bug to work around? I didn’t dig deeper.

There are formulas, but they usually require some pretty hinky calculus or a bajillion data points. (I am assuming that is how the Fusion 360 does it) The easiest way is plumb lines. You need to dangle the shape and hang a plumb line from the dangle point. Mark it. Then dangle it from a different spot and hang another plumb line. Where they cross is the center of mass.

I’ve tried the built-in externsion for center of mass. On the current version, it just crashes. On older versions (you can have multiple versions of an app on a Mac) it does nothing.

I’m well aware of how to do it with a physical object but I want to be able to cut a small hole for a tack to use as a spinner.

You know, for all I use Fusion 360 I’ve never used this built in tool. Gonna have to explore it.

If you have the shape in a vector file and can save it as a DXF I can import it into my CAD program and give you the center of mass in about two minutes.

Oh, sorry. I had thought if you were aware of this neat trick, you probably already knew that, without computer aid, like an Autocad program of some sort, that you really only had 2 other options. First, if you have a mathematical model of the object already, you can just do a bunch of calculus on that equation and find it. But, given that you said “irregular shape”, I assumed you didn’t have the mathematical equation. So the second option is to divide your object up into different parts that you DO have (or can come up with) an equation and slap those into the calculus.
So, once you have worked that all out, here is a neat little graphic from NASA that includes the calculus you’ll need.

In all fairness, it would almost definitely be faster to use the plumb line to find the center of mass and then add your hole later, rather than trying to calculate it mathematically and cut the hole at the production step.
Hope this helps.

The shape is the national symbol of Wales - not too easy to break into geometric shapes. 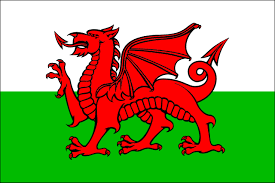 I’ve actually started writing a script to calculate the center of mass, but I get bored quickly. There’s no urgency to this…

The center of mass of the dragon is 49.9357% up from the end of the claw of the front foot and 50.3981 percent right of the left most point. The image I found may be a little different. If you want to cut out that specific image and post it I can redo the calculation. SVG or DXF are the file types I need.
I used the attached public domain image.

Thx. The reason I chose this is there are many possible “pointers”, it’s all just a bit of fun for our team. I can overlay the engrave detail and may even color it if I cut from wood instead of acrylic. Something to do over the weekend. We joke around a lot and assign responsibility for the final answer to my ex’s brother, so he can be the bad guy. Then I came up with this idea…

Finished toy. Thx for the help! 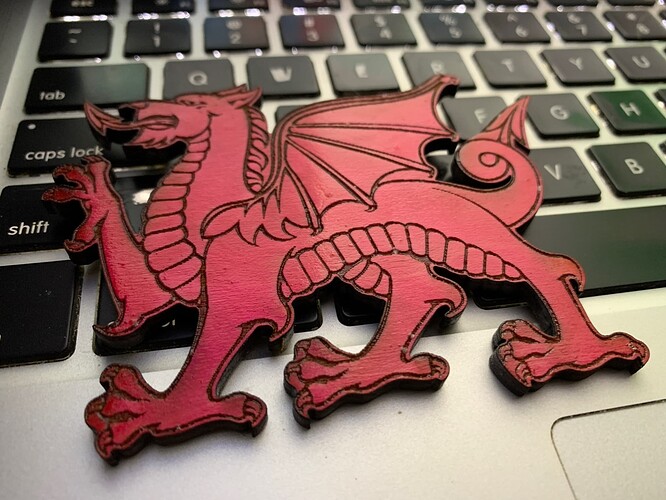 How does it spin? I am curious where the center of mass ended up being. (I assume roughly in the middle, towards the front.)

Pretty much. Instead of a tack, I used a silicone or similar “dot”, it almost perfectly balances on it and spins quite nicely. I scored the outline, used Ultra Dye to color it, then engraved and cut it. Then I dipped the whole piece in polycrylic so it has a hard, shiny surface. 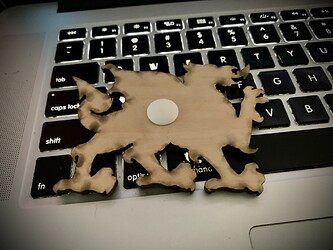 Very cool. The center looks further back than I would have guessed. Thanks for sharing!

(we can be our own worst critics… I should have at least engraved the loop in the tail, or cut it out. Nobody else will ever notice but now it’s bugging me!!!)