So the other day we got our xmas tree, and of course the stump was about a foot too long, so I cut it off before bringing the tree into the house. And then I had an idea.

Compound miter saw, sharpish blade and a little ignoring of safety rules led to about a dozen pretty smooth, damp slices of tree. 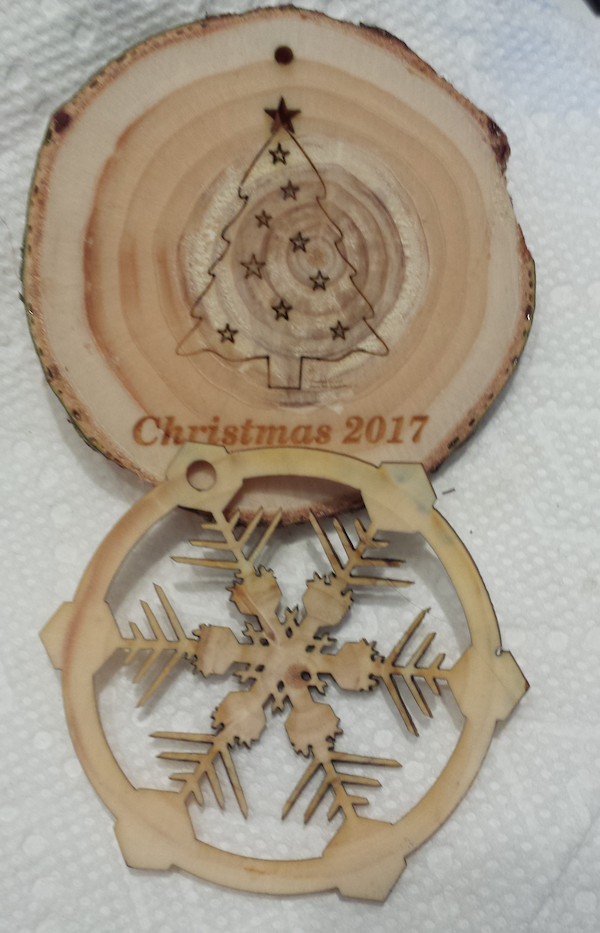 As you can see, the engraving and scoring quality is variable, politely speaking, depending on how much water/sap is in the particular section being zapped. The central half dozen rings or so were pretty dry. But all things considered I’m pretty happy with the results – they have a nice sorta rustic look to them.

And the edge char is pretty minimal, even cutting through 1/8"-plus, e.g. the star on top of the tree and the hanging hole… To the point where I’m thinking that if you could figure out a way to get wood to dry flat this might be a useful technique.

[Attributions: the tree is a slightly modified svg from the Noun Project, and the ornament is based on a file generated by the snowflakerator in Openscad.]

Nice! I like the varied effect of it - looks natural!

Do people think that spraying a very fine layer of water on the surface of dry wood (and then rubbing it in so that there are NOT any actual drops on the surface) might have a similar effect of preventing charring?

It’s possible. I am also wondering whether wood kept in a freezer and then zapped immediately might do the trick. Only experiments will tell.

keep in mind that most wood slices, AKA wood cookies that contain the pith (the very center of the tree) will very likely split, eventually. there are a bunch of ways to reduce the likelyhood and extent, but keep it in mind!

A bunch of the ones I cut have split. Lots of others have domed up. My guess is that if you cut something with a fairly open shape but an exterior ring you might be able to get a compression effect that would hold things together. (You’d need to put enough pressure on to keep it flat while drying but not enough to impede shrinkage.) Or not.