What an interesting accident

So I took an illustration, inverted it and 3D engraved it on medium basswood settings (on a random piece of non PG basswood).

I was thinking it might work as a woodblock printing test.

Unfortunately, no. The lines are way too fine for that at this scale. So I figure “maybe I’ll paint it white, then roll black over the whole thing, getting a positive’. I had a can of white primer laying around so I said “let’s see what happens”. I got a couple of light sprays in and just stopped because I thought it looked really cool. This is what I got: 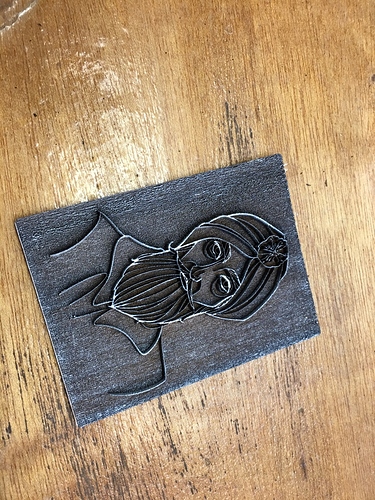 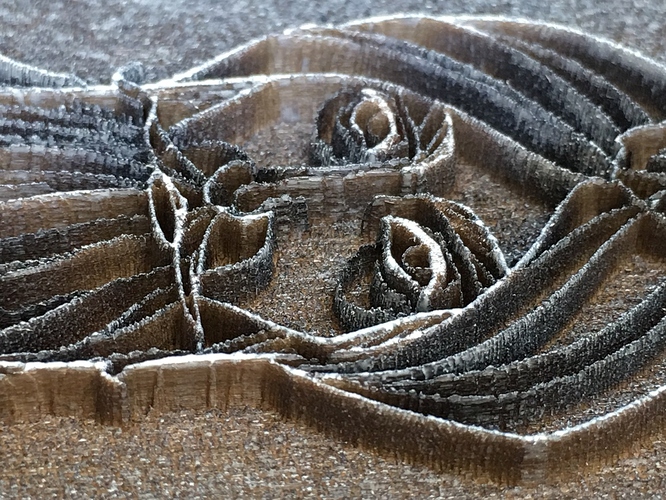 It’s like the primer sought out the upper surface, such an unexpected result.

I zoomed way in, re engraved and tried again. Provisional success on block printing: 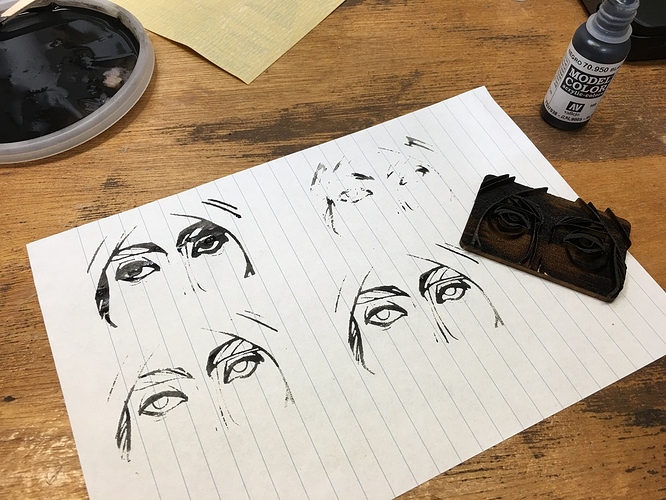 The bottom left one was the most recent, getting the amount of paint dialed in is tricky, definitely a feel thing.

This is just plain old acrylic model paint, watered down about 25%.

AFAIK woodblocks require way more presure than you would think.

The print looks great! Interested to see what other unexpected outcomes you stumble upon.

I did one little woodblock print at one point …I liked the draftboard for it better than the hardwood - it seemed to hold the paint better.

But yeah, took a lot of pressure.

It looks delicate but very pretty.

You know, I thought the same thing. It’s an original piece by my girlfriend, she was so pleased to see her digital art made into something physical

And she was as surprised as anyone about the gender flip when you zoom just the eyes.

It definitely requires more than a rubber stamp that would be more familiar. They’re actually usually a piece of wood, then piece of cushion, then rubber design so they’re even springier. There’s no give with a woodblock and very little with lino.

The back of an old wooden spoon works pretty well for burnishing the paper on the block.

@evansd2 All kinds of awesome! this is fantastic

<Bump> Seems like this would be great for charcoal rubbings, too!

looking at the closeup I see a lot of places there because of kerf the edge barely makes it. With a bit of sanding on a very flat surface and not hard enough to break a wall. and at the finest grit (2000?) you would have a polished single surface that my guess would print better than a variable height surface. Alternatively, or perhaps as well, a thin rubber sheet behind the paper might make up for such diversity.