What is this material?

I’ve acquired a quantity of plywood material that’s very laser-friendly, and I’d like to buy more of it – but I don’t know how to properly describe it to suppliers, so I was wondering if y’all had ideas…

…it’s three-ply plywood, birch veneer two sides, single poplar core layer, 0.201 inches thick in total. I’ve got sheets that are 12x16, 12x19, and 12x24. The edges look almost perfect, so I think it was originally purchased in those sizes, rather than broken down by a prior end user (the end user I acquired it from did not have a pro-grade cabinet saw).

I took a sample to a local esoteric plywoods supplier, who said he’d never seen it and didn’t know where to find any more (this is the same guy who said he stocked “everything”). From the sizes I suspect it might be used as stock for the bottoms of cheap cabinet drawers, but I haven’t had any luck there either (I am mainly finding MDF cores, and I like the poplar because it’s lighter and not as smoky when cut).

Seems like it ought to be simple to find, but I’ve checked most of the wood suppliers listed here without luck yet. It also doesn’t appear to be the same as PureBond, although I am still trying to find a decent sheet of PureBond in order to compare.

Any thoughts? It’s decent stuff, and really seems like it should be easy to find so I frankly suspect there’s some code word I’m not using when talking to people. I acquired it as cast-off material, and the person I dealt with didn’t really know much beyond “I was told to get rid of this so here it is now take it away”.

(I can attach a pic if really desired)

Where’d you get it the first time?

Is there a particular advantage to it over using (more easily sourced) Baltic birch ply? (although Baltic can’t match that thickness exactly, it’s 3 or 6 mm, which is like .12 and .24 inches respectively)

Curious what you think of it.

The main advantage over the usual birch ply is that this stuff is almost perfectly consistent – there are no voids, glue pockets, knots, grain direction or anything to interfere with a cut. Similarly, since the poplar has minimal grain, I can cut pretty small shapes without having to worry about planes of weakness causing a feature to snap off. It’s basically like fairly high-grade MDF ply, except that it weighs less and doesn’t smoke/char as much.

I got a bunch of birch ply in the early days, but once I found this I more or less stopped using the birch entirely.

…I got it from a liquidation, and super-cheap because it was sliiiiiightly warped (everyone else fought over the superflat sheets, but I can trivially fix these by putting them in my press). I’ve got almost a ton of it (literally) but at the rate I’m going through it I know I’ll need more one day.

I’m gonna see if I can find some of the Columbia stuff locally (insert curses about Home Depot apparently being the authorized retailer).

I’ll also see if I can re-contact suppliers and ask for hardwood core ply.

…still, it’d be great to be able to order a crate of this in 12x16, if I could only find it! If I do manage to ever find any I’ll let folks know, because dang I love this material. It’s nigh-perfect plywood.

My latest batch of B/B grade (not B/BB) birch ply has been amazingly consistent, as well. I’m considering hoarding it. I have something like 70 GF size sheets on hand and am thinking “do I need more?”

The odds are in your favor. 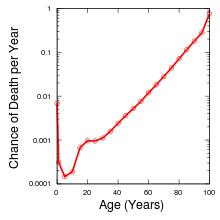 The Gompertz–Makeham law states that the human death rate is the sum of an age-independent component (the Makeham term, named after William Makeham) and an age-dependent component (the Gompertz function, named after Benjamin Gompertz), which increases exponentially with age. In a protected environment where external causes of death are rare (laboratory conditions, low mortality countries, etc.), the age-independent mortality component is often negligible. In this case the formula simpli The Gomp...

Is it possible that you have somehow gotten a batch of what is called Laser Ply? I source my ply from a place in the UK called Hobarts. I live in The Netherlands so it might be tough for you to get it from them, but you can see the descriptions. They call the wood they sell laser ply. I have found their stuff to be very reliable and easy to cut on the GF. I have used there 3mm and 6mm poplar and birch ply. I have tried to find another source of the product (mostly due to Brexit!) but I have not been able to find one. I can’t think they have a monopoly on this. Perhaps you happened on some. There must be a supplier of this somewhere…

Hmm. I have started to wonder if maybe this stuff was special-order or something; I’ve found a few references online where people talk about resorting to custom ply manufacturing orders in order to guarantee quality for laser work… I just sorta assumed it was mass-produced for cabinetry based on the sizes, but maybe not!

The thinnest ply on that web site is 1/4"

With nominal sizing, that might very well measure out to actual sizing of 0.21 or 0.22 inches. (Quarter inch plywood is rarely exactly 1/4 inch thick.)

The thinnest ply on that web site is 1/4"

The 1/4" birch plywood sold at my local Menards, which lasers really well, is 3/16" thick.