What to do when a low-power engrave comes out inconsistent?

Has anyone found an issue of low power engraves going lighter mid-engrave?

I had run a test of an olive art drawing/engraving converted to BMP using the 50% threshold, so there is only black/white data in the source file. 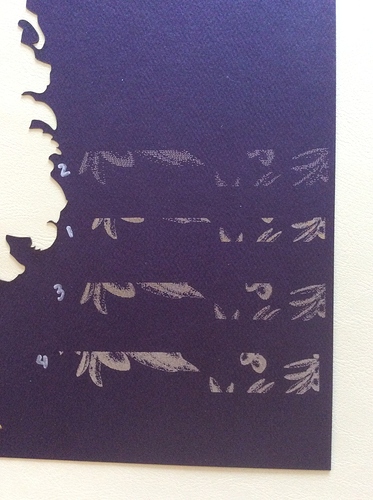 I first ran test runs on scrap of same manufacturer card stock to get a feel for quality/speed tradeoffs to get the effect I was looking for. I chose #3 which has speed 300; power 3; density 100 (dots); 125 lpi. This yields an 8x10 engrave time about 1hr45.

I chose a medium olive stock for my final project, but found that I had non-uniform art contrast across the sheet. It started off saturated like intended, then went lighter for a while, and then ended off sort of between intended engrave contrast/density. 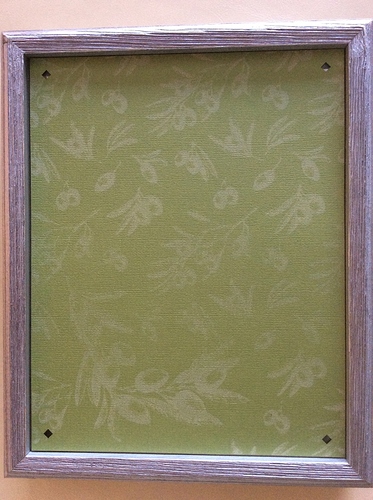 So while uneven across sheet, I was concerned that difference was exacerbated by stock color. So I began re-running the file this morning on a dark olive (same manufacturer). (Though the olive looks about the same in this photo under the bright Glowforge lights, it is noticeably darker in person.)

It started out with the art looking much more contrasted, like hoped for, but turned “washed out” even quicker than yesterday’s engrave run: 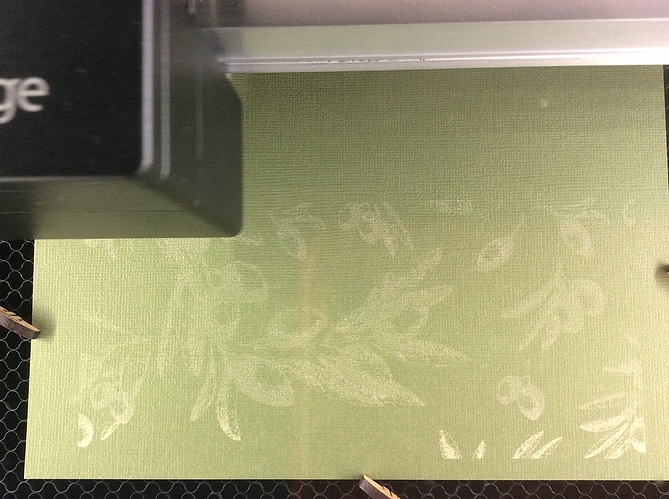 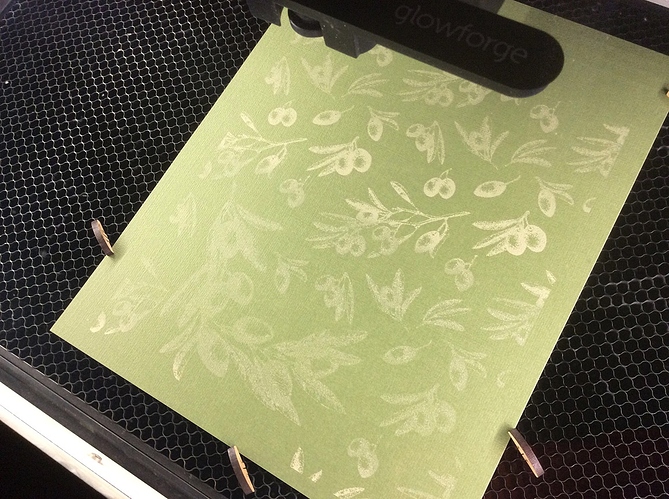 And here are the two engraves after finished—with contrast issues showing up in different areas of the sheet despite the same art: 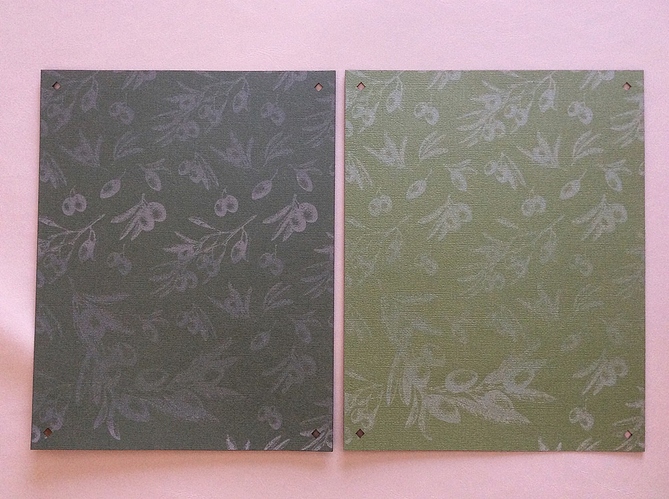 Does anyone have any idea of what may be going on? The sheet is held down by multiple hold down pins so the sheet is laying flat and is unmoved by the fan. All lenses have been cleaned two days ago and have run a couple other engrave/cut projects; the PG Plywood and Acrylic have generally been performing as expected: 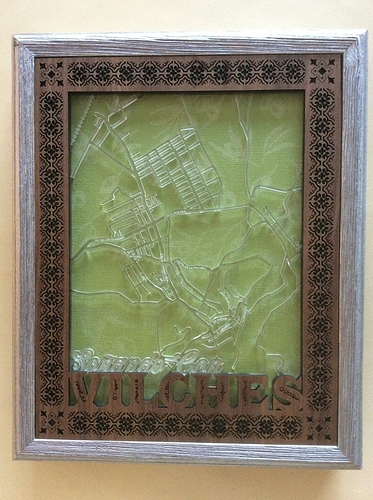 So I am stumped regarding these low power engraves. It’s frustrating to waste material costs – though on textured card stock is cheaper than PG wood – but more frustrating to have the time wasted, too.

Because the color is not consistently in the same place in the engraving, I suspect it is caused by the material and not the laser. The underlying material may have a different density or something. It may also be moving during the engrave.
If it were the laser I would expect it to be in the same place of the engrave, all other points being equal.

The stock is definitely not moving, but whether the material has density consistency issues, I couldn’t say. It calipers evenly, but don’t know what else to try. My tests on the dark stock were looking consistent, but I didn’t run a whole sheet either.

I see the pins holding down the edges, but what’s keeping the center flat? The airflow in an operating GF can cause billowing in the center of even heavy stock, changing the focus and the results. Just a thought. I use a sticky mat for all paper and fabric projects.

Hmmm. That’s an interesting theory. Thanks.

The stock didn’t appear to be billowing or moving as I was watching it run, but maybe it’s not something easily seen by eye.

Could having outside wind (it’s been stormy here the last two days) create any air pressure changes down through the venting hose that could contribute to your “billow affecting the focus” theory?

As to your solution: Are you talking about one of those laser self-healing pads? Or something you created with something like a reposition-able glue spray?

Movement of a few thousandths hundredths of an inch can do it, I use a DIY pad made from Baltic ply and spray adhesive, but I plan on getting a better pad soon.

Thanks for that suggestion. You’re using the moveable spray mount, yes?

And when you burn atop a platform like that do you still just set your thickness to the weight of the paper so that the laser doesn’t cut through your board—or do you set the thickness as both materials combined and then just adjust your speed/power combo to prevent doing too much damage to your ply?

Spray mount, yes. Measurements must include the pad, but you set the power & speed to those needed for the actual materials.

Movement of a few thousandths of an inch an do it

I don’t know the cause of what @quixotequest is seeing - height changes can definitely do it… and working with extremely low powers amplifies it. I see this is a lot when I’m marking cotton bags. The slightest ripple and the engrave lightens up the engrave significantly.

What speed/power do you use for cutting card stock atop your ply? Atop the honeycomb I’ve been using 160/35 for a 0.014" thick textured stock.

Movement of a few thousandths of an inch an do it

It would be unfortunate if that is the case because the focus motor moves in 14 thousandths steps. Sheet materials can vary in thickness more than a few thousandths across one sheet.

So, gotta ask – is your post meant to help @quixotequest in any constructive way? My point was that minor, even barely visible, variations in height impact the appearance of engraves. Ok, I misstated the range. Fair enough.

But the point I was trying to get across is still a valid concern for getting good results.

Beyond continuing to bitch and moan about every. single. thing. GF-related, did you have a relevant post suggestion that would actually help @quixotequest? Do you have fun trolling posts such as these? Word is that you’re going to refuse delivery of your GF until the software is 100% complete, so why bother? The view must be pretty good from the cheap seats…

So, gotta ask – is your post meant to help @quixotequest in any constructive way?

Well I think it puts right misinformation. I don’t think a few thou will make any difference. The laser beam doesn’t focus to sharp pointed cone. There is straight bit in the middle giving some leeway. If it is the case a few thou make a difference GF (or any other normal laser) will never be able to engrave consistently on common materials.

I think it is more the case that it takes a few hundredths to make any visible difference and that is achievable with common materials and the GF focuses with that sort of precision.

It’s as if the entire point of @dwardio’s post went right over your head. Gees…

So you also think correcting misinformation is not helpful to @quixotequest and is trolling? Gees…

If you want to believe a few thousandths is going to affect an engraving that is up to you but it is misleading to @quixotequest and doesn’t help solve the problem.

I’m not talking about information or misinformation. I know you’re a very smart person…smarter than the average and I would never assume to contradict much of anything you say…but, you come off with a dour and off-putting attitude to go along with your intelligence. There are many ways to get your point across without so much negativity. I’m sure you’ll have a snappy comeback, but I’m finished with my opinion on this. You seem to be a very unhappy person.

You seem to be a very unhappy person.

Personal attacks are not welcome on this forum.

Personal attacks are not welcome on this forum.

but, you come off with a dour and off-putting attitude to go along with your intelligence.

There are many ways to get your point across without so much negativity.

@Scott.Burns, I know from personal experience that sometimes smart engineering types have real trouble with a proper exegesis of nontechnical writing so I broke it down into bullet points for you. @Xabbess is the last person that would make a personal attack on another person here. Read in context she is trying to help which was a mistake as some people just can’t be helped but I salute her trying anyway.

Ummm… I think you missed the relevant statement. I don’t think you can build “credits” to say whatever you want.

…and yet she did.

You have a real way with veiled insults.

Read in context she is trying to help which was a mistake as some people just can’t be helped but I salute her trying anyway.

I guess everyone’s line is different as I’d put it far blunter if I was to comment at all. There is no nice way to tell someone that they have an odor problem. I think this falls into that category.