What type of stone can be engraved?

Ohh and I’m told that Mother of Pearl lasers very nicely once you find the correct settings for it.

I also have an abundance of flat bone beads, as well as some odd bits of fossil ivory that I scored super cheap back in the early days of eBay. Faux scrimshaw is definitely on my to do list.

LOL, I have a pile of odd bits and scraps that I’ve been collecting so that I can experiment on them. As time goes by, the pile is growing rather large and unwieldy, so I do hope our lasers come soon!

Yes, I’ve seen beautiful results with lasered MOP and paua shell. Not sure if abalone is viable, though?

That should be a great show!
Unfortunately I can only speculate since I have no experience with a concentrated heat source like a laser.

From what I have seen, sedimentary stone seems to better absorb the heat and bleach the pigment as opposed to harder minerals like granite that microfracture the surface from thermal shock.
In both cases darker stone will give the best contrast. I have been gathering dark and multi-colored slate for engraving, I’m also anxious to see how jet reacts.

I don’t know how malachite would react or its potential toxicity, just that when you cut it you do it wet to prevent respirable particles for being airborne, not just because of the particulate but also because of the cupric content. It might react beautifully (bleaching) and the amount of gasses may be miniscule and not an issue.
Lapis is another that might hold promise, but all I know about it is even cutting it wet, you get the mild but unmistakable taste of sulphur, like a struck match. Whether or not that would pose a hazard to us or our machine I have no idea.

Coloring of minerals with heat usually require soaking in an oven or kiln. I may be mistaken but I doubt the amount of heat deposited by the laser would be sufficient - with the exception of some softer stones like turquoise where any change would be highly localized… like a slight darkening to each side of the bleaching.
Here, the settings may make all the difference. Like you and Ray, I look forward to experimenting!

Considering the proliferation of hobby lasers in the public, the show may be your best source of information. Gem carving has been practiced forever, and I would expect those craftsmen would be exploring the potential of the technology.
Please share what you glean from your experience!

Repair - the worst part of jewelry work! I have had constructed pieces collapse because I was using a ‘medium’ solder but the entire piece was built with 'easy.

The riskiest repair I ever did was a one carat diamond ring. Because it was an elaborate setting I was reluctant to pull the stone to solder it.
After researching I found it can be done with care not to shock the stone thermally - as long as the diamond is white and flawless.
Slowly bringing the work to temperature, focused on the joint to heat only to the flow point - as the metal reached red, I noticed the stone was the same color! Yikes!

I spent 10 minutes slowly cooling the ring pulling the torch further and further…
The operation was successful, but if I was ever to do it again, I would pull the stone!
I hate repair, and usually decline the task.

We all have some fun experimenting ahead of us!

From my stone surface melting experience I found that igneous rock, brick, and concrete work. Other stones work but I ran the risk of the surface flaking off as can be shown in the Linux penguin stone 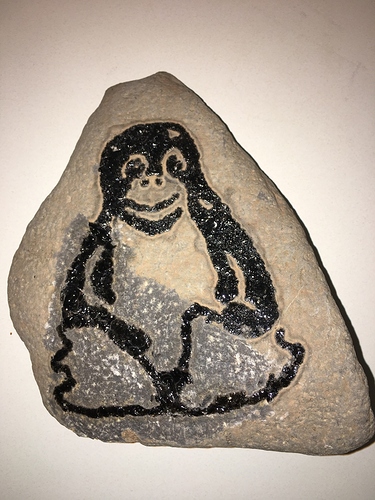 As a side note you can see a halo around it as well. This is from the stone getting close to but not quite the melting temp.

That’s what laser welders are for

you can weld very close to the stone with about no heat transfer. Also lets you do settings/assemblies that are difficult to impossible with the traditional techniques. They aren’t cheap though…(no I don’t have one).

Did anyone ever get around to trying out various stones/gems in the Glowforge?
The other day someone was asking me about engraving Selenite crystals, and I haven’t done anything other than wood, acrylic, and cardstock in mine yet. But it did get me to wondering if it is possible to do so safely.
My basic googling shows Selenite to be a Gypsum variety (CaSO4*2H2O) which is prone to fracture. I’m hesitant to go out and buy a slab of something that may kill me or my machine in the process (I have no background in stone or gem work, merely a moderate level of self preservation).

I wasn’t able to find any specifics in regards to settings for etching, but it apparently is possible given the large number of selenite laser engraved items for sale on Etsy.

Over the weekend we stopped at the local rock shop to drop off girl scout cookies and I picked up a couple of inexpensive polished slabs to experiment with. 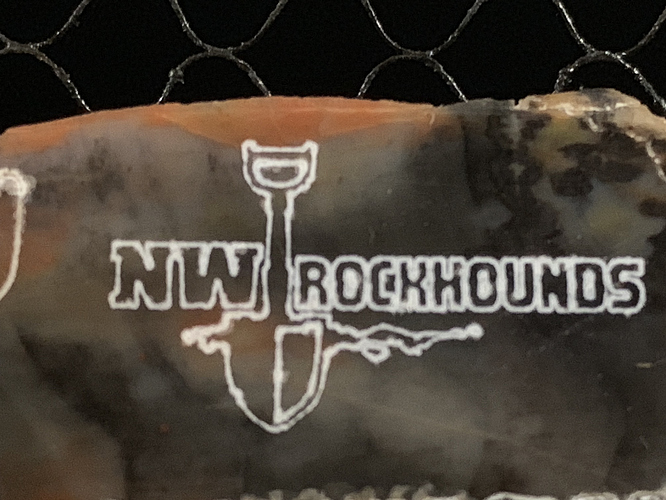 This is a very small engraving on polished Arizona petrified wood at 10 power, max speed. 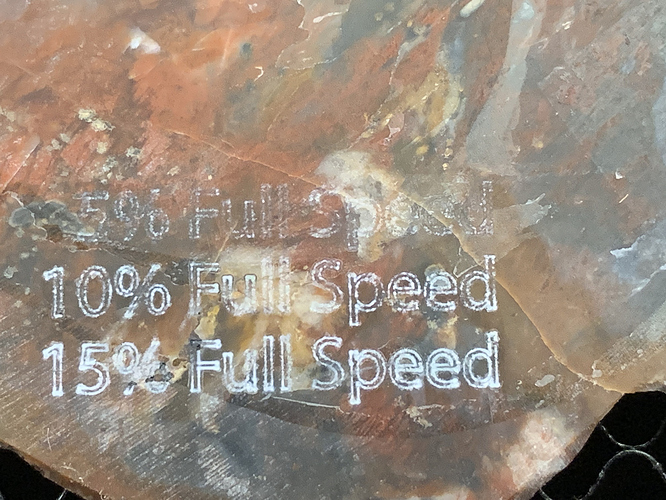 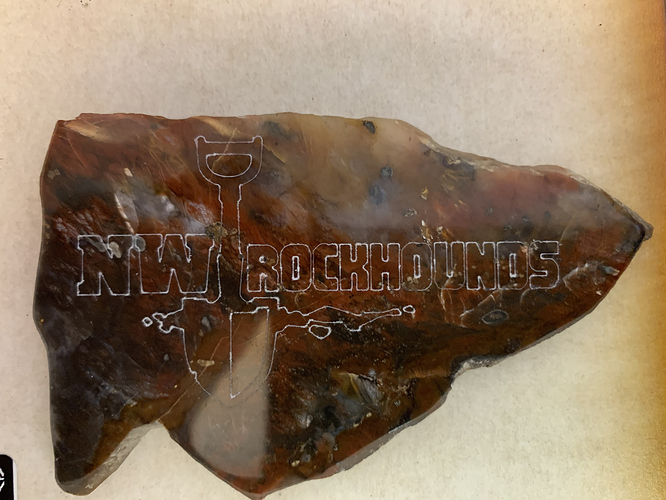 10 power full speed on the polished side.

The one item of note is that I went back and set the path size to 0mm for both of the last images. I also attempted to wait a few minutes and performed a second pass on the settings test, but it didn’t seem to make any difference.

At best these are just some experiments, I’m certainly not experienced at this point, and can’t advise in the areas of safety or possible harm from exploding rock. The one thing that seems safe to say is that it was very useful to try out different settings, and for a new type of stone I would initially start at the lowest power and highest speed (as appropriate for the hardness of the stone). One thing I wouldn’t try would be to do anything with opal given that I haver been advised to make sure it doesn’t get hot when polishing/shaping it. Additionally anything that would require a respirator when polishing I would never try to laser.

Very cool effects. I just came across this thread searching for lasering gemstones and couldn’t help myself but to try and re-revive it. Thinking about trying some onyx.

Can this be engraved with GF ? I found it in the canyonlands in Utah. 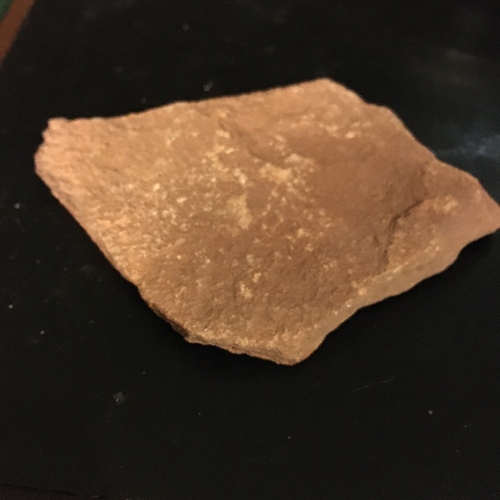 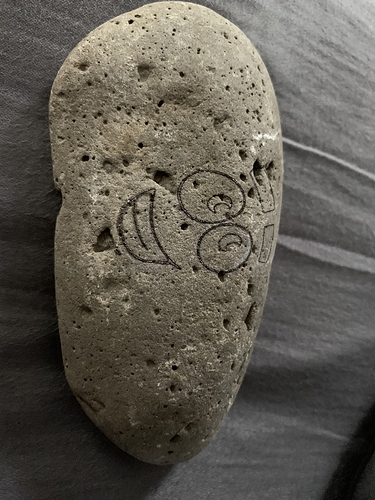 Can this be engraved with GF ? I found it in the canyonlands in Utah.

Well I am going to guess yes, but the only way to truly know is to throw it in the laser. One thing I note is the focus is going to vary a lot on that piece given it is a varied surface…

I’m not sure if this has been mentioned in the thread yet, but make sure that what you are about to laser won’t generate dangerous dust/particles/etc. Most are likely fine, but some of them can be very dangerous. This is a good article on the toxicity of different rocks/minerals, and has valuable links to additional information - https://www.gemsociety.org/article/gemstone-toxicity-table/

Sometimes being paranoid isn’t a bad thing, some of the things listed as bad I would never have thought might be. Be safe and create great things!

What a great link - thanks for sharing it!

I’ve had pretty good luck with smooth, gray stones that I find at the beach, I have no idea what their make up is or stone class but I know that contrasted stone like granite is awful the light and dark reacts completely different to the laser. 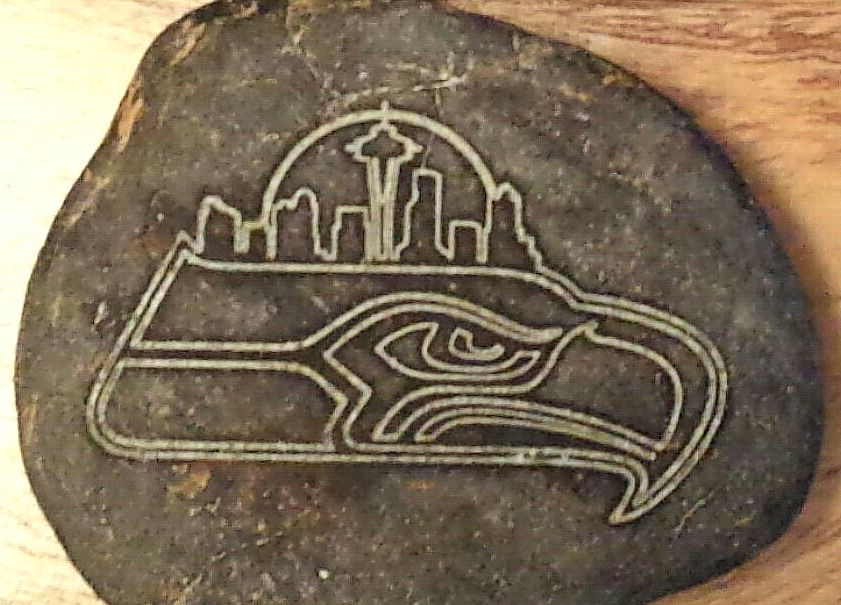 I don’t know why I never saw this thread but could add a lot, As with @PrintToLaser I spent many years cutting stones and making jewelry. It was a very funny story with the diamond, but I have known folk that put diamonds in the wax and cast them in place, It is a very special laser of incredible precision that gives large diamonds a serial number on the girdle that you need a loop to even see.

When thinking about engraving semiprecious stones Agate in most of its varieties would be my first go-to, My first avoid would be Lapis and all the copper minerals and any Sulfur or Chloride minerals, Some quartz minerals have a chemistry that is radiation or heat influenced, most notably the Amethyst or purple that will vanish with heat or get more intense with radiation.

I have worked a lot with amber and there may be possibilities, but good amber in a decent size is very expensive, and gravel level amber is sold as incense that stays burning once lit. Other than that it is acrylic.

When thinking about engraving semiprecious stones Agate in most of its varieties would be my first go-to,

Yep, agate works great. Better than any other stone I’ve tried. Here’s some dyed agate I tried back in the first month or so that I had my GF: 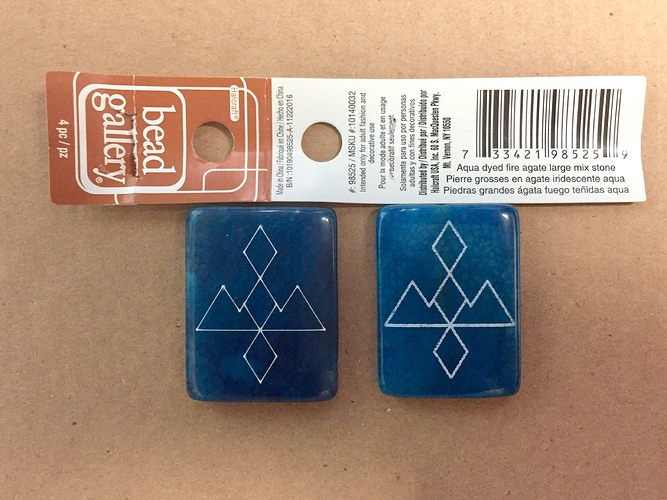 The one on the left is a score, the one on the right an engrave. Somewhat different effects; both are good, depending on what you’re going for. Note that this was way back in October 2017; these days the software has been improved so there won’t be those big blobs of overburn in the corners of the score. (The “clean corners” improvement fixed that quite a while ago; the Glowforge now ramps down the power as it slows down in the corners for a much more even burn.)