What would you make for a silent auction?

They are having a silent auction at work to raise money for charity. I work in a government office so it is a very diverse population. I have been asked to make something, but I have no idea what would capture people’s attention and bring in the most $ for the charity. The auction will be at the end of November/early December so I have a bit of time. I am though new when it comes to making things on the Glowforge (I am actually still eagerly waiting for my machine to arrive) but I have used both Silhouette and Cricut machines as well as I have an embroidery machine so I’m hoping the learning curve won’t be that steep.

So what would you make for such an event?

He gas a lot of other projects that would be good too.

It would help if we knew who would be buying. Your coworkers, looking for something for their desks? If so are we talking top floor of the Hoover building, or a USGS office in Montana? Are you working for Cook County and this is a public-private partnership with a black tie fundraiser? Or the administrative building for the Chicago public schools?

Considering the timing of the auction, something holiday themed should go over well.

Maybe the donated item could be something personalized? Maybe a set of coasters, tree ornaments, a wall plaque, or ??? that will be personalized for the winning bidder after the auction. Make a prototype of the project so they can see what they’re getting (and maybe the prototypes could be auctioned off as well [bonus $$]).
Market the personalization as something people can do for themselves or to give as a gift.

If it’s a government office that people are proud to work for then an engraving of the logo could go over well - depending on the type of people you could make it a coaster, or a business card holder, or a name plate (where they can add their name on a piece of paper that slides in)

If it’s a government office

If it’s a government office

You might have a look at some of the designs on Etsy for boxes and such. I’ve made a few of them, and have mostly been pleased with the results. Some are quite elaborate, and would look nice with wording or images added…also, leather covered journals would be impressive, and they are fairly easy to make.

I also come from the Silhouette/Cricut area of crafting, and have found that Silhouette Studio works well for designing much of what I want to do on the Glowforge. One caveat, though–purchased Silhouette designs can be saved as .svg files, but end up as dashed lines in other programs… You can edit .svg files from elsewhere in the Studio software and save it as .svg and use it freely, but the ones you buy from Silhouette can’t be used except as dashed lines…I learned this by making a box with a jaunty rooster design (from Silhouette) on the lid, only instead of engraving, it just outlined the rooster with the dashed lines… 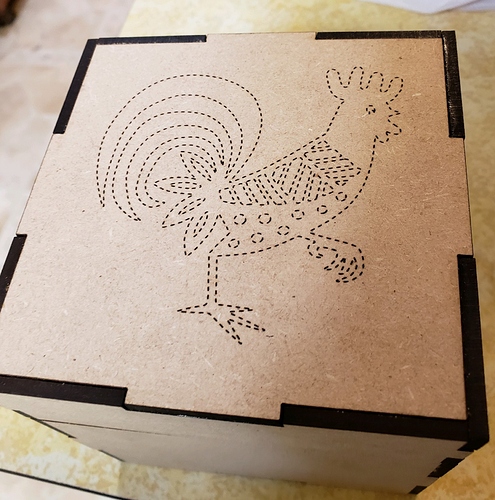 Feel free to ask me if you have any questions about using the Silhouette Studio software for Glowforge designing…I have at least some of the answers and a couple of months’ experience.

I kinda hope that box ended up going to an embroiderer - you stitched a pattern into the box!

It should, shouldn’t it? Right now it has hold down pins and the small corner gluing jigs in it, 'cos I was disappointed in the rooster and didn’t want to paint it up and use it as a gift.

I’m thinking it wouldn’t be too hard to figure out how to turn that into either cut lines or engrave areas in Illustrator. If you’d like to send me a representative file via Private Message, I’ll be glad to give it a shot.

Lots of ideas in made on Glowforge category