I’m interested in a comprehensive list of what hardware and software features were promised at purchased that aren’t currently being delivered 100% as advertised.

There is an unofficial list here: Glowforge Features promised / delivered

Still beta software. the company decided the hardware build was good enough to ship since the software can be pushed out later, otherwise we would all still be waiting.

They way I see it the hardware and the software go together. Two years later, both should be at least meeting the base level specifications.

I know they aren’t, but I think it is horrible management, planning. and execution. I think they jumped the gun when they sold the pre-orders. They weren’t far enough along to have any idea of what was in front of them.

Two years later, both should be at least meeting the base level specifications.

I can’t disagree with that, but I’m really glad they didn’t decide to not ship anything until the software was polished.

But they didn’t sell pre-orders. The campaign was labelled as crowdfunding which is very different and promises very different things than pre-ordering something. Isn’t this the risk you take when you agree to back something like this?

Glowforge has used the term Pre-Order in their own press releases. 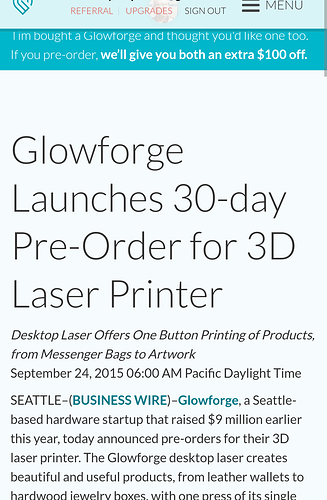 Is that Glowforge though or was that Business Wire? Repeated on the Glowforge site maybe?

And let’s be honest, given how prevalent the ‘crowdfunding’ campaign was, did you honestly get confused?

To me personally, it’s semantics. But, this was a press release they reposted from businesswire. Typically, it would be filled with information that they had provided to businesswire. So, if you are stating that there is a difference between crowdfunding and pre orders (as you seemed to imply in your post), then here is your proof that they had referred to is as a pre order.

I read up on what was going on before I gave them money. I, therefore, pre-ordered a gf.

Just like calling it a 3D printer does make it extrude, calling it crowdfunding doesn’t change the reality that it was a pre-order.

I only meant semantics for my personal situation because I don’t plan on changing my order status regardless. Sorry, I tried to emphasize that but I guess it read differently.

I understand your issue and I definitely think it was marketed more as a pre order than a crowd funded “concept”.