Whats the difference in these two tiles?!?

Whats the difference in these two tiles?!?

OK, So both of these tiles came from habitat for humanity at different times.
I engraved a picture onto the one on the right and LOVED how it came out and was looking forward to making more. I went back and bought a box of what looked to be very similar tiles(one on the left) because they didn’t have any left of the first kind I had gotten. I have tried about eight different tiles from this box with different setting and pictures and haven’t gotten anywhere close to the same results.
I have even tried 5 different tiles that I got from Lowes and Home Depot with results no where close to the first.

I looked around online and found tiles that are made to be laser engraved but they are like $85 for 15 of them!!! I paid a buck for the one tile.

PLEASE someone tell me what kind of tile this is or what I am doing wrong.

I will say that the tile that worked good has more of a matte/semi gloss finish and doesn’t have that super gloss from a glaze or something on it.The one on the left was only able to be seen with the light at just the right angle. I tried to darken it with a sharpie but that only made it a black square. lol 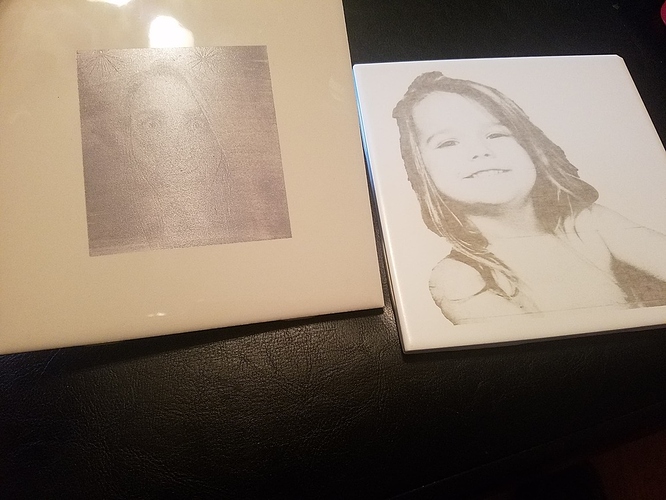 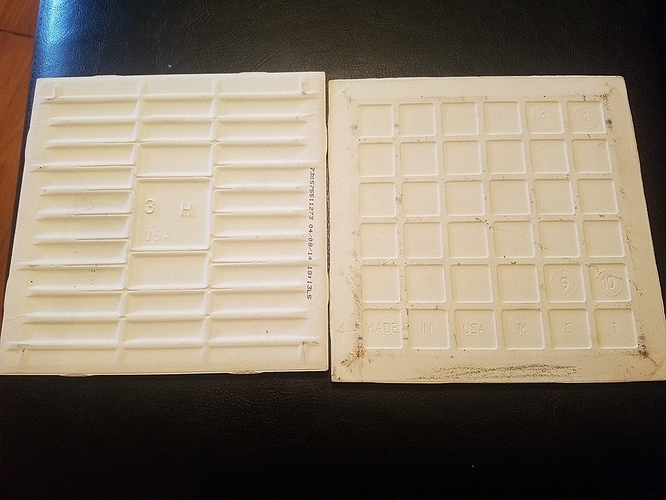 Huh. Could it be a difference in the photo you used? I just get the el cheapo shiny glazed white ones from Home Depot. This is one I’m working on right now: 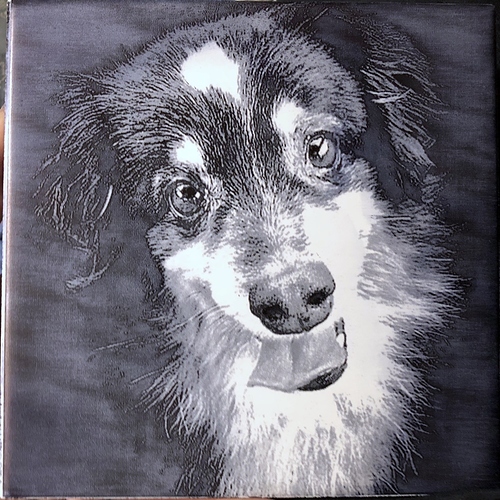 it’s really hard to evaluate what might have happened without seeing the original images you used or the left tile before you sharpie marked it. since you used different images, the images themselves could be the main difference.

I tried the original picture on some and it had the same results.

Wow, I didn’t realize that was without sharpies. I haven’t seen any that will give that kind of result without being LaserTiles – I think you got lucky!

It woud have really helped to compare if you used the same image on both types of tiles.

But the thickness of the glaze is likely the first factor. I tested some tiles I had around and had similar result as your first one–great image, no sharpie needed as laser reacted w/ the glaze itself to create a grey spot. Did not penetrate thru the glaze.

I personally don’t like the looks of the cheap tiles folks are using from stores–though they have some great results, but the glaze is so thin the laser penetrates thru the glaze and into the tile body… thus leads to another set of issues w/ the tile itself.

But there is a world of variations in clay types (soft body ceramic to hard fired porcelain) and the types of glazes, so alas, no easy answer, except to set up a test for each different batch of tile to figure out what setting & focal height you want to use…

And each glaze has different minerals in it that give it its color when fired, so it makes sense for different results. Best if you can find something w/a clear overglaze over any color, or just expect & test for variances between tile colors & even batches from same tile type!

Hi,
After I ran my own test, and then read about the special LaserTiles, I think they are just making the glaze extra thick. My left over tiles gave me a beautiful finish that just the “refiring” of the glaze, basically, under the laser beam created grey spots! No sharpie used. But nice thick glaze (this had clear overglaze on top of the color). 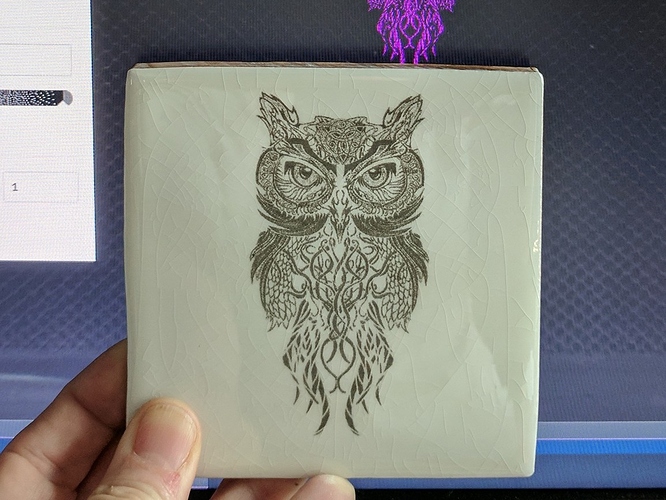 (accidently deleted a character so my upload didn’t work the first time I posted this).

this is not necessarily the kind of artwork that the laser tiles would excel at compared to a regular inexpensive tile.

try using a photo with shades of gray in it. that will look significantly better on the lasertile than on the regular tile.

you would not get this result on a regular ceramic tile. 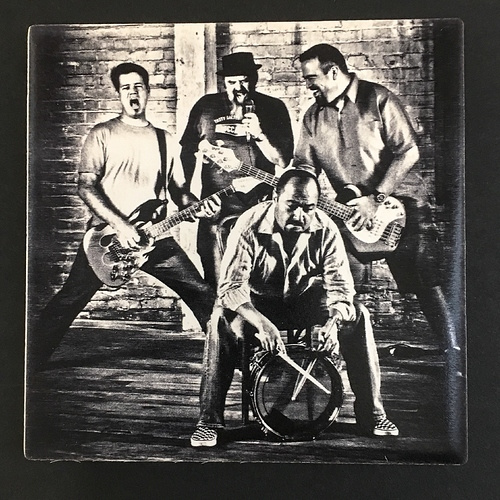 The issues revolve around just how the tiles were made every source would use different chemistry. Laser tiles have a special chemistry that what was clear becomes darker when hit by a laser sort of like your glasses that darken in sunlight.

The cheap Lowe’s tiles I have do not change at all and are pure white when lasered but the surface is roughened enough to take up the sharpie colors.

I have had others indistinguishable to look at them that almost seemed to oxidize when they are lasered.

I think they are just making the glaze extra thick

I don’t think that’s the case (from their website);

“…features a laser sensitive glaze. Using a specially developed process we call laser glaze, a high resolution photo-thermal reaction is created that embeds a permanent image onto the tile. The laser sensitive coating is designed to turn black in color when engraved with a laser. The glaze is never removed during the engraving process so the tile remains smooth on top and keeps its durability characteristics.”

There’s more going on there than an extra thick glaze.

I don’t think that’s the case

Neither do I. The ones I have show a slight yellowish discoloration over the tile surface under certain lights - I can see the laser glaze vs the underlying tile glaze at the edges.

Making me feel bad… I have loved what folks have done w/ coloring w/ sharpies and whatnot, but I’m not a fan of the edge from cutting thru the glaze into the ceramic body…

I have a product bookmarked somewhere, I believe, that might be what they are using. Or something similar.

They can ensure consistent results with their tiles, but any tile & glaze has a thermal reaction. If they require special handling in light (rather, keep it out of it), I’ll not be so skeptical about the photo aspect of their statement.

The laser is a point at a higher temp than the firing temp of the glaze, and so you’re effectively remelting and firing the glaze at a single point at a time (or a few, pending thermal distribution)…

Thickess & composition of the glaze is critical & they do have one that consistently works, but the result is not exclusive to their tiles, and a few of us have been lucky to get similar results on other tiles…

?? Sorry, didn’t quite follow your last sentence… did it get cut off?

Yes, heating stones can cause horrid results–often why jewelers won’t resize rings w/ stones… And some stones more ‘sensitive’ than others. And thanks to quartz, when can tell when asteroids have hit! (shocked quartz).

But different thing going on with glazes–which is basically fine ground glass–which is also why solvents don’t affect glazes. But they–solvents, or any liquid–can screw up/stain the tile body, since ceramic bodies are so porous, which is why you glaze them in the first place. (Hard fired porcelain is much more dense & less porous, among other things).

Thanks for showing this–wow! Best example yet of the phototile, and makes more sense as to the “photo” element for their tiles to capture grey scale & depth so well. I am humbled & stand corrected, you cannot get this type of result on non-special treated tiles.

Thanks. There are some other good examples around. They are a little more fragile. They can be scratched.