Whats the most nerve wracking cut you've had to date?

Today I’m fulfilling a custom order for 250 hex pieces cut on 4 sides.
I had to come up with a custom jig that uses snap marks so that I could use Cermark to permanently engrave some miniature bearing pullers for a client.

When the button was glowing and ready to roll… it was realllll nervous but so far it’s coming out perfect! 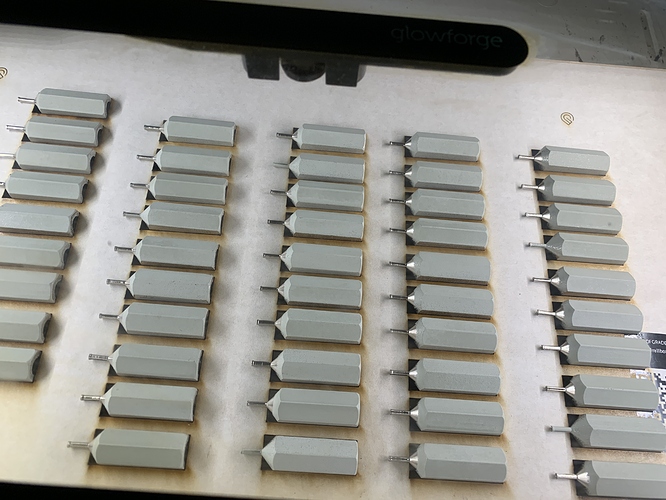 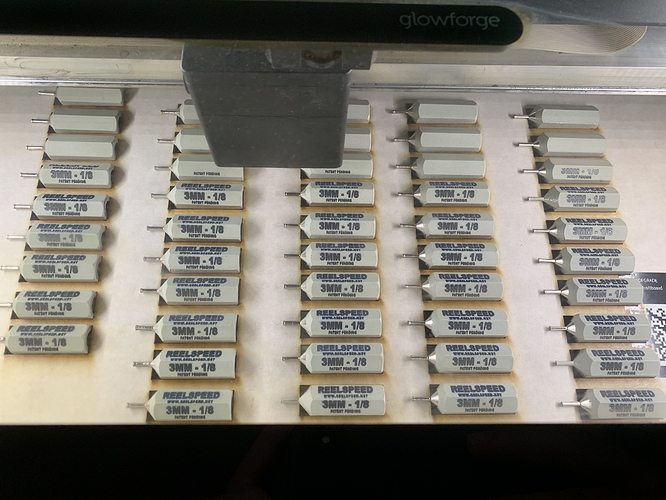 What’s the most nerve-wracking run you have had to make?

Really, though, any cuts I do either early in the morning or late at night. I messed up an entire sheet of PG because I forgot to turn a layer off. I had been making custom ornaments every hour I was awake, and one night it was like 1am and I was exhausted. Forgot to turn that dang layer off and ruined the sheet and wasted an hour and a half of work. Since then I’ve been more cautious, but I still find myself staring at my layers panels to make sure I didn’t miss anything while I’m standing by the button to press.

Awesome work, congrats on the order and the success!

Completely understand! I’ve lost a few sheets in the odd hours of the day

I think it was the time I made a bunch of ornaments to give out at my extended family’s holiday party. It wasn’t so much worrying about the results, but it was the first time I used the machine for many hours at a clip, with some baltic plywood I bought off the Internet, and unbeknownst to me, some of the tape on my ventilation hose had come loose. Whatever was coming out of that wood was so irritating, I had to put on a respirator to finish the job, and my throat burned for days.

Since I’m still such a newbie, every cut is nerve-wracking! But I’m really loving it so far!

I realize that time is money. Still, have been using the GF for over two years now and would never cut more than 10 items at a time. Too many things to go wrong, including and predictably user error. My nerves thank me.

Well with a major thanks to snap marks I just did 50 items cutting on 4 sides of this hex bearing killer laserinf two sides at a time and it worked flawlessly!! I’m stoked! 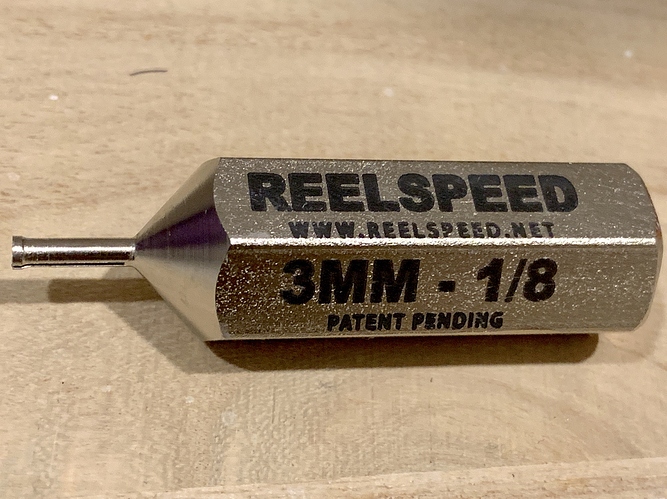 I realize that time is money

Wood and materials are money as well. That is an excellent use of the “pause” command as i can let it cut a couple of cases and hit pause after it finishes one and before moving to the next. then I can take my time observing how good the first ones cane out and before doing them all.

If I need to make adjustments that I have to start over I can delete the ones already done finish the rest and undo those first ones back into existence after the rest are finished.

Yep, those look excellent! (My worst cut was the first one on the PRU. I don’t think I remembered to breathe during that entire founder’s ruler print.)

My worst was the first production run with the PRU, those tokens for my Daughter. With the sheet of material held down on the tray, the first side engraved perfectly and cut after almost 3 hours, I flipped them all and enabled the second side engraving and ignored the first.

In the new bed image the design was displaced by a good 1/4" and I almost panicked!

I knew nothing had moved, and decided that trying to reposition the design freehand was all but sure to fail… So I pushed the button! Much to my relief the position was perfect.

That’s where I took the lesson that the original file placement and the after-image are not the same.

took the preview window away

I still really miss that, too. It was my back up for making sure I wanted to proceed.

My most nerve wracking was when I’d screwed up the first cut so I only had enough material left to do 1 more. Gah!

Though last night I did a detail engrave over something I’d painted…I really didn’t want to have to paint it again - so I didn’t even look at the preview (since I knew it would look off) I just slid them back into their jig and hit go (it worked!)

Two sides at opposite angles? That’s pretty impressive. I’d like to see a write up on that one.

Thanks! I’ll shoot a video while cutting my next round of them. I think it would be easier to show and explain. Butttttttt last night it wasn’t recognizing my snap mark all of a sudden? It’s my 3rd run and all of a sudden its not aligning it with the same document.

They had some Google Cloud outages last night that could potentially explain that.

mmmmmmmm that would explain a lot. It was between midnight and 2 am that I was struggling. I’ll try tonight!

Yeah, I gave up last night entirely - of course I’m not under a deadline so that’s easier for me!