Where do you cut first on a new sheet?

My cousin the goldsmith (well, my cousin the goldsmith’s husband, who was almost a goldsmith) once said that the first test he gave an apprentice was to hand them a piece of paper and ask them to write a note. If they wrote in a corner, he knew they had the innate frugality with materials needed to do a profitable job in the shop.

So every time I see someone cutting out a project on their GF (or another tool) I can’t help thinking about that, and about the inevitable waste bits of proofgrade material. Of course, if you don’t know what you’re going to make next, it could be that trying to cut frugally will also end in waste.

What do the rest of you think about this?

Everything my wife has made so far she has saved the cut offs and voids. Then after looking those parts she has come up with ideas on what to do with them. i.e. the hex’s of the bee box became necklaces. Inserts from all the acrylic waste from stuff I’ve cut has become custom xmas ornaments.

So basically, inspiration may not hit you immediately- but if you think out of the box you better duck.

This kind of stuff I’m actually really excited about. Sometimes the best flashes of inspiration come from pieces you think are garbage at the time!

On my k40 I generally start very top left and move outwards from there, as thats where the beam is closest to the mirrors which means less chance for power drop(not as big of a deal on glowforge, but still wise). Once I get about half of it used I flip the sheet over/rotate it and do the same again from top left. In other lasers you can also position numerically so it makes it really easy to repeat cuts and align stuff this way. I do miss that part about the k40…

That’s one of the things I’m excited about with the GF. With the laser I’m currently using at our makerspace, I plan out the cuts so that I use up as much of the material as possible. But that planning takes a lot of time, and I often end up with large pieces of off-cuts left over as well.

I save those off-cuts, but never end up using them. Since I only have the laser for limited time, I don’t plan around the off-cuts. I always plan on using full sheets of material.

With the GF in my house, I’ll be able to grab some off-cuts, pop them in and use the camera to plan where to cut things. I’ll be wasting much less material.

No experience with laser but with cnc intuition works well for me. I consider it common sense to start at an edge. The harder part for me is deciding just how small of a piece is still stock and when it is scrap. I think with laser I won’t need as much overlap for hold down so pretty much if I can see a thing in a scrap it is stock?

Now one big question for @Dan is whether once you’ve cut a chunk of proof grade, does the GF still recognize it as PG material? In other words if the magic barcode gets cut off, can we force the GF to know what PF material is in there?

For one that was not proofgrade. The 1/4" birch plywood is from home depot. Secondly as it sits if the UI sees the QR code it applies the right settings automagically. Otherwise you can pick it from the material list.

The visible QR code is an interim step until we perfect the process to apply UV barcodes across the entire surface of the material. At that point you'll be able to cut a board in half and use both halves. Lots of changes and improvements in store for Proofgrade. --dan

I'll give you more details when we roll it out.

I tend toward using the upper left corner as zero, and try to cut materials as close as possible to the edge.

My strategy with PG beta materials (if they’re still in beta with my GF arrives) will be to plan cuts to preserve the barcode as long as necessary. When I get down to the barcode area, I’ll either photocopy it and place the copy next to any un-coded scraps, or go ahead and cut around the barcode and keep it as a kind of fiduciary for the next batch of PG (double-checking that the barcodes are the same between batches of the same material, of course).

Can’t tell you how many times I have grabbed a piece of fabric and found a small piece of it cut right out of the middle(I have crafty Kids!) There must be something appealing to the center of material:grinning:

With my router CNC I use bottom left for 0,0. On the Knee mill CNC I always use the center as 0,0, But cut my blank to the correct size first.

With planning you can minimize waste.

Right now the width of the accessible material to process is bigger than what goes in the workspace. So the wide ends of the ProofGrade may get used last. I have used up the centers on some pieces to be able to cut the material in half and then used the ends, which aren’t too big, but make up a lot of material overall. I have found that in the six weeks I have had a Glowforge that the accessible bed has gotten a bit bigger for this pre-release unit. Either that or I am getting better at noticing these things.

The camera positioning allows for pretty precise placement to use up material efficiently. I can always find uses. It may take a while but I could just keep accumulating Scrabble tiles as I use up the odds and ends. On the other hand you can also design to use the whole workspace in one print.

In the following image, I cut it a bit too close at the top. I’m using a utility knife to score and cut bigger sheets. The side got a little splintery. I could have left a little bit more room for positioning. It would have fit but I needed to pay more attention to how square the material was. That’s where a jig or hard stops might be handy. Otherwise you just give a 1/4 inch leeway around the perimeter and you can do the whole piece and allow for fuzzy placement enough.

Layout in workspace before printing: 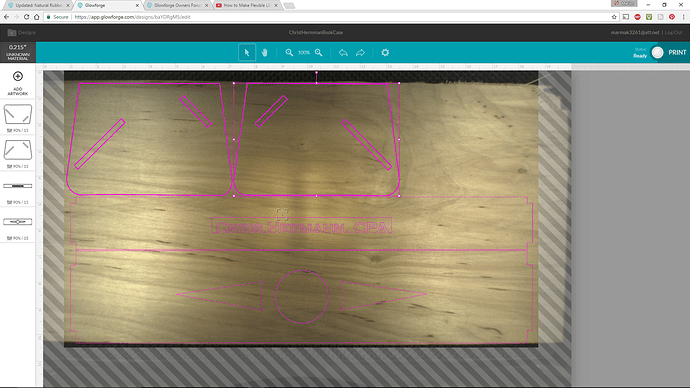 Results. It actually is a complete cut on the underside of the material. Here are the edges of that would have been at the top edge of the cut. The one bottom one in the picture displays the char of a complete cut through the thickness of the wood except for a slight triangle on the left side. The upper one in the picture displays char through about 1/2 of the thickness of the wood across the whole edge. Would have made it fine if I had put the material in a little straighter. 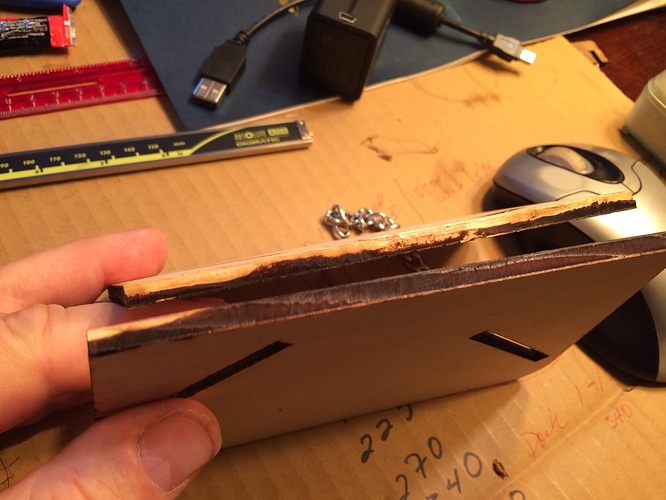 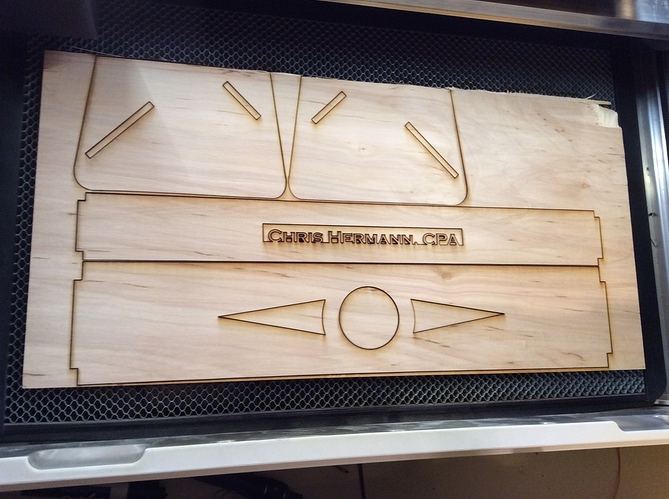 Here is another example of layout I how lay out with a fresh sheet of ProofGrade. 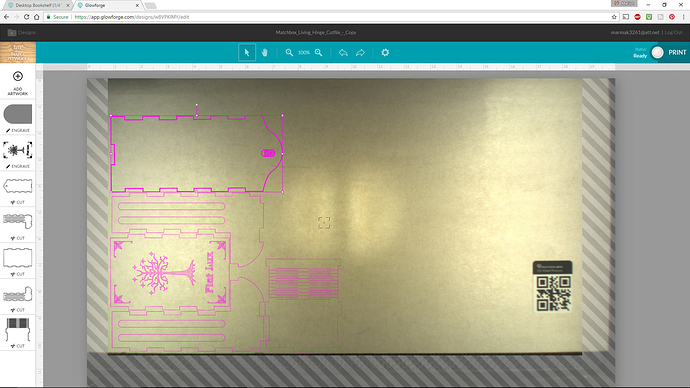 I’m pretty sure someone already linked to it before and I just can’t find it, but there was an online bot somewhere for reorganizing your SVG shapes to waste the least amount of material.

Posting back into this topic rather than starting a brand new one…I just found out about a website called SVGnest, which is a browser-based nesting software that configures the optimal placement for multiple cut files. Looks pretty interesting!! http://svgnest.com/