If you can take out the crumb tray a get the Amazon handle flat and between 1.5 and 2 inches high, you can engrave the design into the handle so it would all sit flush or alternatively use 1/16 Maple to cover the area and after having a bit of overlap, sand down the edges to flush.

I have been wanting to explore engraving for veneer inlays! But since I needed to get going on the gift and I hadn’t done any experimentation with it yet, I decided to go a different route with this project. And I’m glad I did because I learned some cool things, but I am also hoping to get an engraved veneer inlay project going in the next week or so. Have you done that kind of work before? And if so, anything I should be aware of going in?

There are craft brewers who make gluten free beer.

So true! I have found a handful of delightful gluten free beers over the years! The challenge is really that gluten-free beer tends to be quite expensive and a great many of them are…not so tasty (or are just not tasty enough that I would spend the money on them), so it can get rather spendy to unearth the treasures. But boy are they fun when you find them!

anything I should be aware of going in?

I have found that while cutting things out incurs a kerf, engraving has a negative kerf. So if you use the same vectors for both it will just about need a (leather/rubber) hammer to put them together. Getting the depth of the engrave to match is tricky and I am not sure if the glue will take up the extra, or if it is better to sand smooth afterwards. This was an experiment so It was not deep enough but I liked the precision and never sanded it flat… 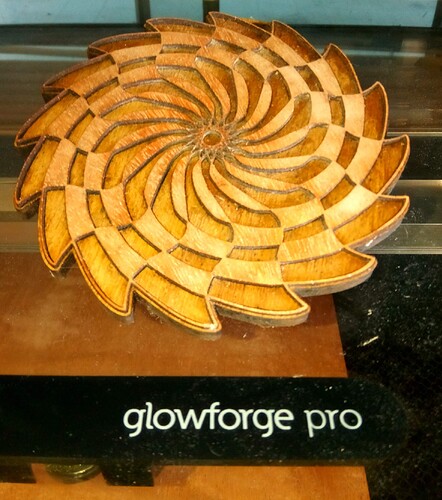 There is always Mead using honey instead of grains

It takes longer but I much prefer it and you can age it under pressure so it foams like beer, and add flavors, and it is gluten-free!

There is also Ginger Ale and Root Beer that need not have gluten and taste much better than the non-alcohol stuff at the store.

I love all of those things! I don’t think any of the meads I’ve had have been carbonated but that sounds tasty! In the city I went to college in there was a fantastic meadery which poured mead with carbonated hard cider and it was totally delightful. And the was before I was gluten free!

It would be great to learn to brew all the things you mentioned. If you happen to have any tried and tested recipes you’d recommend, I’d love it if you PM them my way! Thanks!

nice! i love when you can combine things (ie veneer and a larger blank). Could we see the back side too?

Thank you! I actually left the back side of the handle blank, so it was just the solid oak. Still beautiful, but less interesting. My dad’s setup (once it’s finished) won’t really allow the back to be visible but also I was running up against the deadline of the birthday so I was a bit short on time. Next project like this I’ll probably do front and back or maybe all sides!