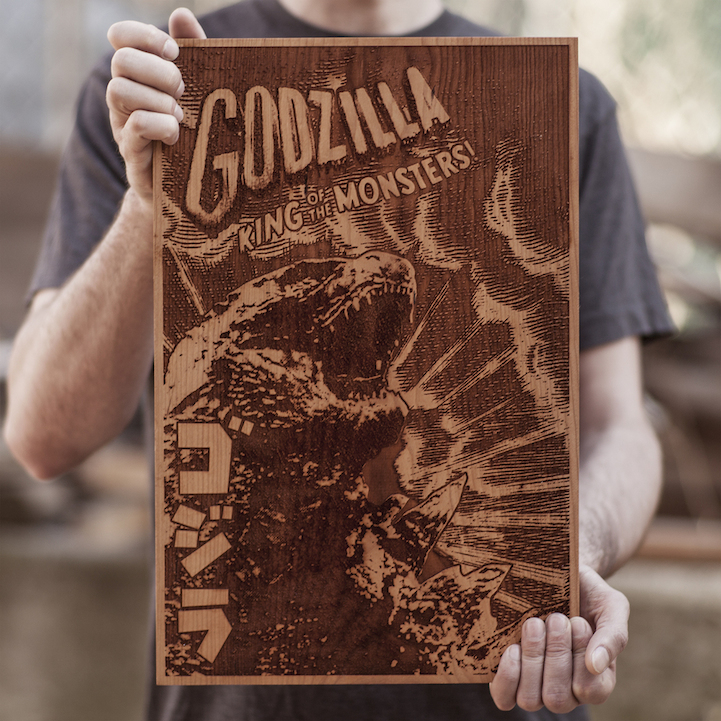 The unfortunate truth is that no matter how much you like a poster of a movie or television show, it probably won't last. Luckily, SpaceWolf ltd. has

Wow i was just thinking about something like this the other day.
Now that i see how cool they look I’m going to have to make some of these.

Oooh, really cool. Love the vintage travel poster idea too. Things etched in wood have a really great added gravitas to the design.

That is awesome. One of the main reasons I wanted a GF is to engrave photos onto wood as gifts…

Scarface and Good Fellas will make great ones, btw…

Holy sweet bejeezus that is cool!

Dune and Frankenstein just grab me. Great example of how a medium conveys different qualities.

Nice. This is one of the things I plan to do with mine.

Wow, so beautiful!! Thanks for sharing @newbies_234. I can’t wait to test this out with some of my own photographs. And I agree with you @johnwills, vintage travel posters would be amazing!

And just think… if they had a glowforge they could engrave at different depths and really make these pop. Silly inferior laser engravers

How can they sell these? Wouldn’t they be subject to copyright?

That’s a good question about copyright and commercial use here - even in small numbers. If we just look at the Frankenstein one, we’d all think that it’s ancient and all copyrights would have expired by now, but that’s not the case. The use of “Mary Shelley” in the graphic suggests that it’s trying to tie it to the 1816 book and not the popular movies, but the style of the monster itself is definitely from the movie and Universal still goes after unlicensed commercial usage. I think it would fail the test in a courtroom, but everything’s negotiable. The newer properties are even less defensible in court. Mass producing these is right out, but I’d print some of this kind of thing for personal use and not think twice about it. More info about this subject here: https://www.plagiarismtoday.com/2011/10/24/how-universal-re-copyrighted-frankensteins-monster/

Short answer: maybe.
First, Spacedog may have permission.
Second: Movie posters are printed, his works are carved from wood, so it is a different medium/media type. This can be part of a fair-use argument.

here is an interesting (and slightly depressing) video and article concerning Fan Art.

The only hard and fast rule is the lawyers make billable hours.

As regards @jbv’s different media type, I believe that is generally used for I own this image and I grant the rights to ACME poster company to make posters of it. I then grant the rights to make engraved wooden images to ACME plaques. ACME poster may sue me for selling rights they thought they had and my defense would be, no I only sold you the rights to printing on paper. A similar thing happened when digital came along. Publishers started distributing electronic copies of stuff written before anyone had thought of ebooks and authors said you don’t have that right - renegotiate. The publishers said we have rights to distribute, it’s not materially different than paper. The lawyers made billable hours. But I don’t believe anyone made the argument a third party could start distributing e-books of in-copyright material. When Google started scanning libraries full of books, they made a similar argument for books long out of print, but still under copyright, and didn’t exactly win.

If you plan on making a business model out of riding the edges of IP law you should factor in a large legal budget. Personally, I wouldn’t be surprised if they had licensed the images. Media companies usually have a department for approving licensing deals. I forget what I was looking for but I ran across a set of webpages for exactly this on the BBC website. For older works I imagine the price is fairly reasonable.

My point about different media types was not that it is legal just because it is a different media, only that it could be used in a fair-use argument… in court… with an attorney on the payroll… and that argument could easily lose.

I would hate anyone to read my comment and think that I was saying it is legal and permissible if you just change the medium. And even if you are not infringing on IP laws, you may still be infringing on TM laws, or on Copyright.

I am not a lawyer, and nothing that I type into this forum should be considered legal advice in any way, shape, or form.

I am an artist, though. And as such I am constantly pondering this issue. Should I spend time painting a scene from a movie that inspired me, even though it would be infringment? Should I make something for the “bill murray art” exhibit, even though I would have to use an image of him that I do not own as a starting point? If I want to make a poster expressing my disgust at a corporation or public figure, can I sign it and display it, or do I have to revert to graffiti tactics?

If you plan on making a business model out of riding the edges of IP law you should factor in a large legal budget.

Personally, I wouldn’t be surprised if they had licensed the images.

That could be the reason he only makes 50 limited-editions of any given poster.
Or it could be that he is making such a small number of these items that nobody is concerning themselves with it at the moment… but are actively watching what he does.

How is this posible?
Can the GF read .jpg or .png formats? I don’t remember this

If the specs are still correct… “Compatible with JPG, PNG, TIF, SVG, AI, DXF, PDF, and many more file formats”.

For my knowledge in other lasers, you can reach this effect sending a black and white image

Maybe I didn’t understand the intent of your question. Yes the GF is supposed to be able to accept the formats I listed. And yes the GF should be able to easily produce the wood images discussed. It should also have some ability to provide a variable depth engrave, though that has yet to be fully demonstrated. Don’t know what type of image format might be used to create the image engrave. Might be greyscale. We just don’t know yet. Waiting for capability demonstrations.

I’m sorry if i wasn’t very clear, i’m not an english native speaker. But you fully understood me!
Thanks!
The fact i wanted to share is that few days ago i learnt in my school’s lab, that the laser could read jpg file formats and you could reach results like this posters by engraving a jpg in black and white bits. They told me you first get your image on greyscale and then in black and white bits with photoshop.
Maybe GF works like that