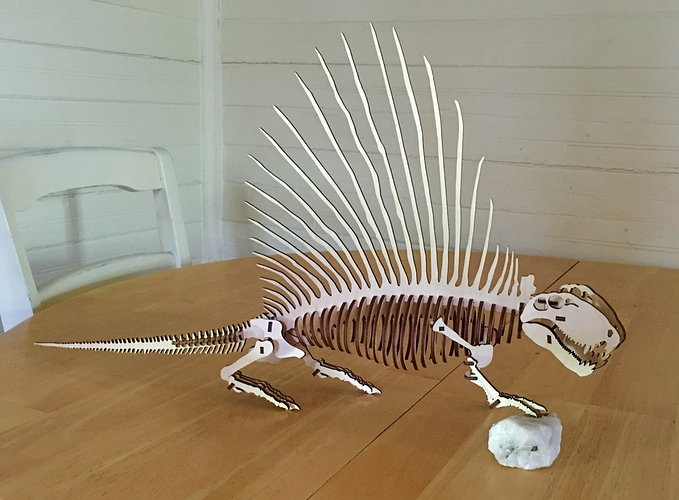 Things what I did:

Repacked all pieces to waste less material (one sheet, whaaat. Packing skillz, yo)

Things maybe to do:
Redesign skull. I think the way it’s done it a little lackluster.
Articulate tail perhaps. Might be nice with a bend or two.

Overall pretty pleased with it though. Definitely worth the 8ish bucks I paid for the model.

Spielberg snorts derisively at your title (while nodding with approval at the project).

I know lots of kids that would love your pet.

How do you like the product from makecnc? I’ve looked at buying a couple of things there.

They’re ok, overall. I bought them because dinosaurs but also to see what I could learn from their models in terms of design tricks. The layout is definitely not optimized to save materials, so I spend a bunch of time screwing with the layout to get it to fit in as few sheets as possible (because I’m stingy but also it requires fewer jobs to do the cuts, so I probably save a little time – fewer sheets to mask, fewer jobs to setup)

I had to do some very small tweaks to some paths because I’m particular. I didn’t like a couple of particularly sharp corners, but that was 100% optional. It would have been fine, but I would have known.

Like I said, worth the money if you want to save on design time. It would take me ages to design my own dimetrodon, and the license on the models you buy is fairly open so I have no qualms about modifying it. (e.g. fusing the spine elements into a single piece) The license is so open that I think I can sell finished products from the models, though I have no plans to do so.

So overall, thumbs up if you want a quick fun project.

Thanks, I’ll keep all of that in mind.

I’m still super newbie in Inkscape, so other than creating some basic things and selecting object to path, I don’t know how to “look at the path” to see if it looks good or needs tweaking.

Have you found a particular set of tutorials helpful with that type of thing specifically? I know…there are tutorials for everything out there, but I’m a bit overwhelmed with the limited time I have to actually use the Glowforge, and the vastness in capability of both that machine and Inkscape. I’m learning tidbits as I go, but I want to get these ideas out of my brain and into a finished project! Ha

Well in this case, I literally “looked at the path”. I saw a shape that looked like it had a harsh corner, and smoothed it out using the node tool. Sometimes In node mode I will also look at all the nodes and see if any look weird (the “dot” (square or diamond shaped) can tell you if you have a break in the path or modes stacked on top of each other… sometimes I’ll heal those by merging the nodes in question but not this time.

I literally disagreed with a few sharp corners and thought they should be rounded.

If you want to know more, you can google “inkscape node tool”… it’ll tell you a ton about how to manipulate nodes for fun and profit

Thanks for the follow up! I thought “looking at the path” was some type of Inkscape euphemism or Jedi trick I had just not learned yet. ha ha