I think cost of the materials you cut will dwarf the cost of cutting them.

oh yeah… My wife asked “how can a small piece of weird orange wood cost so much?”

I was actually surprised that my electricity usage did not increase. The last three months I’ve used 850, 691, 722, 737 kwh. Only the last was a full month with the Glowforge. The surprising thing was that the unit is on 18 hours a day, 7 days a week, and all the lights in the studio basement are on with it. Though I probably only average an hour cumulative each day of actual burn time.

I was actually surprised that my electricity usage did not increase. The last three months I’ve used 850, 691, 722, 737 kwh. Only the last was a full month with the Glowforge. The surprising thing was that the unit is on 18 hours a day, 7 days a week, and all the lights in the studio basement are on with it. Though I probably only average an hour cumulative each day of actual burn time.

The good news for us is during the summer, our solar array kicks out about 7.5kw giving us around 50kwh/day on average and during the winter around 15-25kwh depending on snow/length of day. So hopefully that will cover it…

all the lights in the studio basement are on with it

I switched mine out with LEDs 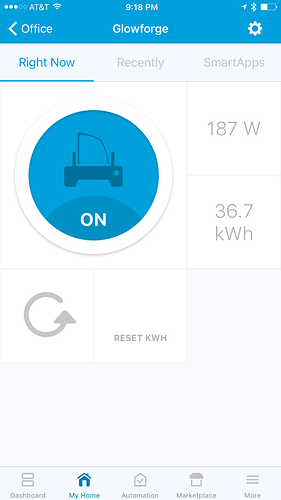 Since Jan 9th of this year. The Glowforge has used 36.7kWh.
(At the time of the screenshot the unit was/is in use)

What’s your idle power draw? It’s constantly running the fans… I assume that’s to keep something cool which means that heat must be being generated, i.e. power is being dissipated…

Forgot to check the draw with the laser on, though.

As it happens I was just looking over @aeva’s shoulder this afternoon while she was measuring power draw. It was about 40 watts standby, 300 watts when engraving, 400 watts when printing if memory serves.

It was about 40 watts standby

I have to say it’s pretty loud at idle and didn’t know if you guys could put a more “standby’ish” mode which powers it way down except network access? Would be a nice feature if you could put in that mode so it’s quiet and draws only a few watts.

34W at idle. Pretty sure the majority of that are from the lid LEDs and the pump. Standby mode (the lid LEDs timing out due to inactivity) was something I requested eons ago and was told that something was in the works. As for powering the fan and the pump down, that would prolong the restart (from idle) time most likely. Honestly, I’d be happy with the ability for the lid LED to power off after sitting idle.

Wow, a comment from the man himself!
Thanks for taking the time to share info. I know you guys must be working your bums off right now.
Can’t wait to get that GF!

We can’t wait to get it to you!

Idle suggestions are great - definitely in the hopper, but haven’t risen to the top yet.

Dan, do you guys have a target for idle power/switch to standby, or better to turn the GF off at then end of the day? 40W seems a bit high if keeping it turned on 24/7.

If we make any changes, we probably won’t announce them until they’re done.

Standby power for appliances has to be less than 2W in the EU but I don’t know if it would apply to a laser cutter as there isn’t much reason to leave it switched on 24/7.

So many devices have a standby LED, I read somewhere that estimated cumulative power consumption in the US, and it surprised me. I started counting how many in the house…
That voltage bleed stacks!

I was hyper-aware of this when I lived off-grid. Everything had to go onto a power strip, so as to avoid the accumulated standby power draw. I have gotten lazy since moving back to grid power.

This might be an issue as currant (electricity) is + .54 cents an kilowatt hour. We have some of the highest costs per US territory.

Yep. Was wondering why the workshop bill was $45 last month (separate meter from main house)…it’s what happens when you crank 2 1.5 kW heaters to bring the room up to operating temp for a couple of days…