Yes, you can cut (PCB Board) metal directly with your Glowforge

Adjusting my settings for home brew pcb boards today. 300/Full power nearly went through the FR4 board. Readjusted to 300/30 2 passes, and got useable results.
Exported from Eagle with LaserCam CAM file to EPS, manipulated in Inkscape to get the trace outlines, FR4 board coated with Rustoleum Matt black spray paint. Buffed with 00 Scotchbrite before etching. 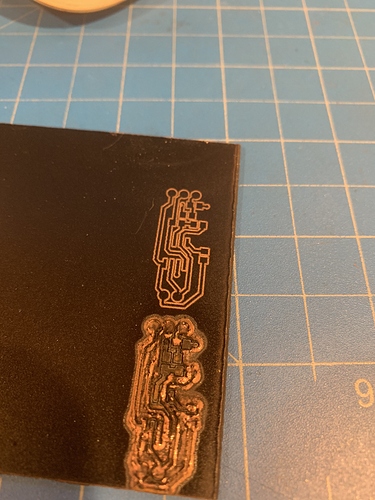 A reminder for anyone using copper in the GF: Copper is highly IR reflective and can reflect the laser beam straight back into the lens, damaging it.

I’m going to move this to Beyond the Manual since that’s the only place where non-PG settings can be posted.

Yes, copper is reflective. Many people do it, and so far I have not seen an instance where it has damaged anything. I would imagine if it were an open laser, there would be a lot of laser shrapnel.
There was a thread earlier where it was discussed, and for a variety of reasons, it did not raise any real concerns.

I’d also just want to comment the title is misleading–PCBs are not metal, and any Cu or Au (gold) traces in them are such a thin plating, it makes sense it hardly affects the ability of the laser to get through it (as well as very different class of metal vs. ferrous)–but as noted by others, reflectivity concerns back to the lens, as well as concern what could be off gassing from the layers in the PCB (basically resins with fiberglass or other similar mesh to stiffen them–so hope you have really good ventilation!).

As well as you only show etching through the paint to expose the traces & layers of the PCB & not cutting??

The photo shows 2 attempts. The successful one, where the photo resist is successfully ablated. The other attempt was a failure in that the copper layer was in some places vaporized, and the cut went 1/2 way through the FR4 board.
The layer of copper applied to the FR4 is a layer of metal, and was cut.
Of course I’m not suggesting this as a method of cutting copper for any finished good, the copper was cut. Cutting FR4 would certainly not be a great idea either, it won’t go though without a lot of work, flames, and fumes.

If one is looking to cut thin metals, you can do the acid resist method.

Acid cutting sheet metal Everything Else

I’ve been thinking about cutting metals recently, stainless, aluminum etc. It’s long been established that it’s not possible to cut metal with a 45w laser cutter, but I’m not one to turn down a challenge!

I’ve etched PCBs in the past and, while it’s not possible to etch the copper surface with a laser cutter, it’s possible to use a laser to selectively remove a resist coating and then etch the exposed metal away with an acid. It got me to thinking, would the same be possible …

Removing acid resist on copper has been discussed in threads before. GF staff have chimed in with interest vs concerns.

Can GlowForge be used to etch PCBs? Beyond the Manual

We’ve done a bit of research but no applied tests - it’s unlikely Glowforge will do well for this. You can cut or etch masks and do a resist method, but your best bet is a different device. We’re big fans of the team at Othermill; they specialize in that. We definitely don’t want you to get a Glowforge if it’s not going to work for you.

When they named FR4 for “Flame Resistant” they weren’t accounting for focused laser fire.

Building a personal project with a one layer PCB. Learned out to do the acid etching part, drilled holes, stuffed it and the board is alive!

Are PCBs cutting laser safe? I always thought they were not because of resin that binds it. I guess I thought it had PVC. Now that I research that isn’t the case

We want to avoid drilling holes. Can the cutter laser the holes?

“Cutting” FR4 in the laser is really more of a “Sever” operation. Enough heat and passes and it will go through. There will be plenty of fire, smoke and noxious fumes. The end result is a charred board.

So I am only using this to remove the acid resist, and hand drilling the board. There are some who have had luck doing two sided boards. I’m not going to try.

I find the laser has a lot of Kerf as it engraves the acid resist away. Fine details are lost even if I do it as an engrave. Its hard to make the vias and pads big enough so they aren’t lost when etching the board.

Thank you. I did alot of google research and not one user cut their blanks too and now I know why.

One day I will invest in a CNC

If you’re making pcbs on the regular, I’d highly recommend it. Get a small, high precision model and you’ll be quite pleased. Most are about the same price as a glowforge.