Yet another "have you used this filter" thread

I have seen a few threads on this filter…

I have seen one other thread mention this filter, but it was from a while ago. Has anyone tried this filter directly attached to the Glowforge, it looks like it should do the trick and the filters are (relatively) well priced. I thought if anyone has used it, you probably had to DIY a step-down collar from the 10-inch intake to the Glowforge sized exhaust. If it works I could design a 3-d printed step down collar which I would be Happy to share or even print for those wanting one

I have the filter but after many attempts, have dropped the 3dprint design for the box idea that could be made on the Glowforge. I designed a side loading spiral design that would push big bits away before getting to the filter that could have been done on the 3d printer but at least a 12 inch bed and with the supports probably over a kilo in total weight.

Going with the normal step downs as available ends up sticking out about twice the thickness of the machine itself. This design is ~5-inches thick and puts the 4" hose coming in from the side. 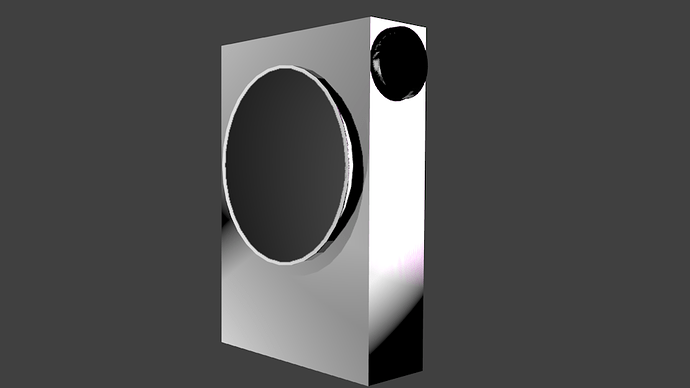 Does it filter the smoke well?

Cleans a room in a few minutes even when the exhaust fan was not working and smoke was coming out of everywhere. I was running the Glowforge when I would not have been able to do so otherwise and it was just open to the room then.

i can run in a closed room

I have been running in a closed room and keeping that room clean. Obviously the turnover meant that the smoke would get ahead in the room at its worst but the high turnover of the air in the entire room kept the worst down and would clean all the room very quickly. Meanwhile the some was not able to move to other rooms. The AC uptake was in that room so that made it easier as well and it has charcoal Hepa and washable filter as well. I did send the exhaust of the blue in the direction of that intake so to limit its load,

if you are feeding the exhaust directly to the blue it would do a lot better. I had a fallback plan to just stick the 200 CFM exhaust hanging out in front of the 500 CFM intake and expect it to make the difference. As it is whatever leakage there might be from the exhaust to the blue would be as with the Glowforge be pulled in rather than blown out.

I have not put together a direct line, but in part because what was happening was sufficient, but it would almost be overkill if I did.

Thanks for the details here and on the other thread.

What washable pre-filter are you using?

I just found two types at the grocery store made for room air conditioners I suppose One is like grey sponge very light weight and not even a half inch thick and more flimsy than a kitchen sponge. You would not expect it would stop much at all, but when you wash of out tons come pouring out. It is also easy to wash in the sink. The other is a dark green and almost like a bunch of small sticks than a sponge, very stiff and almost an inch thick, you will want to run a hard sprayer to clean it up, but it will both stop more and hold more so I have that on the inside and the gray on the outside. And will clean the gray twice as often but it is also easier to do that. I have had both quite a while so could not know price or brand but I do recall buying them at the grocers.

BTW: I have been in touch with the brand manager of the A600 Pullman. They do have a carbon filter.

The design of that filter both moves more air at minimum (300 CFM) and should be considerably quieter than the BlueDri AS-550. I also like that the company purposefully set out to design a quiet Air Scrubber as opposed to recycling various generic components as most others do.

I’m still on the fence. Still painstakingly researching as I’m want to do. :). I’ll likely get the A600 and, when I do, I’ll make a new post with a review.

Makes a big difference if the filter is many times the cost like $300 vs $30 for a filter.

Not sure how much the carbon filter is.

I had not seen the picture of the thing before till just now and that opening directly to the full size of the filter could indeed be quieter and have a larger volume of air but as soon as you hooked it to the Glowforge I think both advantages would be lost and at more than $100 extra cost not such a good deal.