Tried out the 3D engrave on a small piece of acrylic. This was a test run for a larger version of the same picture to be made into an LED light. Pretty happy with it and can’t wait to run the larger one closer to Christmas.

The shading in the torso looks really fabulous - I know it’s a function of the light getting less the further up it goes, but still!

BTW, if you’re going to do a large design there are posts on here talking about graduating the engrave so the light can get further up the design, those might be worth you looking into

I’ll look into that, thank you! I had a issue with that on my last LED light 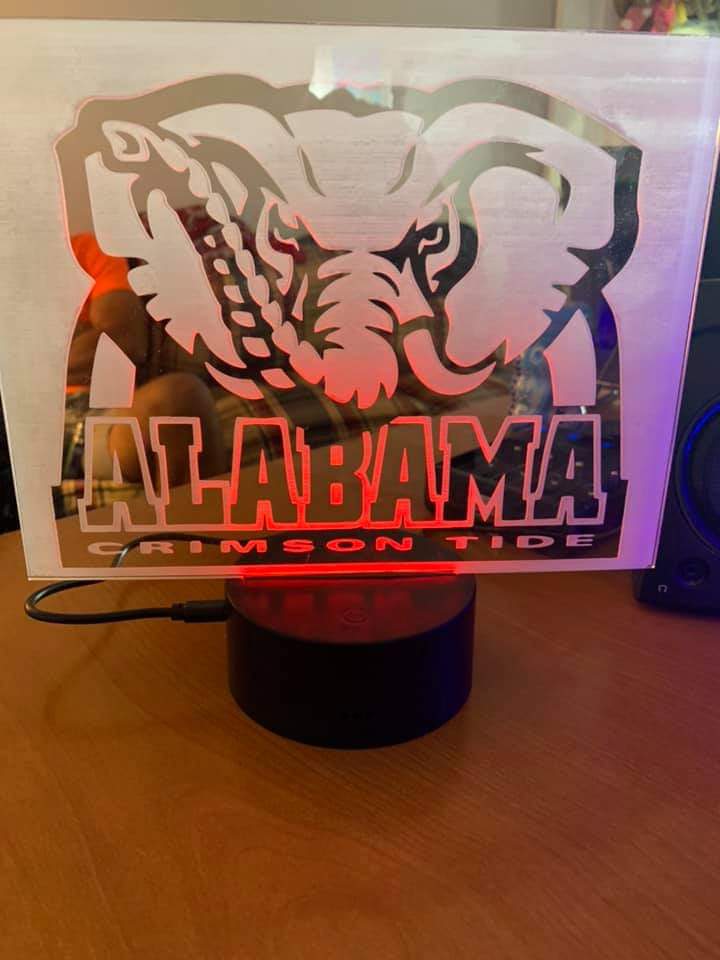 Sadly I can’t find the post that talks about it from a certainty point of view - only a bunch of posts saying “I’m gonna do this as recommended here”
Sigh
If I find it I’ll post it here (if you find it, post it here!)

I didn’t exactly find it, I posted it. All of my engravings were done as a gradient.

Edge lit word clock Made on a Glowforge

What time is it? [IMG_1675] (Walnut, cast acrylic) It’s clock time, of course. Quick notes: Overall base dimensions, about 14" wide, 3" deep and 1" tall. Base sanded to 600 grit and finished with wipe on satin polyurethane. Letters about 0.35" wide. Overall height of the acrylic is 5.6". Addressable WS2812B RGB LEDs (60/m) driven by an Arduino nano clone with a DS3231 clock unit. So I wanted the text to be center stage so I intentionally went simple on the base. To that end, I wante…

So how would one do a gradient? Is that something that can be done in photoshop or is it a setting?

I did it with a fill gradient in Inkscape, then exported as a png, then re-imported the png and replaced the vector text.

There are lots of ways to do gradients, photoshop/gimp can do it too. Just google “make a gradient fill in (program)”.

Thanks! Last question, light to dark or dark to light? (Btw thanks for replying, I love your work)

Depends on where your light is. You want it to be shallower closer to the light, the theory is that the engrave casts a shadow on subsequent engraved areas. Think of it like a concert, you want the short people in front, so everyone can see the light show.

While I’m not 100% sold that using a gradient makes much of an impact on practice, the theory is good so I went with it. I think it may have more to do with total engraved area, siphoning off light and preventing internal reflections, but I haven’t tried to test it empirically.

I went from about 50% grey to 100% black in my gradient, I wanted to ensure it was all fairly strongly engraved.

And thanks, but I’m actually a bit of a dabbler when it comes to acrylic. Someone else could come along with a lot more info to share. You should listen to them instead

As noted you wand the lowest closer to the light, I have done this for other reasons that I make two (extra) layers in Gimp with my finer grayscale on top and the gradient on the bottom. I can thus adjust the transparency of the upper layer generically till I get the effect I am after. The I create a new layer from visible and turn off the other layers, I then make my final image from that.