So I have a dilemma that hopefully someone can help me with. I purchased a 3d illusion file from Etsy to engrave. I entered the settings that were included with it. The wood I am using is maple bond plywood 1/4” thick. The results of the file are different from the actual photo of what it’s supposed to look like. I messaged the seller and asked him why. He then asked me if I had done any prep to the wood. On my end I wasn’t aware that was necessary plus it didn’t say it on the listing. Does anyone have any ideas how to achieve the results that are in the listing? This is the listing photo. 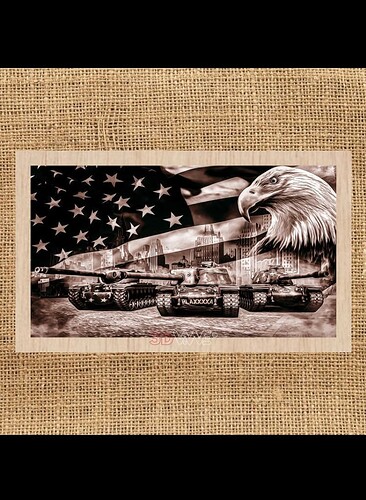 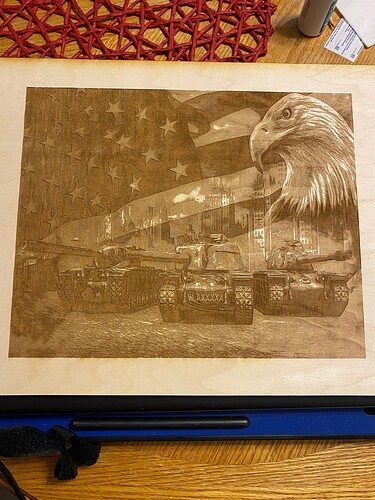 This is mine after engraving

Any help would be appreciated!!

It is impossible to create that level of contrast on wood alone. The image used is faked.

impossible to create that level of contrast on wood alone

So, for the most part he’s right.

There is some promising work done with using a borax solution to darken wood engraves:

There’s also a lot of variability in terms of how dark an engrave will end up depending on your material. Maple engraves pretty light compared to mahogany, for example. You might want to see what other woods are out there that could get you better results.

And lastly, you’re using a plywood. The problem with that can be that when you engrave past the top layer you will get different colors on the subsequent layers. You have to ensure you’re not engraving too deeply.

I believe you are engraving through that top layer and you’re seeing color banding in the lower levels of the wood: 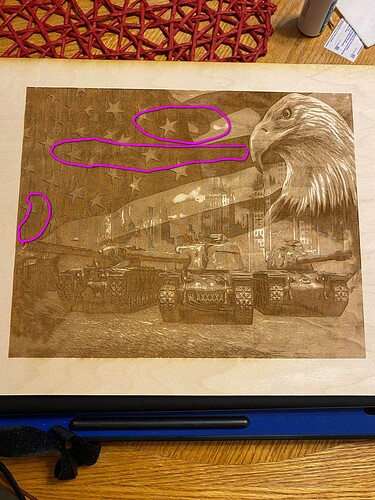 So, when they say “preparing the surface” they may mean borax or another darkening agent. I agree that it’s likely photoshopped to have darker contrast in their product image,[1] but it may be possible to get closer.

The laser cannot turn wood white though, and their photo has white in the lightest sections that would only work if the wood was painted white first…

That image is easily obtainable on the web, it took me seconds to track it down. It’s just been stolen and then edited to be sold.

That’s what Etsy does. Provide a “store front” for people selling stolen content.

So then pretty much all the ones that are out there would be fake as in getting that high of a quality. I know that getting that type of quality is impossible but what steps in prepping the wood could help the overall results?

I messaged the seller and asked him why. He then asked me if I had done any prep to the wood.

I would ask the seller what “prep” they recommend to achieve the results provided? (Other than photoshop)

I have a handful of engraved items but none are anywhere near the contrast in that fake pic. Some were painted first, some are on the B&W board you can get at THD and similar. That worked for the designs I used but wouldn’t for this image because it’s not pure B&W. Convert to dots wouldn’t work because the surface coating breaks apart.

Not all stores on Etsy are crooks. My store is certainly not a store front as you described. There are thousands of people just wanting to share what they make. There are most certainly more good, honest stores on Etsy than the rip-off/knock-off stores.

There are many legit Etsy stores that sell amazing files. This one might not be in that group.

I suggest you look at this one: 805LaserSpot - Etsy

I have purchased from him. Awesome files. The one I bought this file from was 3D Wave Digital.

That 805 LaserSpot guy…I sent him a message (thru Etsy) awhile back because I saw alot of his stuff on another Store (Like what was said earlier…, SOME Etsy Stores DO rip off others designs and resell them). He told me that he has been given permission from the actual artist himself, that makes those pictures. He is a friend of the artist. 805 LaserSpot is the “official” store that sells the files. A few weeks later, that phony store was not even listed anymore.
I am not naive. I realize he could be blowing smoke, but I really don’t believe he is.
His stuff is awesome. I have purchased many and have even sold a few finished products (which he gives permission to do. Selling a finished product is OK, reselling the file is not.)

Yea I have bought files from him before. He’s great to deal with.

Honestly, since you’ve bought the file - I’d be very curious what it looked like if you lightly sprayed the wood with white spraypaint - and then try the engrave…it might get you closer

I was thinking about that. Someone else had mentioned that also. I really liked the photo and was making it for a veteran who stops by the coffee shop down the street from me. Just thought it would be nice to show my appreciation for his service.

By that you mean changing the width of it? Yes I wanted it wider.

Just an off-topic aside, I wish footnotes worked in Chrome on Android. They pop up very briefly then reload the whole page.

Yes I wanted it wider

It looks like your version is almost square but the original is clearly a wider rectangle.