Some friends of ours asked if I could make an edge-lit plaque for this weekends Mothers Weekend event at WSU. There will be an auction during the weekend and they wanted to donate something interesting. They were a bit time constrained but I figured that if they got the materials and the designs, I’d give it a go. They wound up getting a nice light base and some 1/4" non-proofgrade acrylic for the project. I haven’t tried doing any 1/4" yet but figured that using the proofgrade settings would be a good starting point. I cut down the material they got so it would fit in the forge, added masking to it and sent the print the forgey. Everything was looking pretty good but when we pulled it out, there were some issues. (This is the point where I should know better than doing an hour and a half print without testing things or knowing what I’m doing.). There were some points where the masking had bubbled up and it looked as though the acrylic had sort of melted around that spot, really didn’t look great. The other thing was a bunch of little “blips” all around the edge where the cut occurred. They were pretty evenly spaced and little line/swirls like the laser had “blipped” off the cut and did a shallow engrave or something. Neat pattern but totally not what I wanted.

Later that night, I tried number 2 print without the masking. I didn’t get any bubbles in the material but still got those weird blips on the cut edge. The other problem (self induced mind you) was the atomized material from the engrave created a fog on the acrylic. I cleaned it with soap and water in the sink and a soft rag but that didn’t get rid of it. Tried hot water and soap, still no go. Tried with the dish scrubber (oversized toothbrush thing) and that didn’t help but it did do a good job of scratching it. sigh. (See previous note about my lack of patience and understanding the right ways of doing things). Needless to say, I figured this print was toast so tried a bunch of other things to no avail. I went to throw it into the scrap pile and noticed the bottle of Isopropyl alcohol sitting on the bench. I figured I’d give that a try and lo-and-behold, it took it right off. sigh. Why didn’t I start with that? (see previous notes).

So yesterday was my last opportunity to get this right as our friends were leaving today to go over to WSU. I swung by TAP Plastics on the way home to pick up a couple of sheets and then got to work with the forge. This time, I played it smart and did a LOT of small 1x1" test engraves with a bunch of different settings, a bunch of different cuts (trying to get rid of those weird edge cut blips). I finally found the engrave setting that looked really good. I also figured out what those little blips around the cut were as well. While cutting the little 1x1 squares, I would see an occasional “lightning” flash light up the acrylic. After pulling the square, I would see the blip in the same area of where the “lightning” strike occurred. It dawned on me that the laser cut through the material and hit the honeycomb behind it and heated up the honeycomb to the point that it melted a small squigley “blip” into the material. Hadn’t seen that before.

So I figured out my settings and dialed them into the machine. For this “final” piece, I now knew I wanted something thin, yet thicker than masking, under the acrylic for the cut. I wound up using a flatted soda cardboard box cut down to the size of the bed. Put in the acrylic and hit print. With the adjusted settings with more LPI, the print time went up to 3.5 hours. It was already 6pm so I knew this was going to be my one and only chance. When Forgey was done, I pulled it out and checked the edges and no blips! Beautiful clean cuts. I lightly scrubbed the engrave with a soft brush and then started working on cleaning up the “fog” with the isopropyl alcohol. I got it about 95% cleaned up when our friend came over to pick up the piece. I let her know how she could clean up the rest of it. Shouldn’t take her too long. While talking a bit with her, I printed a “WSU Mothers Weekend” acrylic picture frame insert (didn’t get a pic of that) and a smaller edge lit acrylic for her son.

It was a fun, if not slightly frustrating project. I only have myself to blame for that though. I learned a bunch but of course fell into my normal pattern of doing things wrong multiple times before stopping and testing things first. I don’t mind failing, just not multiple times on such a large piece. I keep telling myself to slow down and test things first. One of these days I might just listen!

Here’s the completed 10.25x15" sign that will be at the auction. Still needs a bit of cleanup but they’ll get to it before the auction starts. 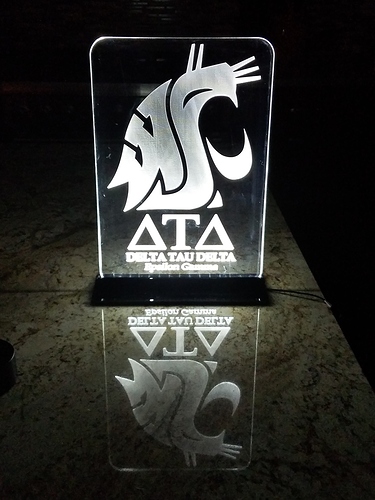 Here is the smaller one for her son. 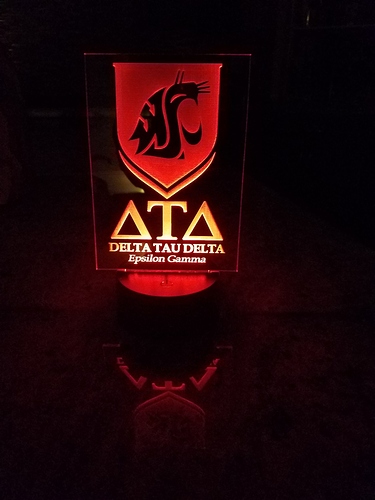 One of the things we’ve all fallen prey to - “I want to see it now!” or “I just changed one thing, it’ll be fine.”

It is a good reason to invest in some draftboard (or other mdf) and chipboard (non-corrugated cardboard).

Nice! It will be a big hit at the auction!

They both look great!

I’m glad you got it worked out–looks like it was worth it! Your friend should be very pleased.

Where do you get them from. I would love to do something like these for my nieces and nephews once I get my gf

The light up bases both came from Amazon. The smaller bases were around $14 and are multi-colored with a remote. The larger base was significantly more and is only 1 color but will light up a significantly larger piece of acrylic.

How did you get such even lighting?

I would see an occasional “lightning” flash light up the acrylic. After pulling the square, I would see the blip in the same area of where the “lightning” strike occurred. It dawned on me that the laser cut through the material and hit the honeycomb behind it and heated up the honeycomb to the point that it melted a small squigley “blip” into the material. Hadn’t seen that before.

Congrats for the detective work and discovering flashback. there are many older topics that discuss this and how to mitigate it. You did well figuring it out and seeing that it is extra flash from the honeycomb. Folks sometimes put paper under acrylic or tape the honeycomb. Of course, getting the laser power just right to cut through the bottom masking and not reflect off the honeycomb is the best solution, but not always possible.

I have found that getting a power profile correct on engraving acrylic is a trade off. I try to go deep enough to flash off all the masking and not leave any of the adhesive on the surface. It took me a while to understand that it makes weeding the masking easier and doesn’t leave as much residue.

Really nice work. I’ve been doing a batch of 18 edge lit acrylic signs this week. It’s much simpler to buy the base, but I made them all with the Glowforge and my 3D printer, some glue and some solder for the LEDs and some USB cables. The longest operation was actually weeding the 5x8 acrylic signs with a lot of lettering on them. Yikes. That took forever. Will post as soon as I finish them up this evening.

@HalWebGuy, by messing up the first two! I took about 2 hours before I cut the final big one doing a lot of different settings with defocusing, power, speed etc trying to get a smoother engrave on the acrylic. The original one was ok but you could really see the lines in the engrave. I really liked 450 LPI, Speed 500, Power 85 and Focus height 450 (1 pass) but with the size of the piece, the GF said no. I reduced the LPI down to 340 as that pattern on the engrave also looked really good.

The smaller red lit one was just done using the proofgrade 1/8" acrylic settings. I would have bumped up the LPI on that one too but we didn’t have time to wait for that one.

@marmak3261, I’ve since found some of those old threads talking about that issue. I recall having read them long before my forge arrived but didn’t remember them when I saw this issue cropping up. I tend to remember things better when they go wrong and I have to figure them out on my own. Learn better by experience, no matter how many times I’m told the same thing!

I tried a number of different power profiles with the 1/4" acrylic to see what the minimum I could use to cut through without getting the flashback but it wound up being pretty much what the proofgrade 1/4" was. I knew the masking alone wouldn’t be sufficient since my first masked piece still had it. Took a while of scrounging around to find something just the right thickness to help protect the acrylic. Of course it came out of the recycle bin! From now on all of the old soda cartons get cut open and pressed flat and stored for the future!

Looking forward to seeing the signs you’ve been working on! I’ve really had a lot of fun making them and like to see what other people are doing with them.

Just heard from our friends in regards to the auction. The big piece was last on the block and made the most money, bringing in $750! Not bad at all!