Has anyone worked out good settings for vector engraving edge lit acrylic panels (e.g. for simple line art or text)?

Are there any established “best practices” for edge lit acrylic (in general) so far?

Because of the way motion control is handled in the Glowforge, there tends to be significant depth variability during vector engraves (scores). Going around corners seems particularly prone to creating spikes. This all makes the engrave look kind of rough. I’ve had some luck reducing this by using lower power at slower speeds and, by disconnecting corners in the designs.

I searched the forums but, didn’t really find anything relevant. I suspect I am probably just not finding it with search. I saw that some people were converting vector engrave to raster for edge lit applications. I hate to give up speed and simplicity if I don’t have to.

I’ve pretty much used PG settings for mine. I’m on my phone right now and need a bigger screen for searching, but there was some discussion of defocusing the beam to smooth the engrave, and what lpi is optimal; alternatively you can flood the engrave with solvent to smooth it and add some transparency.

I’ve got to go wrestle a 2yo into take by a nap (babysitting the grands today) but if nobody’s turned up links for you by then I’ll pull out my laptop and see what I can find.

Okay, here are some threads I dug up – not sure they answer your specific question, but at least they might head you in the right direction!

More trial, errors, and fun Made on a Glowforge

I’ve been following along the curve that is learning…and having a ball. I graduated myself from using wood only, to acrylic…which I love. For some reason, I’m still hung up on trying embossing powder on everything…so of course it went without saying that acrylic would be the next victim. I also sent this to support with a couple other little things, just in case they care.

•••••• I made a little test square with various types of images on it. The little artifact ‘outcroppings’ are so…

Yesterday I created my first edge-lit acrylic sign, for my husband’s band. I am generally happy with the results, but have learned a couple of things for next time and thought I’d share. First, the sign is too large for the light to cover the entire image in the way I had hoped. I’ll scale back the next sign a little. Second, while the idea to do a deep engrave on the shrimp (or, krill, if you will) was a good one, BUT it looks way better when viewed from the back. I will reverse the image and h…

I’ve wanted to mess around with edge lit acrylics and finally got the chance recently. I ordered this on amazon, just to have something to start with before building my own. The base is slightly wider then medium proofgrade acrylic. I just used some gorilla tape on either side to even it out. I wanted to see how the brightness translated across the part. I was worried that the far ends might not be as bright, or that a closer feature could block light from a farther feature. So, I made a te…

Because it had to be done. (See this thread) [IMG_0679] [The%20World%20Always%20Seems%20Brighter] Update: Here’s a base to fit it that will hold a USB-powered LED chip (specifics in the linked post).

Settings for engraving fine lines in acrylic Beyond the Manual

Hey folks, these are the settings I used to engrave fine lines in Proofgrade medium acrylic: 675 lpi, speed 500, power 100. Used recently on this project:

A couple more edge-lit designs, for WSU's Mothers Weekend charity auction Made on a Glowforge

Some friends of ours asked if I could make an edge-lit plaque for this weekends Mothers Weekend event at WSU. There will be an auction during the weekend and they wanted to donate something interesting. They were a bit time constrained but I figured that if they got the materials and the designs, I’d give it a go. They wound up getting a nice light base and some 1/4" non-proofgrade acrylic for the project. I haven’t tried doing any 1/4" yet but figured that using the proofgrade settings would be…

Thank you! I’ll have a look.

Sorry to read about your wounded `forge. Hope you get back up and running soon.

Sorry to read about your wounded `forge.

Thanks! They said I should still be able to get reliable results if I keep things on the left side, so I think I’ll be able to avoid withdrawals until I get my replacement.

What @josephtpage said . I use PG setting and defocus. Help a lot.

Defocussing helps get rid of striations during an engrave. It may help with your issue, but I’m not 100% sure. Also, because it’s defocused, you’ll have a wider kerf, which means wider lines.

Another thing you could try is lowering your speed. If the speed is lower, it shouldn’t need to decelerate as much at corners. You may have to lower your power to compensate, as well.

Hmm, but this does bring up an excellent question I hadn’t thought of. What speed setting do you need to not have the head decelerate around corners?

I use .210" chemcast for my edge lit signs. I always reverse the engrave and go from the back. I am most satisfied with 700 pews and 80 zooms with a 340lpi. It takes longer but it is a good balance for smaller text and thicker graphics and lines. If there is a large area of engraving I go ahead and defocus sometimes, but in general I don’t have that much of a visible engraving line. I’m happy with that.

I am almost always engraving filled vectors, but sometimes there are bitmap graphics.

Here is the result but I didn’t post settings here.

Prusa 3D printer and Glowforge laser working together: Edge Lit Acrylic Made on a Glowforge

[3A95DD6F-37DE-46B5-890D-17156215DB57] Le Chat Noir I traced from an image and tweaked by hand the vectors. It’s a hugely complicated 3color original so requires some interesting work to recreate the feel of the original with just the white. No pupils on this image gives it an eyeglasses look. [1B15E2E4-971F-410A-BF98-DA194616FA58] The White tree is wiki commons. I’m still trying to remember the location. Grabbed it way back when I was first doing my matchbox design and needed to do some w…

I’ve been reverse engraving and running full/1000/340 for engraves (triangle patches and text below) and doing scores at full/500. (I removed a name that was between the patches). 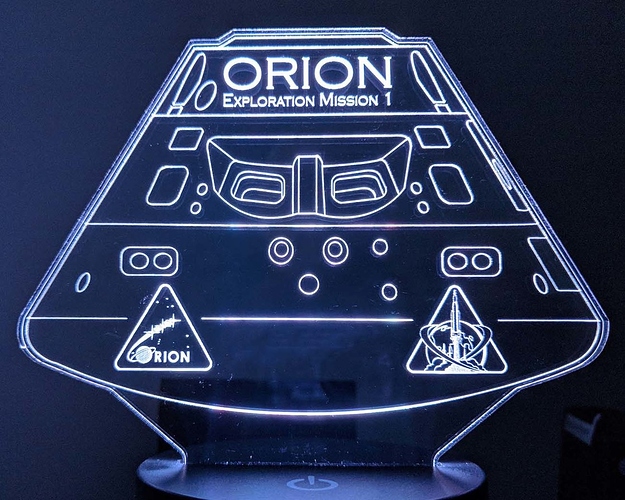 This is 3/16 material from Inventables

I would recommend taking a look at the HQ score settings.

By the way. I am using a thicker, .220" acrylic, just a hair thinner than Proofgrade thick. That’s why I like a deeper engrave. If I do the medium acrylic from Glowforge, I do a little faster and more power for not as deep an engrave.

I ran some additional tests in different ranges suggested here. There are lots of little 1.5" test squares everywhere.

The settings that seem to be about optimal for 0.24" thick clear acrylic and Lightguide acrylic (no masking) are 115/50 defocused to 0.5".

This gets an engrave depth of around 0.08" (~2mm). That’s a little shallower than I was aiming for originally but, it actually seems to work better. There is still a minuscule amount of spiking at some points but, you really have to look for it to see it. So, I am calling it good.

Edit: I am reversing the designs and engraving on the back. The main difference from what I was doing before was the defocusing.

what does it mean to defocus and how do you do it in the GFUI?

Change the focal point setting (you’ll need to be using Manual Engrave for the operation). You want it to focus above the acrylic to smooth the engrave. So if the material is 0.125" you put something like 0.250" in the focal length field. The beam will be wider when it hits the material and burn a thicker line with each pass.

Quick update if you are trying this: I switched to masking the engraved side. I found I could get most of the residue off with toothpaste and a lot of rubbing but, just masking it was easier. I also learned about the joys of crazing and annealing by trying to use isopropanol to remove residue.

what do you use to mask the acrylic?