So, I’ve got a few questions here that I’m hoping to have answered before I travel too far down a path.

I’ve heard a few people talk about using ‘score’ instead of ‘engrave’ as its a much quicker operation. I’m assuming that means that you’d use ‘engrave’ when you want variable power depending on the greyscale levels of the image. But if you’re looking for multiple different, yet consistent ‘engrave’ depths you could choose to use ‘score’ instead. 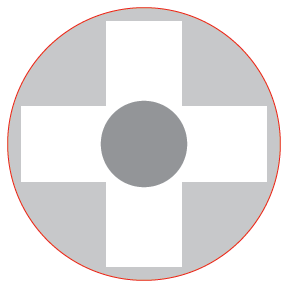 In this image, assuming that the white is the material, and the red outline is a ‘cut’, would I be able to set the greys as ‘scores’ achieve a uniform engrave depth, but quicker than an actual engrave? (with the lighter grey being a power/speed of X, and the dark grey being a speed/power of 2X)

Or would I have to do something like this: 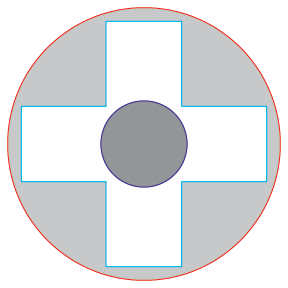 Next question, other than trial and error and using some sort of depth gauge, is there a way to figure out specific engrave depths? (assuming I was using PG material) I was looking at a plan for something, and the amongst all the cut lines was an engrave instruction to engrave 2mm.

Now for question 3:
For all you Illustrator users out there, can you recommend some plugins/scripts that you really recommend. I’m thinking of things like Finger Joints and all that fun stuff. I’m familiar with Illustrator and would love to stick with that program as much as possible (until I have time to learn F360).

Next question, other than trial and error and using some sort of depth gauge, is there a way to figure out specific engrave depths? (assuming I was using PG material) I was looking at a plan for something, and the amongst all the cut lines was an engrave instruction to engrave 2mm.

If I understand correctly what the people who know more about wood than I do have said, you’d still need some trial and error. Being a natural product, there are variances in each piece, and on top of that is manufacturing tolerance, so you may find that what gives you 2mm depth one day does more or less the next. I can’t speak from personal experience here.

I had decent luck with a really tight spiral on circular areas, which might work for you in this case.

I went deep into it here, there are caveats, and you’ll want to know them:
https://community.glowforge.com/t/super-manual-engraving/15965/?source_topic_id=16086

Inkscape’s spiral tool is nice, and you can actually set an LPI if you are handy with math. Be sure to set divergence to 1, so that the spiral doesn’t go “nautilus” on you. Also, set a very very thin stroke or it’ll look like a blob.

I think you’ve gotten your answers to 1 and 2. And while I don’t have a direct answer to 3, I can tell you I’ve used http://www.makercase.com/ and had great results.

Q3: Two very handy plugins, one that will hit your pocketbook hard (but is equally valuable) and one set that’s very reasonably priced.

$$$ Xtream Path plugin (CValley). Worth every single penny. I actually bought it twice when I moved up to a more recent AI version that the old one couldn’t work on. It’s that good.

$ If you’re going to use F360, you definitely want to get the Concatenation plugin from RJ-Graffix. _ Great little plugin for disjointed segment joining. (Which you can get from some F360 DXF exports.)

@jbmanning5 put me onto those, and although I have CS5 for Illustrator, the developer actually wrote a specialized version of the Cutting plugin to work with it. (Very nice fellow.)

Thanks for the feedback everyone. Another quick question, or should I say, I’m looking for a confirmation. I set up a solid vector shape (ie. all fill, no stroke) as a ‘score’ in the GFUI, but it only scored the outside. Is that normal, and will score essentially only do strokes, or stroke something, and it can’t be used to do a shaped area?

Score is like a cut but not as deep. It’s a line, not a fill. If you want to etch the whole area then you should set it to engrave.

Unless of course you’re a very clever forum member who has been experimenting with space-filling curves, but that’s some advance level stuff.

Another quick question. Is there a way to pause a job, and have it restarted? Say like if I accidentally forgot to order my cut to the end, and left it first. I’m noticing the material is rising a bit in the corner, and would love to throw a magnet on there to keep it flat for the rest of the job…

Not now. I recall someone asking for that to be added to the hopper though.

Dan has confirmed that it is in the hopper.