I have been noticing some issues that people have when uploading their designs for others to use, it would be nice if we could have a “Community Catalog” of sorts. Make an ability where once we have a design in the GFUI have a button that allows us to basically upload it to the “Community Catalog” along with the settings that are set and maybe even a “Create Post With Design” Button. and as it is developed we could have moderators of sorts that have the ability to “Verify” the design marking that it prints as intended and some cool stuff like that. I’m sure it is on the list of things to do (and I myself think that software alignment should be developed a bit more as priority one) but would be a nice thing to see.

Personally, I think that’s a brilliant suggestion.
It would greatly reduce the search time for that idea that you can’t quite remember what the thread title was, nor how long ago you saw it, never mind who the genius was that created it in the first place !

they dont even have to add in a purchase system right away (My broke ass would appreciate that) just make a foundation for what it will be but it would be nice if it is separate from the existing catalog for people with the community so that it is up for discussion and just all around easier for everyone here and their upload issue. as well as if it is in the GFUI already you dont really have to worry about corruption or browser issues if it is not in a zip.

I kind of hoped that’s what the catalogue would morph into. And specifically why I asked previously when they were thinking about taking submissions for the catalogue. I feel like we should eventually be able to open it from the catalogue and adjust from there.

I’ve started saving the photos on Pinterest, when there’s something posted that I want to be able to find again later. Scrolling through Pinterest photos is 'way faster than trying to figure out the proper Discourse search terms .

So obvious I never considered it. I generally just “consume” on Pinterest.

Thanks for this idea.

is that what this ‘forum’ software is called? discourse? it’s shite… horrible UI, looks like it was designed by a color blind kindergardener… so much low contrast, no color, and wasted whitespace…

I’ve gotten used to youtube’s dark mode, and I would love to see a dark forum.

That would be the “We are all going to die” videos from Yellowstone blowing up, or Space Invaders, or another “meater” striking from space. I understand from those videos that the folks from a planet around the star Vega are invading and taking over and are so confident of their success that they have begun to open their own ethnic Vegan Restaurants.

I would love to see a dark forum.

That is a Discourse option. The Crossfire forum I’m a member of uses the dark version. It helps me keep them separate

Try the Dark Reader app for Chrome. Fully adjustable, you can set it to specific sites, and it toggles on and off. 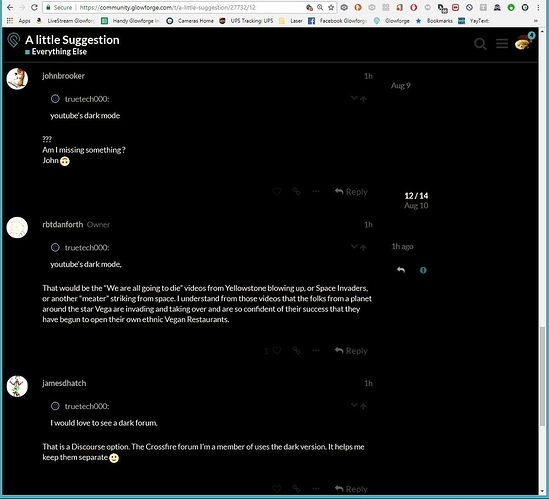 Aging eyes need more contrast. White on black is definitely more viewable as you get past a certain age. (Or so they tell me. I can read this just fine, thankyouverymuch!)

I like white on black at night - easier on the eyes at any age. That app lets you set a specific daytime and nighttime setting to your liking.

Another favorite which adjusts the lighting on the screen automatically based on your time zone is the f.lux app. It gradually “ambers” the computer screen to incandescent as opposed to florescent lighting as the sun sets, then reverses it in the morning. Heck of a lot easier on the eyes.

I will have to try that.

idk if dark mode on yt is a feature for YouTube premium but it is a setting when you click your little user icon in the top right corner of the page.

on a completely separate side note I feel like a moron because I slept in and missed fedex pickup by 10 MINUTES!!!