A scope holder for medical equipment

I needed a holder for a scope to hang on a wall in my procedure room. I made the design on TinkerCad, then exported it as a SVG and printed it first on 3mm plywood and then on the one sheet of proofgrade medium acrylic that came with the GF. This is my first post, and I know that the design isn’t usable by anyone else likely, so I will post this on made on a glowforge instead of glowforge designs. I joined the pieces together with clear E6000. So far hanging strong! 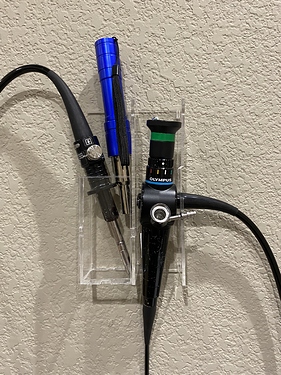 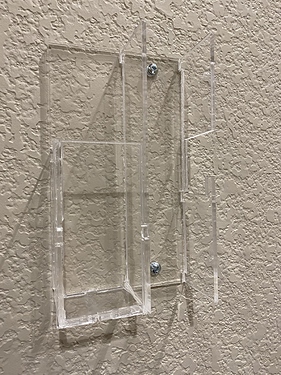 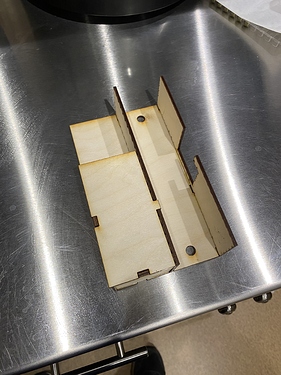 Welcome to the forum! We love practical cuts around here, even if they are mostly practical for someone else.

Would the edge be strong enough to support the scope long term? I just don’t want your scope to drop.

Maybe a hook and slot like on my ribbon rack might hold up, though I have no design experience…

You might be amazed, both folks that have a tool with the plug in power from many specifics, to being in the same medical specialty, Most could design their own to the specifics of their meed, and the specifics of where it can be placed, which has become my greater issue.

Whether or not it’s usable by anyone else it’s still pretty cool. I have made several things using acrylic sheets and use Weld-On 4 to bond edges together. If your E6000 doesn’t hold up you might want to give it a try. It is specifically for “welding” acrylic together. 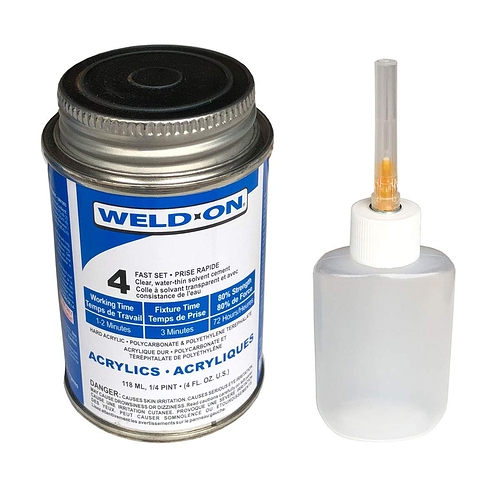 This is great information! Thanks for this. If the E6000 fails Ill step up to this.

Family Practice, I use the scope rarely but trained with one in residency 25 years ago so it unusually stuck as a tool I use occasionally. The rack idea is also a good idea. I have two tabs on the free floating wall attaching it with the glue, but if it looks like it starts to sag or breaks I’ll hit the design again. I am trusting the glue a lot. Thanks for the feedback!

use Weld-On 4 to bond edges

I have cursed this stuff! It evaporates so quickly I keep it in the freezer to lower the vapor pressure, otherwise, it would be at a near boil at room temperatures, and evaporate away, I may have bent the applicator, so I have a heck of a time filling it, and unless at freezing temps it too will empty itself while you watch. I keep both in a tightly sealed glass jar with a metal lid or they would even evaporate in the freezer. If they have been in for a while there is a pool of the stuff that recondensed in the jar.

Aside from that if applied just right it works great but a spill beyond perfect leaves an ugly scar. E6000 has issues too but both dissolve the acrylic and the E6000 will also bond acrylic to wood.

I know the pain you speak of, yes, it has it’s issues like every other adhesive

I haven’t tried keeping it in the freezer. Nice tip

I’ve had a tin of WeldOn 4 sitting on the side panel of my GF for three years. (I use the lid for assembly.)

I only have a small hole in the provided seal. I did not remove the whole thing.

I did the same with the small hole

i removed the entire inside lid, but still have the can i bought 2+ years ago. you have to be really conscientious about how you close the lid and making sure it’s properly sealed. still have 3/4 of a can left.

…the kind of doctor 90% of folks need 90% of the time. I don’t know why they don’t get more respect. These doctors are worth their weight in Palladium.

Structurally I’d only be afraid of the piece on the very right side. Looks like it’s only held along one edge and I can see it being pulled down and away from the backing piece from the weight of the instrument it’s holding. You’ll probably be fine though.

Can +1 to Weld-On for bonding acrylic together. It does take some practice to apply cleanly.

Another odd factlet: White Gold was originally made by mixing gold and then cheap Palladium that made a much softer white and was not as brittle as current White Gold made with nickel that also reacts badly with many folk’s skin.

I always understood it was platinum that was used. Platinum was considered to be a ‘waste’ material that was often found with silver (plata) in the South American mines. Then it was discovered that it had a similar (enough) specific gravity with gold, and could be melted into it. The Spaniards “debased” their gold coinage so they could more easily pay their debts to Russia.

I hated those nickel-white-gold rings. They often had casting defects hidden within the metal; the rings also grew more brittle with age. Repairing one was a nightmare. Nowadays palladium-white-gold is used. It’s a slightly greyer white, but it doesn’t look dirty the way a nickel-based gold gets w/out polish.

I was gobsmacked by the number of people who think gold is naturally white.

Platinum was considered to be a ‘waste’ material that was often found with silver (plata) in the South American mines. Then it was discovered that it had a similar (enough) specific gravity with gold, and could be melted into it. The Spaniards “debased” their gold coinage so they could more easily pay their debts to Russia.

The story I had understood was that at one point Colombian “dollars” were counterfeited in cheap platinum instead of silver that are of course now highly sought after. It would seem illogical as platinum is much heavier and melts at a very much higher temp so more expensive to make, but if one hangs with coin collectors it is bound to come up.

My mother’s wedding rings were redone in solid platinum but assembled and went well with some large diamonds she inherited from the previous generation, and she hated nickel-gold and her skin broke out from it,

Obviously now palladium gold would be way more expensive than any other mix, and looking at prices it has been nickel gold even for the last fifty years. As I think pure platinum would be cheaper and ultimately better and stronger. But I have been out of that game for a lot of years now. so not up on the latest in that thin air especially.

The practical cuts are a favorite. Basically it encourages the fact that there are few limits to what we can build.