Too late I realized that this print was going to take three and a quarter hours. Result is quite good though. Next time I’ll try faster with more power. 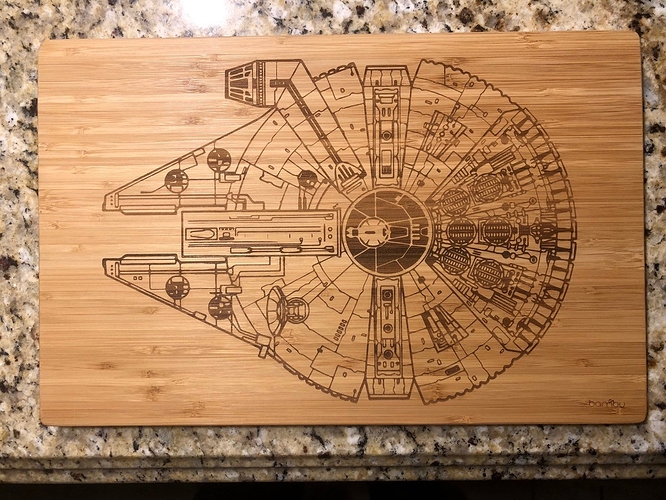 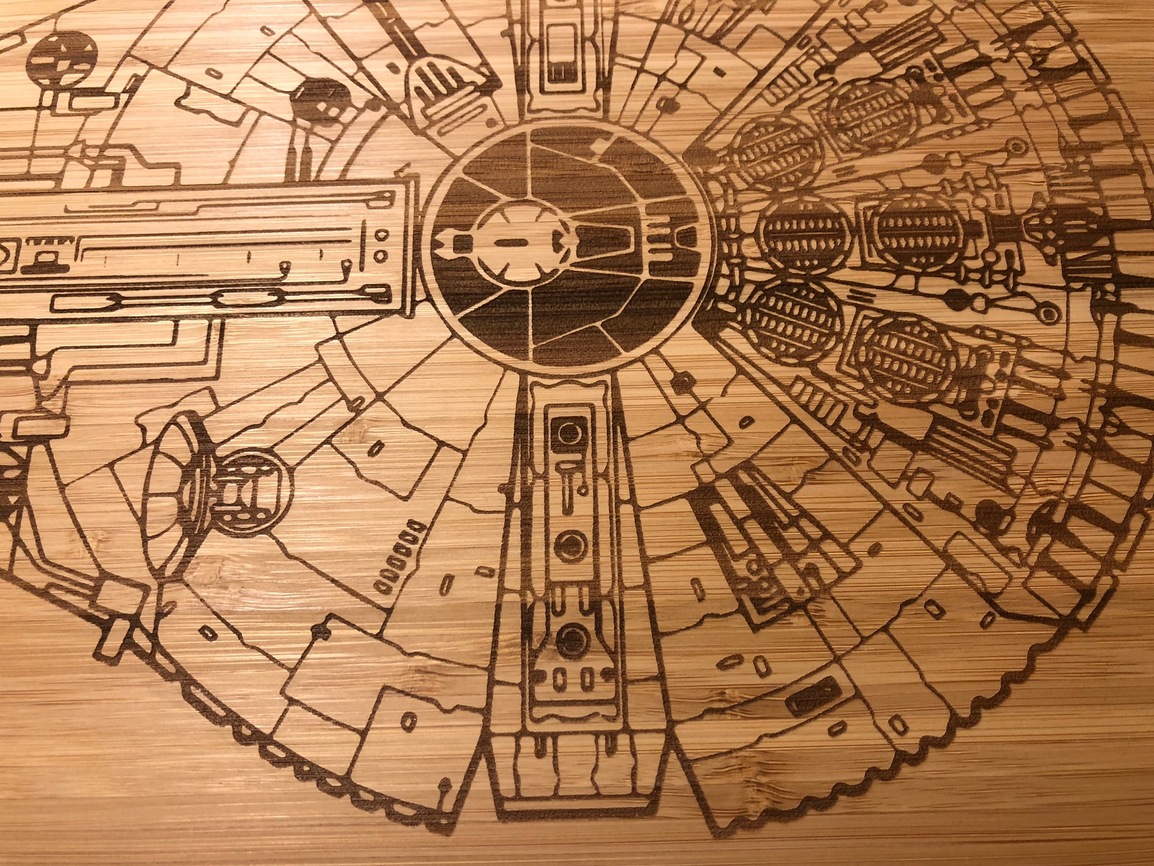 It probably wouldn’t look as nice because you’d lose some of the line weight variation, but I wonder if you could tweak the file so that some of those thinner lines score (rather than etching the entire thing). I think it might save quite a bit of time.

Hmm, given how engraving works, probably not. You’d still have the same overall area to engrave.

My guess is that you got hosed by LPI. Faster speed and lower LPI are the 2 biggest ways to speed this up. Most woods look pretty good all the way down to 270 lpi, but it might be tricky to get the correct contrast… faster and lower LPI = lighter engraves. Looks like bamboo, maybe someone posted bamboo settings?

Looks like a few people have. Jules has a post about it, but her speed is still pretty low. I’d probably go faster and heavier and see what I get on a small test. Anyway, 3+ hours or not, yours looks great!

Hmm, given how engraving works, probably not.

How so? Scoring is like cutting. It’s much faster, in my experience, and seems to take a fraction of the time. It’s the same overall area, but the way it does it is much quicker.

Am I missing something really obvious? I very often am.

Yes, I searched the forum first. There were two groups of settings in two different posts. I used the one from @marmak3261. Evidently fine for a few cheese names, but next I’m trying the settings from @Tom_A 1000/100/340.

Well, so engraving goes back an forth over the area of whatever you’re engraving If you change every line inside the falcon to score and only engraved the outline, you’d still need to engrave the entire outline, which means back and forth over the whole area of the falcon, the laser just won’t be firing as much.

If you switched to score for everything, sure, it’d be faster drawing those scores, but you’d lose the bulk of your line weight distinction (granted you could get frisky with adding more paths or changing focus by line weight (converting to colors before you go to do so)), but that’s a lot of work, and may or may not be worth it. My gut says you’re going to be in for more than 3 hours of fiddling and testing that way, so unless you’re making a bunch of falcons next week, it’s probably not worth the fiddling time – if it’s even workable.

You’ll still have hot spots at the beginning and end of every score (see my post https://community.glowforge.com/t/super-manual-engraving/15965 for more on that), so I am not sure this idea will get comparable results no matter what you do, currently.

Looks great! All I could think of when I read the title was a pirate song. ha ha

All I could think of when I read the title was a pirate song. ha ha

I was thinking of Gilligan’s Island when I typed it. A print that I didn’t realize was going to seem like a lifetime waiting for it (and listening to it.) Need to get some noise cancelling headphones…

Sadly, my noise canceling phones didn’t cut the sound much. I was surprised, they are really good on a plane (older Sonys).

I might need to upgrade, but for now I use earplugs.

(When I upgrade, I’ll ask the wirecutter… https://thewirecutter.com/reviews/best-noise-cancelling-headphones/)

Yup. I wear the ubiquitous red mickey mouse ears when use the GF (I have hearing damage from the Navy and work hard to maintain what’s left).

The time reduction from going to a lower LPI setting is indeed very close to what you’d expect, maybe within about 5% from what I have noticed.

LOL, perfect description. Though I think it depends on whether the vacuum is a Hoover or a Miele. I think in this case, it’s quieter than a Hoover. They make up for their lack of features, with noise.

I almost said “except meiles, they are fancy and quiet”.

If you switched to score for everything, sure, it’d be faster drawing those scores, but you’d lose the bulk of your line weight distinction

As you said, probably not worth the hassle. Especially if you’re only ever making one for personal use.

I can actually almost picture it with those descriptive words. Thanks!