A Treatise on Alignment

Thanks for the thoughtful write up on the state of laser cutter alignment.
I, as well as many others, have groused about the lack of the promised pass
through features. Nevertheless, I have been able to make things that would have been
impossible with other tools and do not regret the purchase. I would like to have snapmarks enabled on my machine as that would increase my productivity and allow more things to be made. I guess many of us are waiting for snapmarks.

That is definitely part of the issue. As so many rave about Snapmarks, those of us without can’t help but feel a bit disgruntled. I support GF as a company, I understand the beta process, and so on, but none of that changes the fact that right now, my laser doesn’t have the best alignment in the industry. There are workarounds and it’s not making me lose sleep at night, but I’m also not quite ready to pop the champagne cork yet, either.

I really appreciate the bigger picture look from someone who has used multiple laser types. Since it’s unlikely I’ll ever purchase one of those more expensive lasers… I have no perspective other than measuring the GF off their own benchmarks. The few times alignment has really been an issue for me, it’s needed a good cleaning.

Thank you for that perspective, and taking the time to share it. I have an abiding respect for your technical assessment.

I was poking around another laser website this morning, let’s call it hepalog, and started looking into trouble shooting head alignment issues. They have problems as well but some of the fixes involve loosening setting screws and moving pieces around. I’ll stick with the GF and snapmarks, thanks.

As somewhat of a follow up, its very apparent that glowforge has lit a fire under the other laser manufacturers collective butts.

Epilog will be shipping new models of many of their lasers which will all come standard with wide angle lid cameras. They are working hard to modify their software to re-rasterize images in order to allow for engraving alignment. It is said this will be out in its initial form mid-year. New lasers supporting this feature set might be testable and out in the open as soon as late march/april - probably premiered at the vegas laser show.

Trotec is working on a number of new camera modules as well that have more advanced capabilities and potentially software that will support camera based alignment of raster engraving/image manipulation. There is a good chance they will be premiered at the vegas show along with their new Speedy 400 lasers.

Both companies are being pretty hush-hush, but it sounds like there will be interesting things on the way.

Personally, I don’t trust the camera alignment. After a cut, the new image it snaps is often offset with respect to the original cut. It sounds like GF is working on improvements to this in their software, but in the meantime, I’ve put in my own alignment rulers: 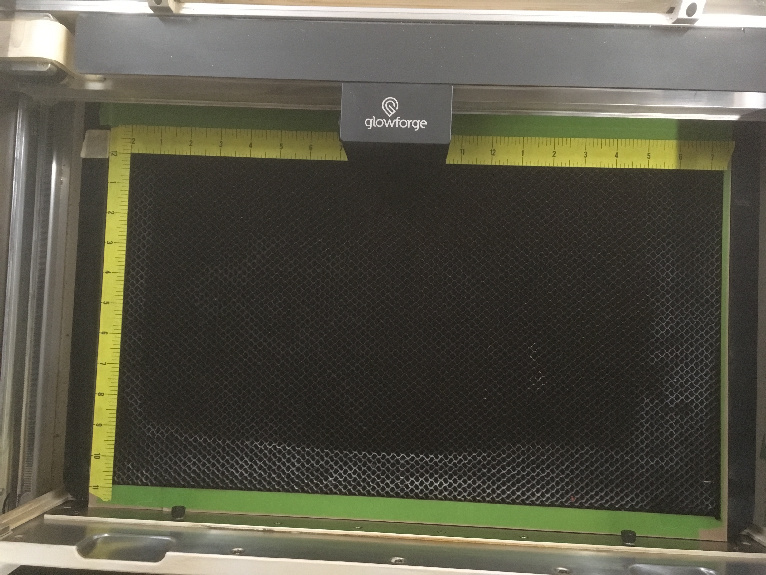 I created a rectangle as large as I could (19.48" x 10.98") - I created an easy to use max size template in Google Drawings that I use with my students. I then cut the max rectangle out of chipboard. The origin (0,0) appears to be the same and repeatable (enough) from cut to cut.

Anyway - just wanted to share my strategy for the alignment on my GF.

It’s great that they’re so ahead. But they’re not ahead on a lot of our machines. It’d be nice if they rolled out Snapmarks to everyone. I know they don’t have the support staff to handle a beta feature for everyone, but they could set up a system that only tracks feedback on beta features from specific users—maybe a panel in the GFUI for testers only? For everyone else that tries to comment on it through support, they get a canned reply about how the feature is beta and it’s currently as-is/YMMV for most users.

The crazy part is that at this point, we still don’t even know if they’re going to keep it—unless I missed something. I haven’t been around the forums much lately. I think that’s why people might be more than a little disgruntled. We’re like kids on a playground who aren’t being allowed to play but have to watch everyone else have fun.

Are you having your alignment change after you run a job? Because I have only needed to align my design once any then I can repeat that job all day as long as i don’t move the my snapmarks corner jig or power cycle the unit.

No, not at all. I actually have no problems reusing old jigs after however many power cycles, if I align the jig using my crumbtray rules.

Great write-up. I recently had Snapmarks enabled on my machine, and it’s a game-changer. I’ve done lots of one-off stuff with my GF, but hesitated on trying to do volume production work due to the alignment issues. When I first got my machine, the camera alignment was very close, but over time it’s drifted to be about 1/4" off. Since I generally use a limited number of materials and sizes, I’ve created Snapmark templates in Illustrator and cut some draftboard templates for them. My designs now laser with extreme accuracy and are now precisely reproduced on non-rectangular material. Sure, the timing could be cut down and it would help, but since my laser times run to 30-45 minutes each run, a 2-minute setup while Snapmarks does its thing is acceptable for me.
Still very happy with my GF purchase, and very grateful that the company continues to make improvements in the background. It was worth the long wait.

In the meantime I use Rhino/RhinoCAM for my CNC and wish I could just send G-code to my GlowForge.

I did decide to buy the Glowforge rather than the other laser tables due to the hype of pass through. Unfortunately, I’m not one of the Beta testers, so I haven’t got the snapmarks feature yet. I’m really waiting for it, as I could have used it last week to complete an order rather than having to provide the parts in two pieces with finger joints.

It is heartwarming to know that the beta testing appears to be going well. I can’t wait to get this feature and get my plots locked in and use the machine as I originally intended to use it.

There are a lot of times that I’m coming up against the table size of the glowforge and wishing I had a bigger table. The pass through feature will help me get that big table I’ve been looking for.

It is also good to know that there will be more options coming on the machine.

One of the features I would REALLY like to see is a “repeat” feature that wouldn’t require a download every time to repeat a pattern that has already been run before. This could be implemented easily by pressing the big white button twice quickly in succession, or keeping it pressed for a second or two continuously and the possibly having a confirmation double click or another continuous hold to re-start. That would save a lot of time and dancing from Glowforge to computer.

I have some friends who have Epilog’s and others. They all have their quirks.

Thanks again for the great article. Looking down through this string of posts make me that much more certain the Glowforge was worth the wait.

I don’t have a pro, but there are some good posts by pro owners on here showing how to get perfect passthrough alignment without snapmarks.

Great write-up. I recently had Snapmarks enabled on my machine, and it’s a game-changer. I’ve done lots of one-off stuff with my GF, but hesitated on trying to do volume production work due to the alignment issues. When I first got my machine, the camera alignment was very close, but over time it’s drifted to be about 1/4" off. Since I generally use a limited number of materials and sizes, I’ve created Snapmark templates in Illustrator and cut some draftboard templates for them. My designs now laser with extreme accuracy and are now precisely reproduced on non-rectangular material. Sure, the timing could be cut down and it would help, but since my laser times run to 30-45 minutes each run, a 2-minute setup while Snapmarks does its thing is acceptable for me.
Still very happy with my GF purchase, and very grateful that the company continues to make improvements in the background. It was worth the long wait.

Thank you for the info. I’ll give that a try if I can figure it out.

The frustrating part is the lack of updates. If we had a counter showing the percent of units with snapmarks, or any communication since November it would make us feel a lot better.

I’ve had a few projects on hold waiting for them because they will dramatically reduce the overall laser time.

You might want to consider figuring on just going ahead on your hold projects. I wouldn’t even hold my breathe waiting for Snapmarks, as they may come or never come. No one can predict that.

It’s more that I need to engrave a few thousand things on a paper template. I do them in batches but every setup requires me to engrave a series of spots for magnets before I even cut the template. I’d much rather make a more robust snapmark template.

you might want to check out this tutorial I wrote that deals with something similar: