A way to run the exhaust fan for longer?4

I was cutting acrylic and that smells awful! I was wondering if there was a way to have the fan run for longer after the cut so the acrylic can smell bad in a ventilated box for a while before I take it out?

At this time, the fan runs a default routine that can’t be changed locally. This is a feature that is often requested and has been noted by Glowforge as a feature request to go in the “hopper”.

Curious as to what do you mean by ventilated box. I assume that refers to the closed bed of the Glowforge. A little more exhaust time might be in orders, especially for big jobs that send a lot of smoke and for particularly nasty ones like rubber or leather. I’m actually ok with the acrylic smell, but then again, that’s just the way my sniffer and brain is wired. Still wouldn’t mind a little more time for exhaust to flow on occasions.

No, not currently. The ability to control the fan has been requested by many people. If your vent setup is well sealed, you should not smell the acrylic much, if at all, when cutting. When taking cut acrylic out of the GF, if you place it in a solution of soapy water, it will help remove the residual odor from the cut pieces.

It’s in the hopper, to be sure. Many of us want manual fan controls, or at least something allowing for additional venting.

In the meantime, to run the fan longer, run another ‘cut’ or ‘engrave’ at no power. The fan goes while the laser is ‘working’. A power setting of ‘1’ won’t even mark masking.

That an ingenious idea about ‘watermarking’ a vector (i.e. the glowforge logo) at the end of the job list in the UI at 1% power at medium speed (so it would run longer) after the cut. That would indeed run the fans longer after the primary cut/job has completed.

But what strikes me is the number of folks needing this feature. Even back in the PRU days, I had virtually no scent issues. The only thing that breaks that rule is leather. This is one thing that Glowforge cannot test is exhaust setups. As there are 100s (1000s) of ways to do it. The only difference in my case is routing everything into the wall with smooth pipe and a booster at the midway point and exhausting directly outside (above the window line.) After the job is done and open the lid you get virtually no smell or smoke.

I wonder if something like this would be helpful for those extra situations or folks with very sensitive sniffers.

The issue with those style of boosters is the chassis/frame made by taking a flat sheet of the material and creating a cylinder and using a folded seam to keep it together. Also usually where the wire for the mains come out it’s just a punched hole with no grommets.

For booster, I’d recommend the centrifugal type. For example-

In a pinch, the other style would work. And they do make a type in that style with a solid plastic body. But personally, I prefer the centrifugal type with a metal body. But if you are hypersensitive to odors the latter would be better. The other note (which has been talked about many times before) You don’t have to get a crazy 400+ CFM unit.

The Glowforge exhaust abilities have been designed for a specific displacement. Exceeding it causes more harm than good. The ‘butter zone’ I’ve found was placing the booster upstream 12~14’ (halfway point between the Glowforge and the exit) and no more than 200CFM.

Great tip! I’ll try that next

I could use another 30 seconds of fan. I’m cutting PG acrylic with PG defaults and it stinks at the end of the job. Smoke is still drifting up after the fan shuts off and I don’t think that smoke will be going outside without some help. My venting is a 6" straight shot right out a window with sealed gaskets all the way around. I might be getting some back flow when the pressure of the fan is stopped, but running it a bit longer would certainly help. Does anyone use an inline duct fan in their venting system, and are there any dangers in doing that?

Do a search using the terms ‘inline duct fan’. You’ll find a lot of good information.

Does anyone use an inline duct fan in their venting system, and are there any dangers in doing that?

Yes, it’s done often. If you do, it’s best to put the booster as close as possible to the end of the duct run. And seal the fan housing like there’s no tomorrow.

edit: probably not a good idiom, since who would care if it leaks if there’s no tomorrow?

edit: probably not a good idiom, since who would care if it leaks if there’s no tomorrow?

I think the idea is that you don’t have to worry about conserving resources. So while one might usually say “Gee, I won’t use too much aluminum tape sealing this glowforge exhaust run because I have another five machines to install next week”…

I’ve heard of this type of thing used with lasers: 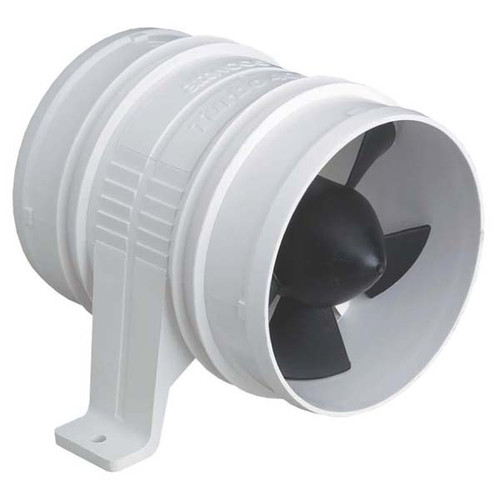 You can find them all over, just do a search for “bilge fan”.

Those are cool. Looks like they are meant to be run off a 12 volt battery but the water tight housing is a neat feature.

You could probably run it from a 12 volt wall adapter and put it on some kind of switch to run it when required.

https://www.amazon.com/Pyramid-3-Amp-12-Volt-Supply-PS3KX/dp/B0002JTD2K
Something like this would be an easy hookup and has the switch included. Since my distance is like 6" seems that the 4" version of the bilge fan would be about the right CFM. Might try one.