Hey everyone, So Unfortunately my machine never had snap marks, but it did have the Speed update to 1400 on the basic. That since seems to be gone.

Is there any way to get access either of these? If I can not, why not?

I’m increasingly finding that snap marks would be an incredibly useful feature. especially when prototyping things and adjusting them afterwards on more expensive materials

Snapmarks were only for certain machines that could use them, and were never released to everyone. Similar to the beta for the passthrough, except they are unsupported.

Have you done the camera calibration? It seems you have missed quite a bit of news here in the forum as the beta engrave speed has been gone for months - higher speeds remains for raster engraves, however. The camera calibration has greaatly improved visual alignment.

I have been out of the loop for a while. I had to focus on work and a few other things and the Glowforge got neglected. Since the quarantine, I’ve been back at finding a lot of cool new things to make, but I’m making stuff measurement scales, so the alignment would have to be dead on.

But I haven’t done the calibration. Is that something I can just search for?

Does anyone know if there will be speed updates that will be reintroduced? That was a huge deal. It’s unfortunate that it didn’t stick around.

Were they just not very good? They seemed like a really good thing to improve on and bring as a permanent feature. Especially more making jigs for engraving multiples of items not created entirely in a glowforge.

They work very well. It was part of the effort to develop the passthrough software.

Dan has said they might be made available in the future.

Great. That would be really useful for multistep builds.

I would imagine that that grid location on the glowforge app would be accurate every time. and if I drop a piece in that bottom left corner that it if I want an engraving 1 inch up and 1 inch to the right, all I would have to do is type that grid location and it would be perfect.

Thanks for all of your input, I have been a bit more of a casual user, but now I will be moving in 1 week to a more remote location, so the glowforge is going to become a very important primary source of income.

Yes. That is exactly what I did until the camera calibration made it unnecessary.

I simply cut the largest rectangle I could out of a full sheet of material, which seats onto the bed in the same place every time. I then moved it around so I could engrave rulers along each side. It still hangs alongside my machine, but I haven’t used it in a year.

I wasn’t the first to think of it. Many people had “bed rulers” - but I never saw anyone else make a full frame like I had. 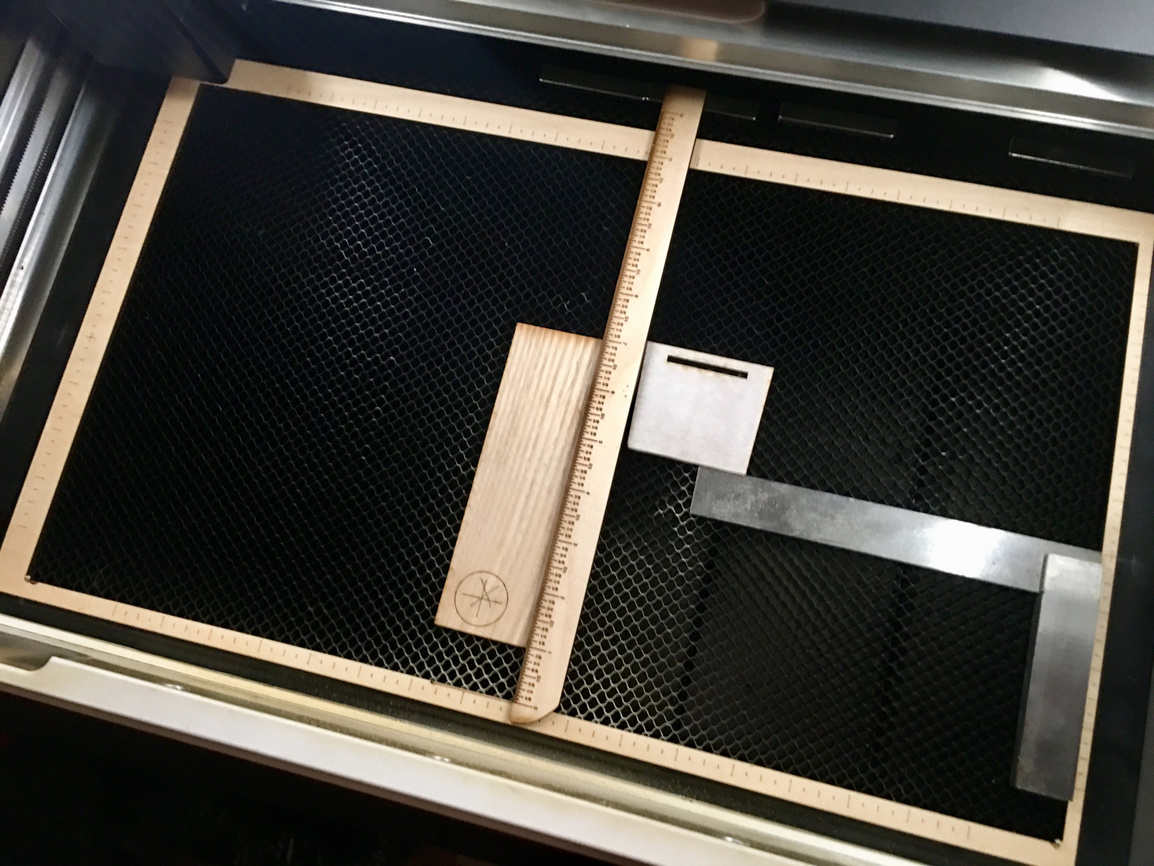 I’m sorry for the confusion about engraving speed when you logged back into the app. It looks like you’ve already received some excellent information and advice from our other community members. Thanks folks!

Regarding the change to the higher speeds, with the update announced here, vector engraves are now limited to a speed of 1000 in order to prevent issues that were identified during beta testing. As @dklgood mentioned, the higher speeds are still available for bitmap engraves. In order to double-check that your unit is working as expected, will you please let us know if you’re able to access the higher speeds when trying to engrave a non-vector image?

Great! I think I’ll have to square my machine first. I tried the method recommended by perfect squares and it actually made it worse. From about a 32nd in 10 inches to a 16th So I might try to shift it the other way and do some test cuts. But what you’ve done looks perfect. especially for precision jobs. It wouldn’t often be necessary for what I do most of the time, but there are sometimes where its so important. I’d say its mostly valuable for fixing mistakes.

Thanks for following up. Please let us know when you have a chance to check that out.

It looks like it does offer PNG files at 1400 that is good to know. Thanks!

Thank you so much for updating us, I’m glad to hear that PNG files can be increased to 1400.

In regards to your unusual Squares-not-Square trouble, we have a great set of instructions for properly squaring your laser arm here