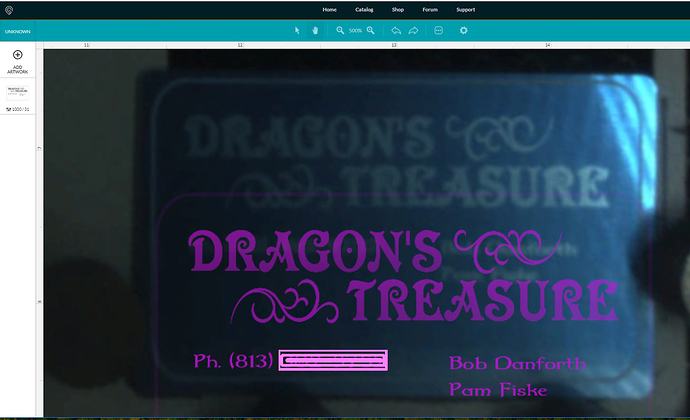 It appears that you did not set your “Material Thickness” which is under what you see in this screenshot “Unknown” this is THE MOST critical step in any carve process. If GF does now know the exact material thickness down to the 100th of an inch (A good set of Calipers is extremely helpful). I believe if you measure your material and enter it then retry you will be astonished at the results.

Also, it appears you have removed your crumb tray for this carve, (again material thickness is essential) and if the tray has been removed you need to add that to your depth of material. Search the forums there are MANY articles pertaining to crumb tray depth etc. that will help out greatly.

Have no idea whether what @alexmcclure suspects about your setup is your problem or not. Either way, clearly “enough said” isn’t enough.

Actually not at all, unless you are doing proofgrade it will always say that. The good thing is that I got out of the computer and went to the tablet and it kept the same location, so I can just change cards and hit print again and it is at the moment repeating just where it did before, so even though it looks off once I found where it was printing it is keeping printing there

That is not far from the center, and where it is printing is quite different from where it says it is printing. It always is a lot of work to discover just where it is printing, but I now have several magnets making certain the uncut cards are places exactly where the last card was placed. As noted all the usual checks were made, and that shows it about an inch or more off.

You should click that ‘unknown’ and enter the material thickness there.

This conversation seems a little disjointed.

It appears that you did not set your “Material Thickness”

@rbtdanforth, did you set your material thickness? What’s the actual thickness of the material? What’d you set it to?

unless you are doing proofgrade it will always say that

It will always say what?

It shouldn’t be. What do you see when you use

material with its corresponding

an inch or more off

If you see this with

material with its corresponding

setting, this would indicate a issue that requires additional troubleshooting.

So, along these lines, when the crumb tray is removed, I saw that the material needs to be between 1.5" and 2.0". Is that right? Does that mean it cannot focus down further than that 1/2"?

What I ended up doing was taking out the crumb tray and putting something under my work piece to raise it up above that 1.5" threshold.

I’m asking here because it seems it might be pertinent.

Does that mean it cannot focus down further than that 1/2"?

@rbtdanforth, did you set your material thickness? What’s the actual thickness of the material? What’d you set it to?

I set it to 0.03 but Glowforge just calls it 0.01 that is what it ha been using all day including a previous design. all are often quite far off. Glowforge says the distance can be as much as 1/8 inch and clearly it is more than that.

You should click that ‘unknown’ and enter the material thickness there

Yes I have seen the need sometime back and do so.

Cool…Thanks, @Tom_A! I just wanted to make sure I was reading that right. And I guess I’m doing that how I should if my material is thicker than 1/2"? Just put something under it to raise it into that range? I think I’ve seen some others make riser blocks for this type of thing.

It does not matter if you are using PG or not, you can and MUST still enter the thickness of the material. Click on the “Use uncertified material” button to get to the get to the thickness setting.

yup do that all the time unless proofgrade. when you make a change it changes quite a lot but when you were doing paper and are now doing paper-thin aluminium there is no change in height.

Support had said to post a picture when it happened again and this was the again. it is the same in Windows 10 and in Android which for that part is a good thing as the tablet is making copies and the computer is free for other work, but I am “making hay while the sun shines” which is to say as long as it holds its setting so all I have to do is change out blanks I will get what I can, though I had plans to do several at a time instead of just one.

Just put something under it to raise it into that range?

Yes. But, please, even if related, let’s not hijack @rbtdanforth’s thread. Anything posted in Problems and Support should contain one problem/question to be resolved/answered. It would be unkind to clutter the issue and make it harder to find the answer to the actual question.

Yes. But, please, even if related, let’s not hijack @rbtdanforth’s thread

As I just did… however as I have scoped precisely where it will actually print no matter what it says, I am sticking with that for a while to actually accomplish the work. I would like the image it says to be the image it gives but at the moment, any change, even to be more accurate, would be a problem. the issue when it first came up was exactly that, that I had the actual print isolated where it had been and suddenly it was mor accurate ruining what I had working at that time.

Okay… I’m confused… If you don’t want anything resolved/answered, why did you open this service request?