Trying to reduce the sliding friction from my attempt in plywood, I applied the same design to black acrylic with paint fill in the etches and scores. I see a few spots I missed that I will need to touch up, but the technique works very well!

I painted over everything with a thin layer of white acrylic paint, let fully dry, then scrubbed off with a soft damp cloth. It’s almost like scratching off a lottery ticket. 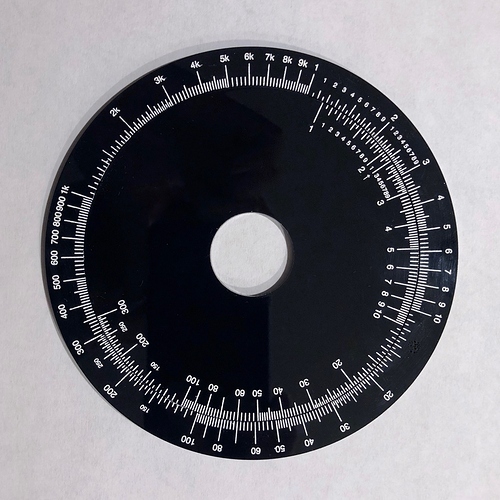 Nice! The details on that really stand out with the white on black!

Instruments… so tasty. This pushes all my fiddly little buttons that love watches and whatnot. In fact, I wonder if anyone sells a watch with an easily lased face? Maybe a plain anodized face? scribble scribble scribble idea

Oh, I like that idea about the watch face. I’m definitely going to be on the lookout for one I can re-purpose now.

You are going to blow people away when they asked you where you bought it and you tell them, “Nowhere, I made it…”

Wow! That turned out awesome!

The detail on that really is spectacular! What is the diameter?

Really nice with the white on the black. Great job!

Love the engraved paint fill! Its my secret weapon for making something look manufactured.

Looks great! How are the two discs fastened together?

It is a 3-ply sandwich construction, with a wider outer ring in the middle layer creating a tongue that slides in a groove formed similarly with the inner rings. I got the idea from this Instructable. Some modifications to try to reduce sliding friction: the middle ply doesn’t actually meet up (the groove is much deeper than the tongue sticks out), and since my design is single sided I didn’t bother gluing on the backside outer ring. If you don’t get it perfectly concentric, it introduces an opportunity for sticking. My design is registered only by the top face.

This is awesome! I actually have to make a replacement part for some vintage equipment, it was this exact kind of setup, lines in acrylic filled with paint. I had hoped I could do it with the GF when it arrives, and this verifies it. Good stuff!

Okay, well, here’s what I’ve got. The first is the one that outputs my special purpose dosage calculator, the second is a more general purpose linear Mannheim style slide rule. They are written in Ruby, using the rasem library for SVG output (gem install rasem to get it).

Even for people who aren’t interested in slide rules, there may be something of interest to be found within on how to generate SVG programmatically from ruby.