Adventures in card making (on cardstock)

I finally got my Glowforge a couple of weeks ago and have finally made some projects with it! Well mostly the finished results are my wife’s work, but it was super fun to play around with the settings and get it working.

These are mostly cut at 400 speed and power of 32-34 (I find at 500 it could easily cut paper, but the machine would buck and jump around a bit so I slowed it down some).

I was pleasantly surprised with how things turned out. We ended up taping the cardstock down to the crumb tray in the edges to keep the airflow from vibrating and moving the paper. 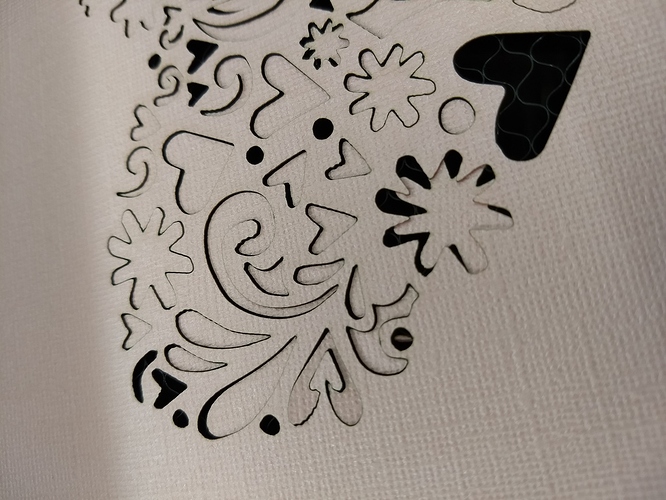 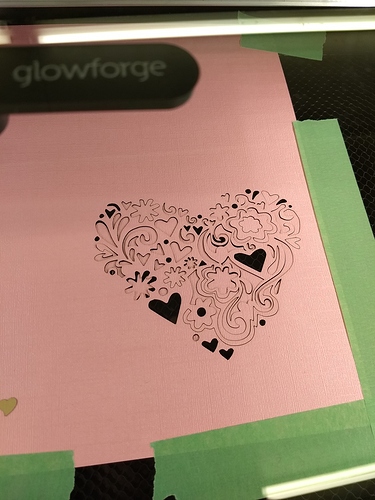 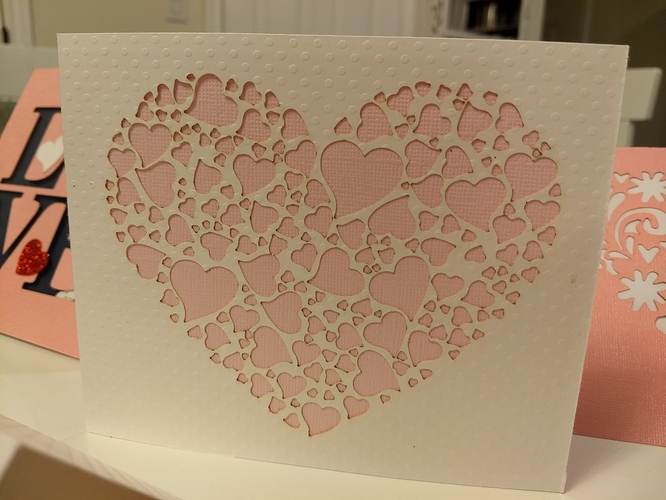 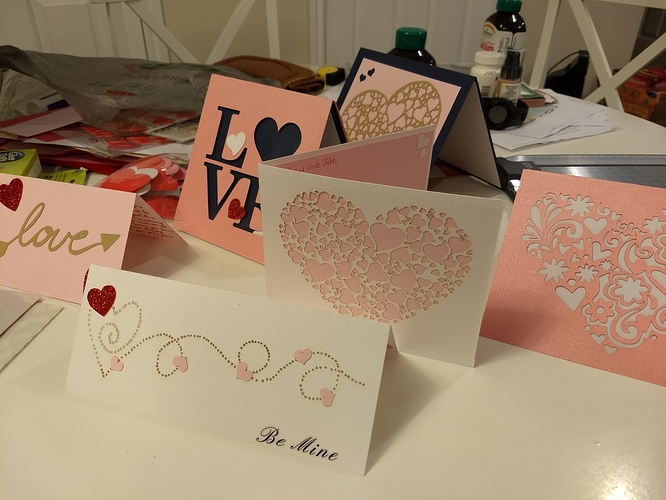 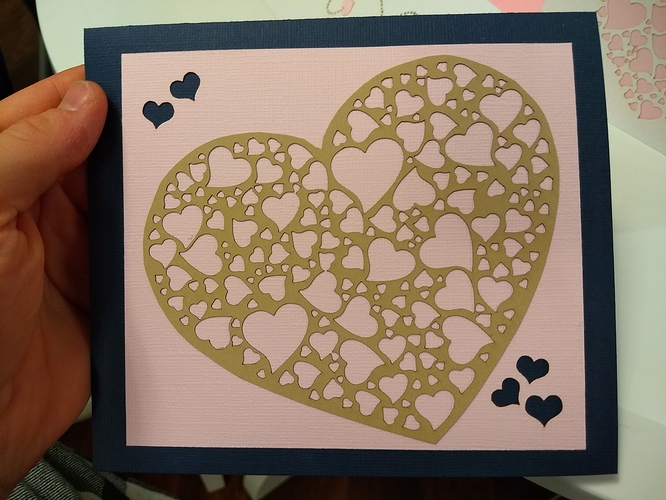 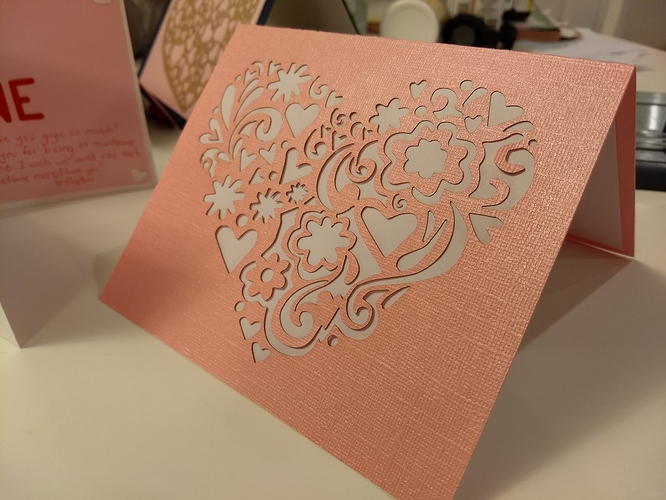 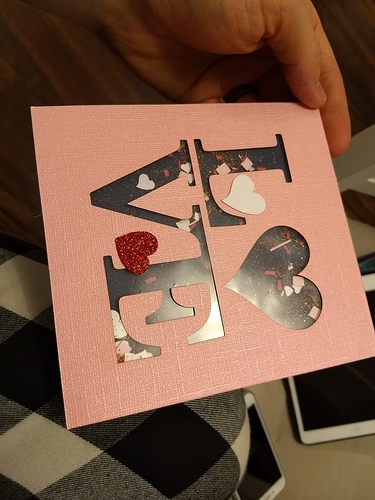 I see your ready for valentine day, great job. Thanks for the settings paper is on my to do list.

Nice. Any advice on how to reduce the flying paper? I find that intricate and numerous cuts created a snowstorm in my GF.

Best thing to use is a mat like this one
http://www.bfplasticsinc.com/tapes-fasteners/seklema-table-mat.asp

Ditto on the Seklema mat. I love mine.

Best thing to use is a mat like this one

Can I cut the mat down to fit better into the GF? For instance there is a 12x24 size, that would be a little too wide.

Also, what happens to the mat where the laser penetrates the paper?

What weight paper is “card Stock?” I’m hoping to make some pop-up cards one of these days. After the, “honey I need a gift” list is done.

Wow! Those are really nice!

I don’t know about cutting one down smaller. I just bought a smaller size…but part of that was due to the expense. They’re sort of like the self-healing cutting mats as far as when the laser beam hits it. You can see marks, but it doesn’t cut through. You’re supposed to be able to use the mat for a long time…and even then, it can be flipped over to use the other side.

Nice. Any advice on how to reduce the flying paper? I find that intricate and numerous cuts created a snowstorm in my GF.

I was a bit worried as well, but I found that when I started using the cardstock instead of white paper from my printer the pieces didn’t fly around as much. While cutting out all those tiny hearts, I had several little pieces fly around, but only one of them landed on a place where the laser then tried to cut out another heart. Because I had taped the paper to the crumb-tray, the paper didn’t move at all, and I was able to delete everything from the design except the one little piece that wasn’t cut (because it was blocked by a trash piece), and just rerun the program. It cut in exactly the same spot and you couldn’t even tell… So honestly before you spend money on a fancy mat (which sounds like a great thing for sure…) maybe just try cutting a few things and see how much of a problem it actually is.

Another option might be to find some really low-tach masking tape and put it over the paper first. I cut a few places near the edges of my piece where the tape was, and it cut through the green painters tape just fine and didn’t hurt the paper I was using when I pulled the tape off…

Thanks! Good to know! I had read some things about the GF leaving slight burned-out spots in sharp corners on paper since the laser currently doesn’t adjust the power as it slows down to turn, and I was worried it wouldn’t work well for paper. So I was eying a new Cricut Maker (still tempted, it looks super cool), but after messing around with the GF I think it works great for what I want to do, and I’m sure the software will continue to get better

What weight paper is “card Stock?” I’m hoping to make some pop-up cards one of these days. After the, “honey I need a gift” list is done.

Honestly I don’t really know, my wife just went to the local dollar store and walmart and came back with a bunch of different papers. I’m guessing most of these were around 60-100 lb paper, but it’s been ages since I worked a lot with different paper weights, so I could be way off.

It’s really not that hard to just mess around with the settings and figure out what works tho. If you don’t want to waste paper, just draw a few straight lines and import them and cut near the edge of a piece of paper. Start around that 400-500 speed and 15-35 power, and see if it cuts. If not, up the power a bit and try again. I found once I got to my 400/34 it pretty much cut through all the various papers/cardstocks I had without changing it for each one. Maybe a few of them burned a bit more and I could have turned the power down, but we were happy with the results.

Paper mats: I’m sure the Seklema mats are great, but I’ve had success using just a piece of plywood and Krylon Easy-Tack adhesive spray.

Corner burning: corner burns happen because the head has to decelerate and accelerate to make the turn and the laser power isn’t adjusted accordingly. I found that I could reduce or eliminate corner charring by slowing down the speed and lowering the power accordingly. The acceleration changes are smaller.

Paper Easter lilies Made on a Glowforge

I’ve combined a bunch of suggestions/ideas, and this is my current favorite process for cutting paper/cardstock. Low and slow: speed 200, at whatever power it takes to cut. For regular paper, that’s something around 2. For the cardstock I have, 15-20. Medium tack front masking. I ended up with this one and not the transfer paper @jules recommended. I wasn’t going to buy any at all, except I needed a kicker to get me over the prime | FREE One-Day limit on a different item. Works pretty well…

I just ordered a Seklema mat from UScutter.com
No idea how long I’ll need to wait to get it. Shipping was $10, but I found a coupon code for 10% off. “WELCOME17”

speed 200, at whatever power it takes to cut.

That is an excellent idea, I’ll have to try it out. Thanks for the tip!

I can sense the love! Your cards are wonderful.

Just another card to share, this one I made for my wife. Was hoping to make a fancy pop up card (a la’ LovePop cards style-check them out if you haven’t seen them, they are amazing.)

Anyways, I ended up kinda copying their front cover from one card and finding a design for the inside. The red sections are cut out with red felt glued between the layers. Also played around with engraving card stock a bit and I like how it turned it. Kindla a light caramel gold colored engrave.

I tried slowing the speed down to 200 and lowering the power, but didn’t notice much reduction in the corner rounding burns. They aren’t bad in any case. 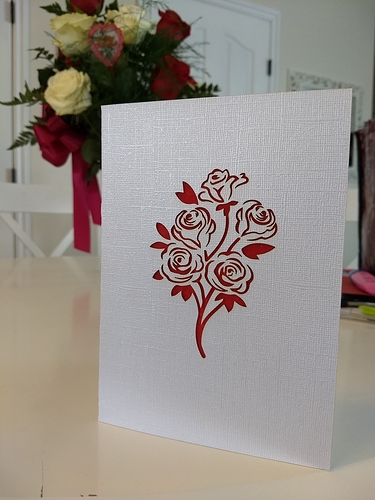 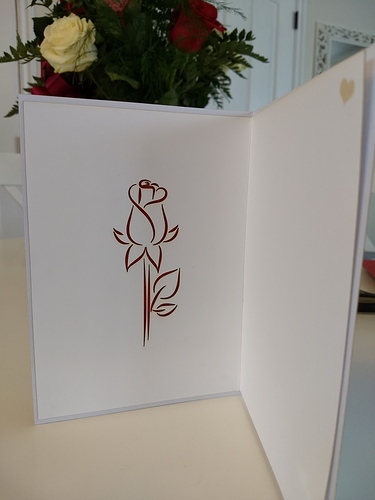 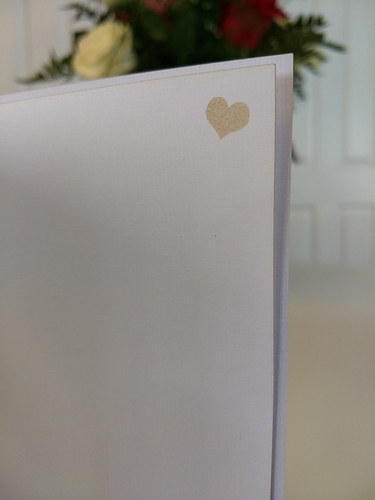 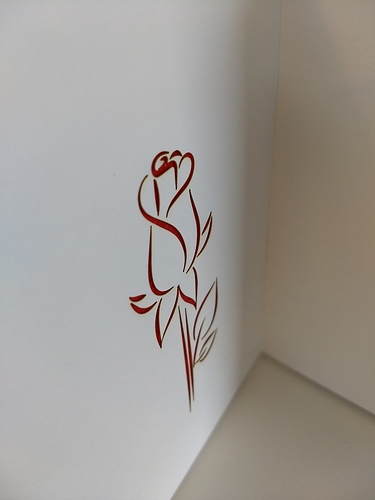 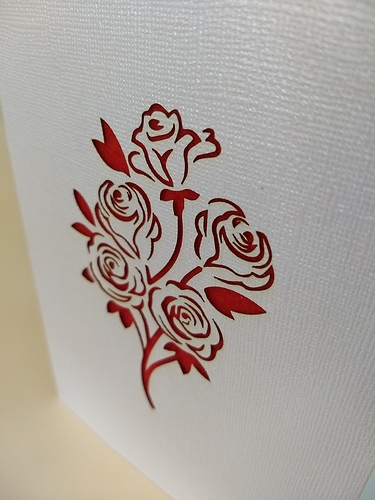 WoW - They really do look professional (or better) like @Jules said! What do you use to hold down the cardstock (protect movement from air assist)?