Air Filter not turning on

We have had our Glowforge Compact Filter (CF-100) for a year and recently have been having trouble turning it on. The red switch only sometimes beeps when pressed to on, and sometimes doesn’t turn the filter on even if it beeps. I tried switching the fuse and it possibly helped, but problem is still occurring +/-50% of the time. The switch will be in the on position, and the red light will fade and turn off. Once the filter is on and running, I have yet to see it turn itself off. Is it possible theres a faulty connection behind the power faceplate? Is that faceplate removable? We would love any suggestions for how to fix this issue! Thanks. 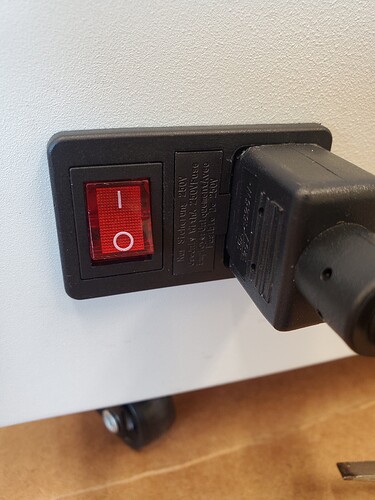 Definitely a good idea to wait and see what Glowforge says before you consider doing anything.

It is an intriguing problem, nonetheless, and I can’t help but be curious. I’m somewhat familiar with those power sockets because I’ve used them in projects. They’re cheap and plentiful (such as these for example) but come in subtly different shapes and sizes and some are made poorly and start fires, which dampens one’s enthusiasm for DIY replacement.

But what is interesting, from my point of view, is that it’s just a switch and a light. The light could be faulty, but that shouldn’t affect the operation of the machine. You said sometimes it beeps but the fan doesn’t run, which is weird because it’s obviously getting power in order to beep. If the switch is loose or intermittent, that would be something to worry about, because bad connections at line voltage can heat up quickly. Another possibility is that there’s something wrong with the filter’s power supply, and it’s shorting out in some way that causes the light to dim. That would also be a bad show.

I’m not saying I took my filter apart so you don’t have to, but I wouldn’t be at all surprised if it were glued in from the inside, which probably makes sense given how much attention seems to have gone into avoiding air leaking through any cracks.

I’m so sorry to hear about the trouble you’ve been experiencing with your Glowforge Air Filter. I appreciate you taking the time to work through some additional troubleshooting steps, and reaching out to us via the Community Forum. Based on the details you’ve provided, we’ll reach out directly via email to provide the next best steps. I’ll now close this thread.