My glowforge has had the message “alert cooling” for about 60 minutes now. It is 72 degrees in my house. It is 50 degrees outside the window where it is venting. I turned it off for about 10 minutes and tried it again and it came up with the same message. Any ideas?

Maybe it’s a little warmer where the Glowforge is? Is it possible for you to confirm? I believe 75º F is the limit for the basic model.

I’m in CO, so I definitely think it is colder if anything since it is next to a window and it’s 50 outside. I’ll leave it shut down for a while and see what happens.

It’s almost like it is stuck in a cycle. It turns on and says “alert cooling”, then that goes away after a few seconds and it says, “needs calibration” and says I should turn it off and back on. I do that and it just goes through the same cycle.

So it never calibrates? When you turn it on, after several seconds, do you hear the faint clicking sound repeated a few times? Do you notice any changes at all? Sound, lighting, movement?

It never calibrates but I believe it is because it thinks that it still needs to cool down. I think you are right about the placement though. Good call. I found an ambient temp strip and I think the direct sunlight getting through the blinds is what is the issue. The temp strip reads 77 even though the room is at 72. Unfortunately, I have to have it by the window for venting, but having by the window is causing it to be too warm. So, I’ll have to figure something out.

So, I’ll have to figure something out.

Definitely possible it’s a little warmer than it would prefer.
I’ll tell ya, a nice heat source (like direct sun) can make quite the difference.

Maybe close off that room and open a window for a minute and see if that helps. Might take more than a minute to cool down whatever sensor is making the determination.

Can you close the blinds?

while this doesn’t help the cooling/calibration cycle issue, I can relate to the issue of “house temperature” doesn’t exactly match “GF temperature”. I ended up putting a small thermometer next to the GF. Turns out the GF’s area is colder than the A/C set temperature and warmer than the heater temp.
As a bonus, it also shows the humidity, but I have not figured a way to adjust that. I’m in south Mississippi, so it’s always around 99%. 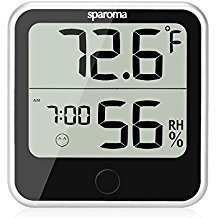 I did and I had to turn on the central air. The room has a vent right underneath. That cooled it down pretty fast and it was up and running again. If I am overheating in the winter… I’m a little scared of what the summer might be like. I might have to relocate to the basement.

I considered the basement, myself. My situation may be a little unique in that my Glowforge sits in a tiny little isolated room. There’s no radiator in there so it gets downright cold in there over the winter. I got my 'forge in the summer and when I got my first heat warning I went out and bought a small window A/C unit. No temp issues since.

I’m concerned about temps also. It averages 82 degrees year round in St. Croix and I don’t use AC as cost of electricity is 0.52 cents per kilowatt hr.

In fact I just got back power after 100 days since Irma and Maria blazed the island.

You definitely need to be. Especially if you have a Basic model. >75º you will very likely not be able to run the unit. You should probably start planning a solution. Pro can tolerate higher ambient temps due to its active cooling.

I am getting a Pro but I guess I’ll have to bite the bullet on AC. I just did a quick thermal (infrared thermo) scan of the office. 89 ceiling, 85 desk, 81 floor.

So I guess I’ll be wearing a hoodie to forge. (We use a down comforter on the bed when it gets chilly “72”)

I am getting a Pro but I guess I’ll have to bite the bullet on AC.

Hoping somebody will chime in on Pro max ambient temp. But you might want to hold off and see how it does before you spend unnecessary $.

Too add to that, we don’t build insulated houses, its just too temperate and they don’t spend the money.

We just build to keep the rain out and the roof on ( my east-north corner is 6" higher than the east south, thanks to Maria and I have to redo the roof. But it did stay on while most of my neighbors lost their roofs)

Wow… i find that bizarre.
One of the first things i do when i buy a new place is immediately go through and find where i can improve insulation.
The cost of insulating is far far cheaper than the cost of heating/cooling and pays for itself in no time.

For comparison sake in the area i live is considered temperate (Central Coast, New South Wales, Australia)
Summer Max: 38C (100F) (but this is on the up and we had a 46C (114F) day this year - thanks climate change)
Summer Average: 27C (81F)

I know coming from the US (Maryland) close to 20 years ago I was appalled. But I understand now. We have about 8 degrees average temperature difference year round. 91 has been the highest and 68 the lowest in my experience. Low humidity and trade winds. Even so, if I built a new house I would insulate it.

Most houses are concrete block or monolithic pours for Hurricane resistance. I bought a wood house after seeing how the concrete houses are built (one order of blocks at a time, can take 10 years to finish) I know wood. But we have all three kinds of termites so its a trade off.

Since the Hurricane I have to remodel, so some form of insulation will be included, More than likely Foam panels because of the termites.