Not sure what’s going on. I just cut this file, no problems except a few double lines. I deleted them and cut file again, and this happened. In between cuts I opened the lid, took out one piece of wood, put another in, closed the lid, cut again. I didn’t touch the head. It looks like this file started cutting right, and somehow shifted mid cut. No one was in the room but me, checking periodically. 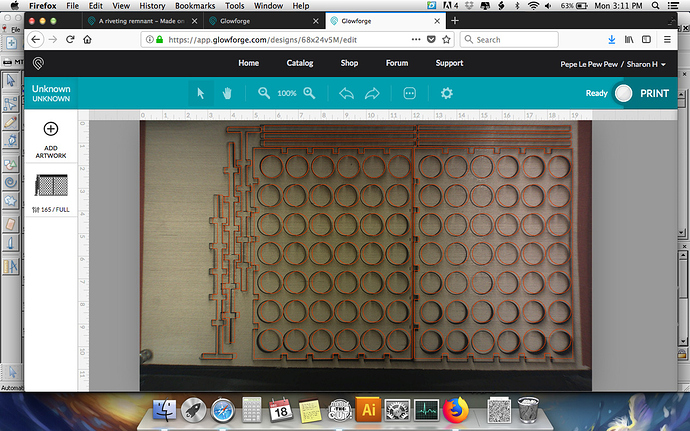 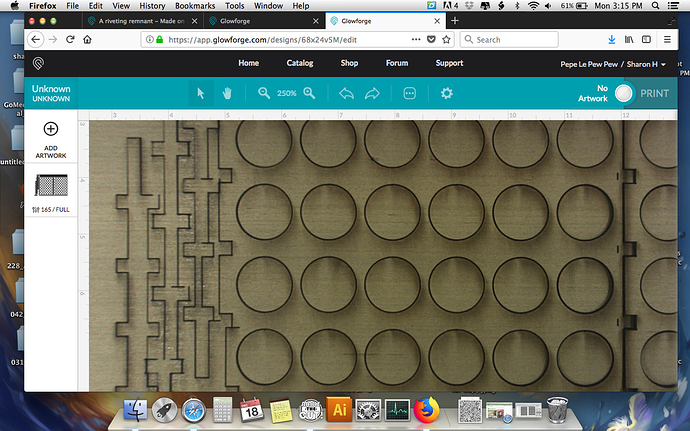 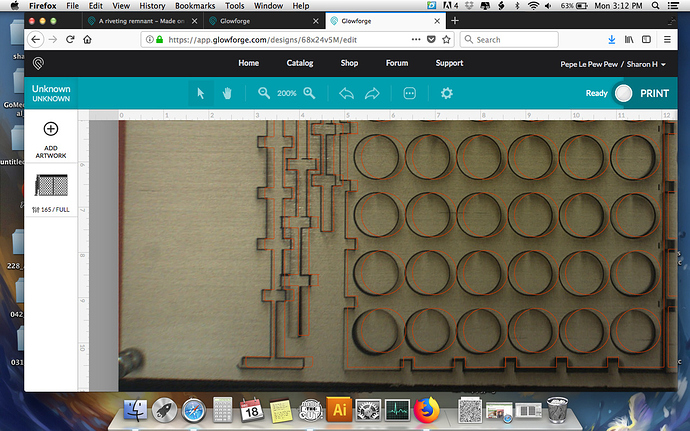 I have ran into this issue also a few times. I have had the whole project move from where it was set to print or items within the project to move. So far I have only one part get messed up from this. But material space is wasted.

Ok, so I turned everything off, pulled out the wipes that came with the machine, took out the lens with the lens tool (first time)…it looked fine but I wiped it anyways, and when I was done, saw what looks like scratches or smudges. I tried to remove them by wiping more but they wouldn’t go away. 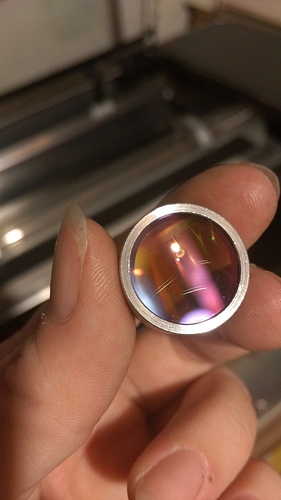 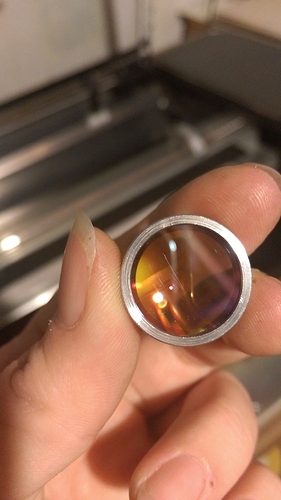 IMAG1174.jpg750×1333 210 KB
I wiped the other two places that the manual suggests, and put it all back together. I cut the better together clutch out of cardstock and everything looks fine. Not sure what’s up with the previous alignment, or if the smudges/scratches? matter.
shronimo December 19, 2017, 1:15am #4

Yep, I only have a couple of more shots available before I run out of this material. Wasted material is no fun.

I’m sorry you’re having trouble. Would you do a test to help us learn more, please?

Also, I notice in your photo that there’s something in the bed besides your material – do you think it’s possible that the Printer Head hit something?

Finally, I have a couple of questions to ask about your lens and will follow up.

Hey Rita! Thanks for the response, however, I am back in Canada for Christmas and won’t be home until after the new years, so I can’t check until I get back. I’ll post the results here as soon as I am able!

This sounds like the same problem i and others are having. Is there a fix?

Hey @Rita! I’m back and able to test print for you. First off, what you see in the other photos, is a magnet. It’s not as big as the fisheye makes it look…it’s flat, and I use them often, and have not had any problems (that I know of) yet. I checked everything and there is nothing blocking any movement and no debris stuck under the feet.
I put in a piece of draftboard, loaded up the gift of good measure in the front right corner, and printed it. The first print, I flipped it to get it as close to the corner as possible, and was hovering over it as it started, and first thing I noticed when it started to print, was that when it moved over to the corner, I heard it hit the side. I think it may have shifted a little even before it started printing, and since the shift happened before the print started, the whole thing printed correctly. 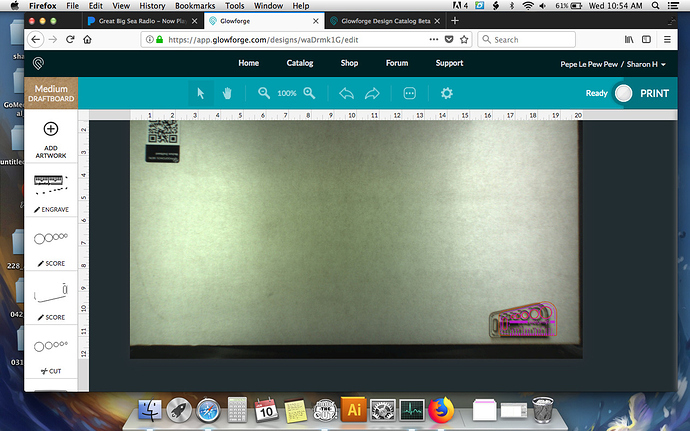 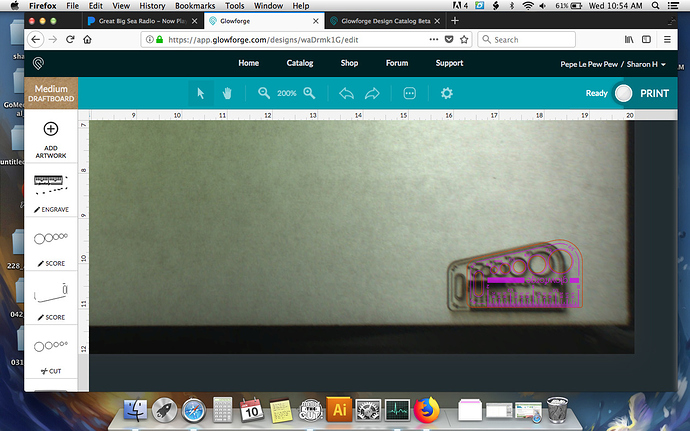 Screen Shot 2018-01-10 at 10.54.51 AM.jpg1264×790 326 KB
I took a couple of screenshots, and then instead of flipping the image around, I hit command+z to get it rotated back around. While I was undoing, my machine turned off…on it’s own. I have no idea why, but it’s the second time since I’ve had it that it’s done that. I flicked the switch on the back off and back on, and it turned back on with no problems.
I then turned my draftboard around, and proceeded to print the gift of good measure a second time.
Here is the result from the second print. 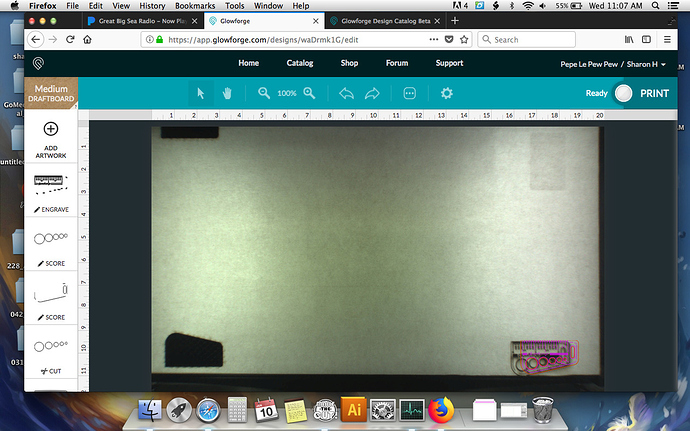 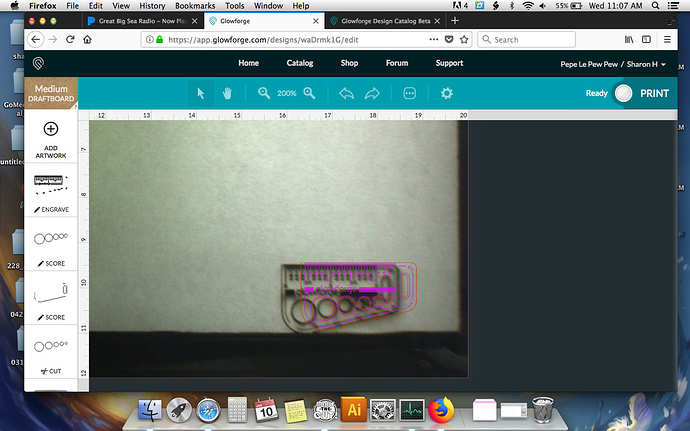 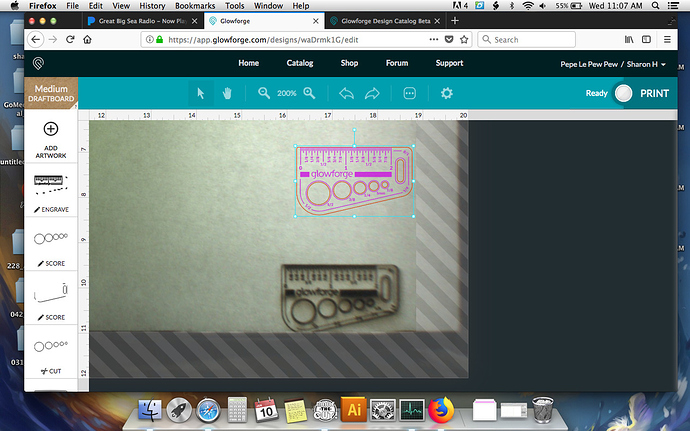 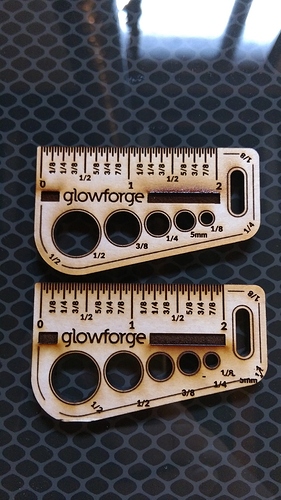 IMAG1214.jpg750×1333 328 KB
The tape is still on them, and ignore the bottom under the 1/2" circle…it cut slightly off the edge of the draftboard…but you can see that something definitely happened during that cut that set the alignment off.

And the lens questions? I’ll answer the best as I can.

I also wanted to add, that I’ve been searching around the forum and found that a lot of folks have had a bumping issue in the front right corner. I turned the machine off, moved the rail and head to the front of the machine, moved from the left to the right, and it doesn’t reach the right edge. I took a photo (the best I could get), showing how far over it will go, and it doesn’t hit the right side. I don’t know how forward it should go, but the head on my machine can touch the front door…and if the door is open, it can keep on going by about a half an inch. That may be normal for all machines, but I only have this one to look at. As for the right corner, I know I heard it bump something on the first cut, and the second cut showed that alignment went off somewhere in the cut. 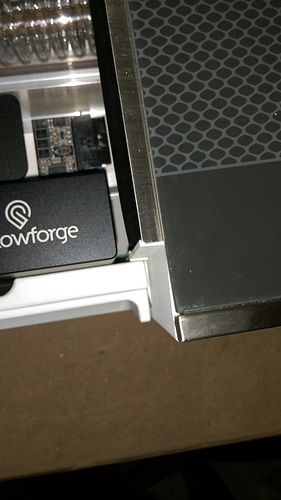 Welcome back from your trip! Thank for the very thorough update. Unfortunately we’ll need to replace your unit.

I’ve sent you an email about this and we’re working on it there, so I’m going to close this topic.