Alignment within 1 print and score is pretty off

I just did a score / cut with one job, without touching the machine, and with previously good alignment, and this is what came out… 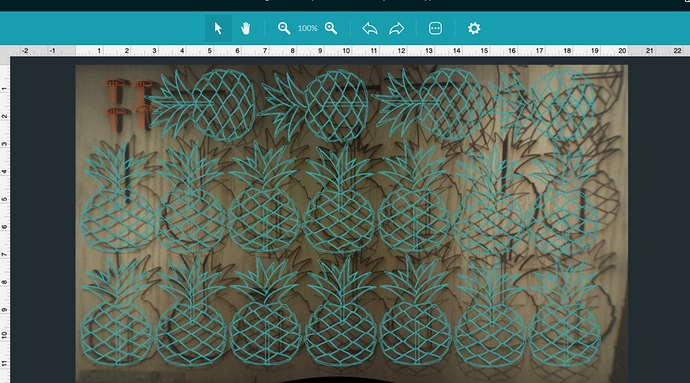 Not sure why it did this. 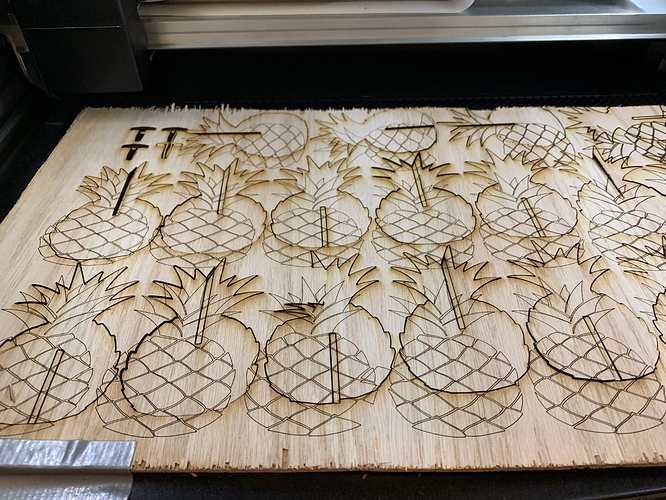 This is the file I used, I think scaling it by 10% will make the joints tighter during assembly, but I haven’t played with it yet.

Don’t have time to do another test, have to go to work… without my pineapple patch.

Looks like this is a hint of your problem, 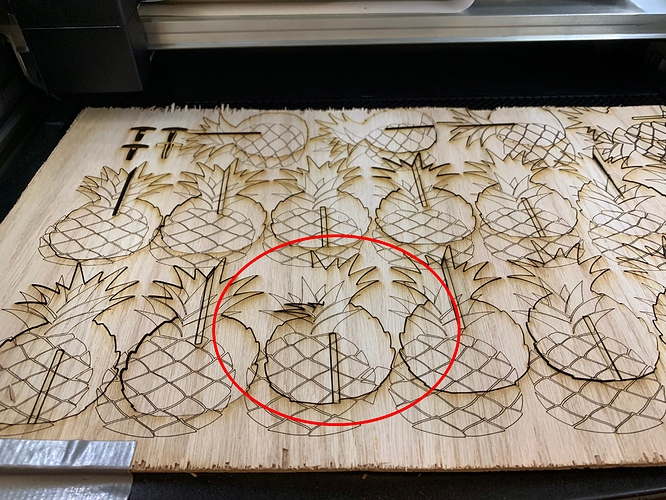 The design should work, but because the outlines of the pineapples are not one path, but grouped paths it’s going to be easier to snag a part of the image and shift a part of it.

SVGs should work as designed, but sometimes where there are lots of individual paths and many nodes, there is a greater chance of error coming in from the saving as an SVG and then importing into the Glowforge. 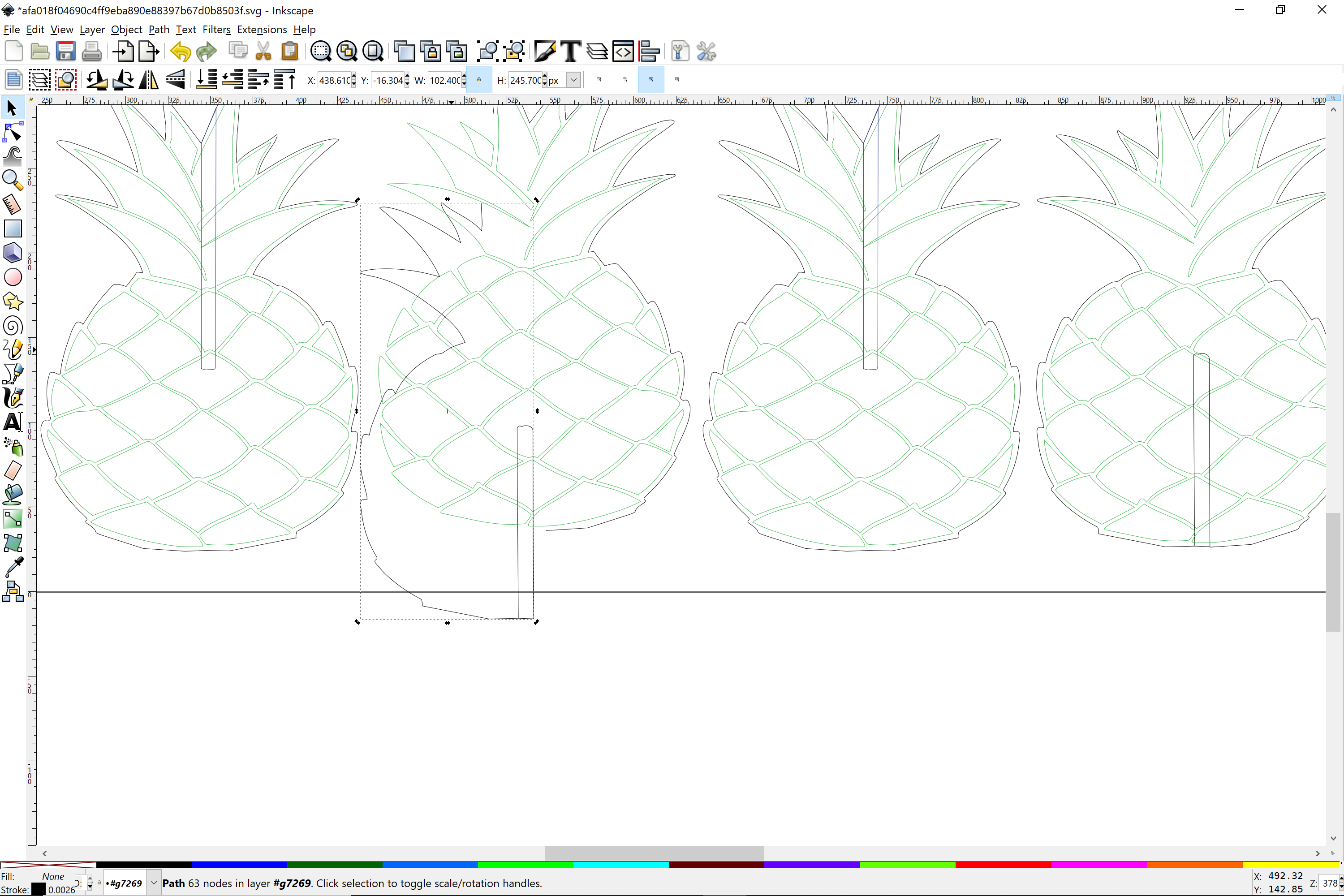 I wonder if this version might be better. Just trying it out. I joined paths and did a little cleanup.

Edit: fixed a couple nodes and tightened up the slots. Needs testing on cardboard.

10% will make the joints tighter

The way I made the slots, you can edit the nodes easily to tighten them up to whatever thickness of material. Go into node edit and shift select the nodes of one side of the slot and then alt+arrow over, or however Illustrator does small nudges. Do the two exemplars and then duplicate and align as desired.

As you can see that side of the pineapple is not moved but squished and not even scaled, as the vertical scale at the top is much less than the scale at the bottom. That tells me that something was resisting the movement and that sort of thing can really throw off where the Glowforge thinks it is, and that messes with the alignment.

So do you think it is hardware related, that something got stuck and threw it off but then it went and did the second operation? It’s weird where that lower right side of the diamonds is messed up on that same pineapple.

I just assumed something in the paths get mangled along the way.

you think it is hardware related,

I saw it happen when the blower hit a pin and skewed the whole gantry. It took me a while to figure out that such is what happened and I had to reset the whole gantry. I also saw it when the head changed direction too fast and threw everything else.

This is not what happened here as the resistance was not hard like a pin or gradual over the whole cut as was the case with the head changed direction fast, rather I think something got lose and temporarily jammed the movement somewhere and then broke loose as the problem did not continue, I would reset everything and if necessary re-calibrate the machine and expect that this will not likely happen again.

Thank you so much, I can’t wait to get home from work and try it out.

Thanks! I will give it a go. Can’t fire it up right now @ midnight in Hawaii, need to wait till the morning. 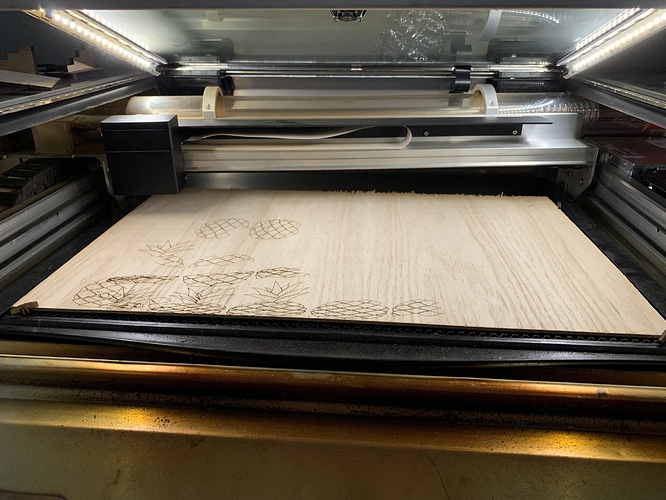 IMG_5214.jpg4032×3024 3.01 MB
So in the end, the problem seemed to be mechanical, as the one side of the entire laser seemed to not be moving smoothly with the other side as seen in the photo. I turned it off, and slid the entire mechanism all the way to the back, and to the front, and checked that the area below the crumb tray was unobstructed. It seems to be working now, but I don’t know why it decided to not move in sync again after yesterday’s misfire. Thank you again for fixing my paths marmak3261!
3 Likes
ivan1 August 22, 2019, 6:02pm #10

I’m sorry that your Glowforge is having trouble with print alignment. It looks like some of our community members have already helped you with some initial troubleshooting. Thanks folks!

I’ve reviewed the pictures you shared and also extracted your machine logs. It looks like you were up and printing yesterday. Has the issue reoccured?

I think a good next step would be to check your machine’s Y axis belts to see if they are loose. Would you please do the following?

Please let me know what you’ve found after checking everything above and I’ll advise on next steps. Thank you!

It did it twice, then it stopped misbehaving. I have done a few prints since then without problems. Thank you for the troubleshooting tips!

I’m glad to hear the great news that your back up and printing! I’ll go ahead and close this thread for now. If you run into trouble again, please post a new topic here on the forum or email us at support@glowforge.com and we’ll be happy to help.