These were another gift I made for Christmas and wanted to post after they were opened as gifts. My daughter actually works on tall ships (old ships). She volunteers on a ship in the Seattle area (Lady Washington if you would like to see it. https://en.wikipedia.org/wiki/Lady_Washington

Imagine working 60-70 feet in the air on a moving ship to work on the sales. It was really incredible to hear she was doing this.

Anyway she also publishes an online comic about pirates as well and has been working on a pirate costume. So I decided to make her some simple flintlock pistols. The picture of three shows the prototypes and the final hard wood version. I have her the second to last mdf version (ship mate’s gun) and the hard wood version (captain’s gun). Both of them are working multi-shot (not period accurate) rubber band guns and can be seen in the video.

The materials are all proof grade and it was my first attempt to create inlays for the handles. Sadly as so many of my projects often do, there were LOTS of prints that didn’t make the picture and working out how to get the triggers to work and the rubber bands to release was a bit tricky, but I am really happy with how they came out and how happy she was to get them. 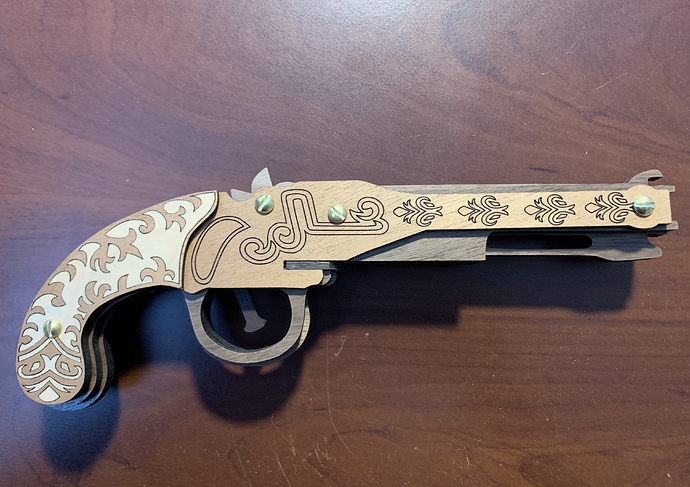 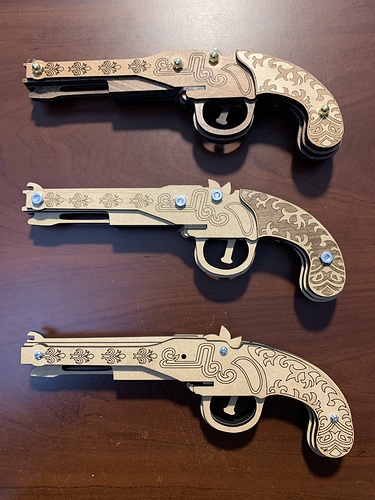 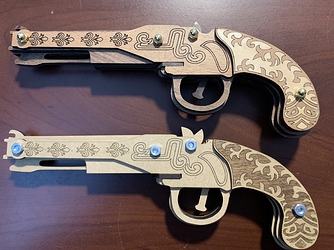 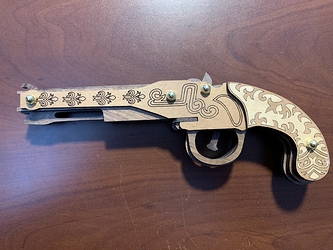 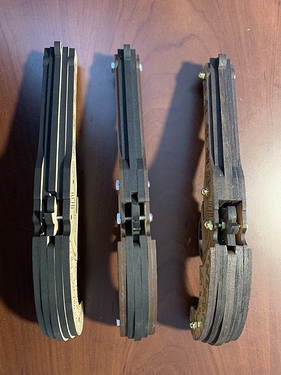 These are fantastic! Every pirate should have one.

super cool. I rarely have any unique ideas by myself. So, this is something I now want to look into how to make.

That is what I thought.

I am the same way. I spend time being inspired by others, There are lots of great projects on the forum and out on the web. These were definitely inspired by my daughter, but they are based on a design I found on the web. I did modify it a lot, but still, needed some help to get started.

She volunteers on a ship in the Seattle area (Lady Washington)

Your daughter wouldn’t happen to be Samantha would she? I have a friend who also works/worked on the Lady Washington. Talk about a small world!

and that pistol is fabulous!

My daughter is Ashley. I think she may have mentioned Samantha. It really is a small world.

There are lots of coincidences in this world, aren’t there? (My niece is named Samantha and her daughter is named Ashleigh.)

Those are amazing!! Now I want one!

Ok, but you gotta make 'em sized for these rubber bands 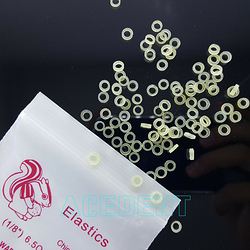 That would be much more fun than their original use

What a great project and outcome!

Thank you, getting it fully working was a challenge and with my visualization issues, I ended up make many more than I should have. But I loved giving it as a gift.