While working on my clock, I got the idea to try to make a rubber band gun using a clock escapement attached to trigger to regulate a gear to release the bands.

After a little research, I realized this is not a new idea and it should be completely possible.

(I found several different ones, but this was the closest to what I was thinking.)

Another Gift from Christmas. Flintlock rubber band guns Made on a Glowforge

These were another gift I made for Christmas and wanted to post after they were opened as gifts. My daughter actually works on tall ships (old ships). She volunteers on a ship in the Seattle area (Lady Washington if you would like to see it. https://en.wikipedia.org/wiki/Lady_Washington Imagine working 60-70 feet in the air on a moving ship to work on the sales. It was really incredible to hear she was doing this. Anyway she also publishes an online comic about pirates as well and has bee…

I started really simple, just to test the theory. After it showed promise, I wanted to make it look like 1873 Colt from the Wild West!

Here are some of my iterations along the way. 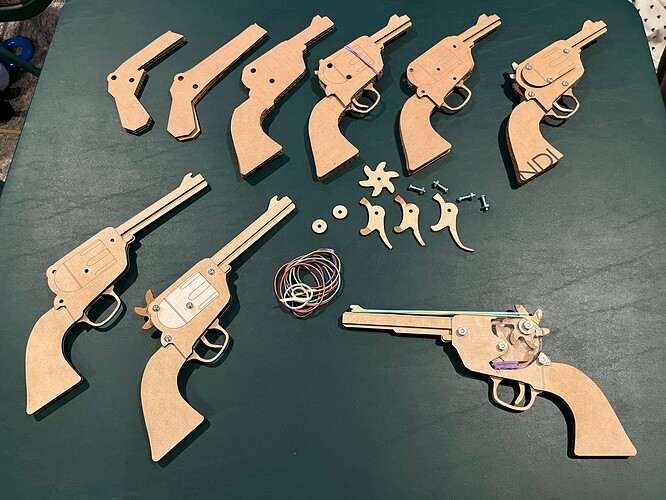 I started off with the 3" barrel for Colt model, but after I thought I had the gear figured out I increased the length to add power/force to shots. That is when the draftboard started falling apart, being smashed to bits by the force.

So I started dipping/soaking the gear and escapement in UV resin. This added strength and little longevity to the pieces, but they still wear out fast if I try to use more than four bands. (It is designed for six.)

Unless I try to cut the pieces from Delrin, I am not sure I can take it much further. I think I have taken the Draftboard to farthest point it can go in this project.

[Edit: Added video of it in action.]

farthest point it can go

Have you tried a gear out of acrylic? No idea if better, just saying.

Have you tried a gear out of acrylic?

I did, and two of the gear teeth snapped after the first shots. Now that was earlier design and the gear design is “sturdier” now, but I am hesitant to try again do to how catastrophic the last attempt with acrylic was. The draftboard slowly breaks down, but the acrylic does not appear to handle the impact very well. It doesn’t get smashed and start to fall apart, it just cracks and breaks off.

True plywood would hold up better than either acrylic or draftboard. Find some good Baltic birch for your final version!

I have plywood I can use, I just haven’t tried it yet.

Do you think it would be further strengthened by the resin?

I might cut two and try one with and one without.

You might need to double up the thickness. I maed this one and it’s held up.

I was more concerned with posting someone else’s work. He did post the the plans and a video. All I did was make it glowforge friendly.

That might do it! If I double the surface area of the impact that should greatly help.

(And thanks for the link. I missed that one in my earlier searches!)

That gear looks a lot smaller too. That would decrease the torque to impact ratio.

I originally increase the gear size for strength, but then I loved the look of it too. Not sure I would enjoy the look of the smaller gear as much… but hey, if it works.

Plywood has more “give” than acrylic, which is far more brittle.

No idea how it would work in this case but it would be worth trying.

Did you anneal the acrylic? That should eliminate cracking & shattering due to the stresses applied by the shots.

You really are the gear whisperer, aren’t you? This is really an incredible project.

I ran some simple tests just doubling up the gear and escapement, and the results are seem rather incredible. It handled six shots without any signs of issues.

I will try to cut a new version tomorrow, and I am hoping this has solved my issue. 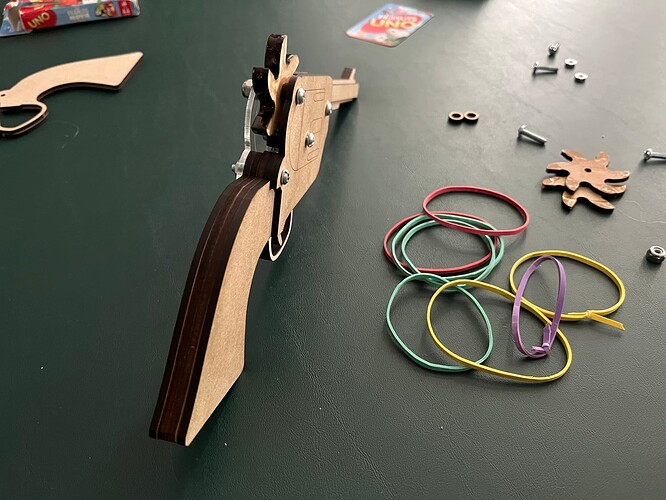 I went ahead and soaked the gear in some of the UV resin (just for added strength). And while it was drying I put the Colt together with a couple of the old draftboard gears, just for some more testing while I waited.

It shot 6 bands pretty easily. So I kept going just to see if it would start to wear down. After 7-8 reloads, I started to notice parts of the old gears flaking off again, but the escapement showed no sign of wear at all.

Once the new gear (two plywood gears glued together) dried from the resin dip, I replaced the old gears and continued testing.

I started to wonder how many bands can I fit on here? I got it up to 9 before they started binding with one another, but they still all fired. And still no wear showing on the plywood. Plywood definitely seems the way to go, and doubling the inside layer helping spread out the impact also. 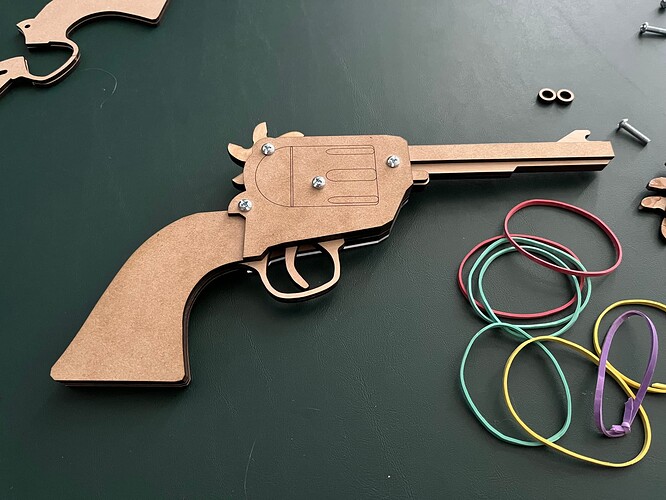 With 9 bands the frame started shifting, so I think I might add some more support to help hold the whole thing together, but other than that I think I might be calling this one completed!

Thanks so much for all the help and suggestions! This design will likely show up in the free section also.

I made a new version entirely out of plywood this time. (Except for the acrylic I added to simulate an antler handle.) 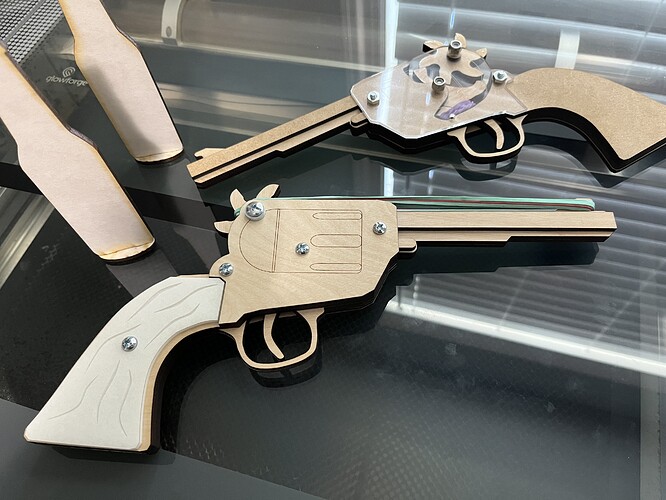 I did not use the UV resin on the gear this time. I wanted to see if it could hold up to the impact with it, and it has not been having any problems so far (even though I keep loading it with more bands than it is designed for!)

I also took a short video of it in action:

What you’d already posted was cool, but seeing it in action is awesome!