Anyone try and engrave the plastic side of these yet? Settings and success stories?

Sorry…don’t even know what Apple AirTags are.

Little quarter sized Bluetooth units that all they do is report where they are so when you lose say, your keys, you can use a phone to find them. 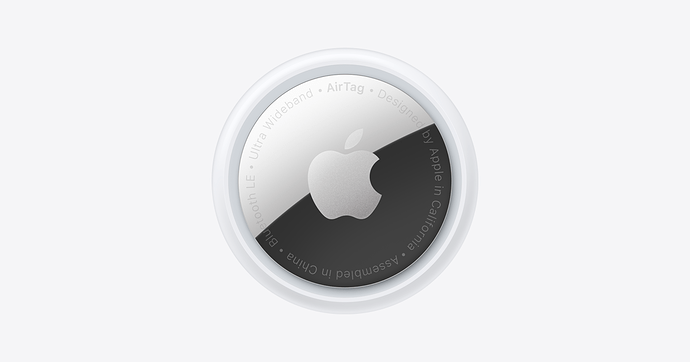 Attach AirTag to everyday items, like your keys or a backpack, to easily keep track of them in the Find My app.

They are refusing to do certain lasers things. You can’t do

. I tried it. It just gives an error. There are other censored things too. So there’s a secondary laser market for “us” if we get good settings.

They are refusing to do certain lasers things. You can’t do

. I tried it. It just gives an error.

Confused. Who is they, and what is giving an error?

Read that as Mother Apple doesn’t want dirty words lasered on its products.

I already have some on pre-order along with silicone cases. I doubt I will try to engrave the airtags initially but the silicone cases should be easy enough.

I almost next to never lose anything (knocking on wood), so it doesn’t surprise me that I didn’t know what they were. Otherwise, I’m a big Apple person.

When you order them from Apple, they’ll do free laser engraving(also on iPhones and iPads). Certain combinations of characters inexplicably just return an error.

Oh, OK. Haven’t bought anything with an Apple Logo since 1985. (Unless some remastered Beatles albums counts from Apple Records.)

Just FYI - the laser engraving that Apple does uses some kind of mystical laser that makes a permanent mark, yet doesn’t actually melt the plastic. (I think they’re actually doing some sort of sublimation to “engrave” the white polycarbonate body.) Engraving on them with a GlowForge will.

This was asked a few days ago, maybe more, and I’m sure it will continue to be asked until someone just goes for it. If I were to do it, I’d do high speed, low power, and as this isn’t in the Beyond the Manual category, we can’t say specifically what settings. In fact, I’d probably start with cardstock settings that are shared here. The plastic shouldn’t need much, and for better contrast, you could use masking, laser it, then fill the engraved section with paint or markers. It would just help with cleanup, but not necessary obviously.

My curiosity was piqued about the air tags, so I went and looked at them. But, also what you said about limitations on what icons/text you could put on them. You were right…it’s funny!

At initial glance on MaxTech’s teardown, the outter white casing holds the coils while the inner battery cradle has the magnet. Guessing the outter case serves as the speaker cone of sorts. 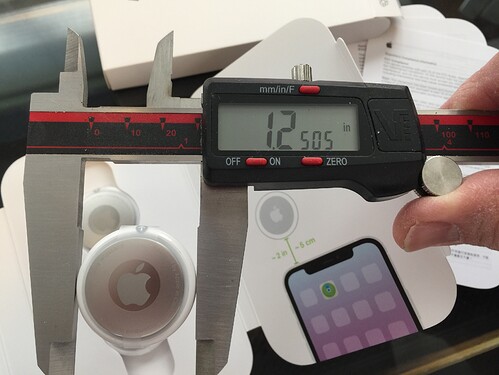 Having discovered what just the HEAT of the laser will do to the electronics underneath the surface you’re lasering on (MacBook Pro engraving -- What NOT to do), I wouldn’t even consider trying to laser something as thin as these.

Yeah. I was looking at the iFixit teardown. They were saying how instead of a cheap piezo transducer Apple actually put a driver coil in there and connected it to the face as a speaker “cone” of sorts…

I was particularly fascinated by the X-Ray/size comparison image… 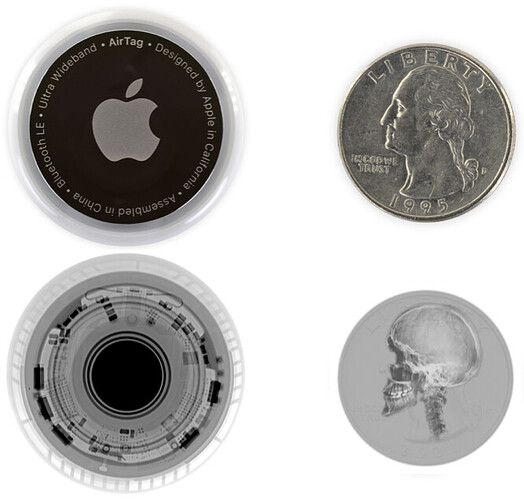 I almost next to never lose anything (knocking on wood)

Neither do I. I just put it “somewhere safe”. Then when I move, I find it.

Only if I could disassemble it to just do the part sans electronics in it.

Ha ha! I get that. I actually used to keep a list which I titled “lost and find” using some little weirdo widget on my computer. In the list, I wrote down where I put various obscure things that I knew someday I would want to find again. It worked really well until the widget became one of a few apps that were no longer going to be supported when I updated my OS…and it went away, taking with it my list. I usually check out which things will no longer work before I update, but I must have missed that one. It was lost, never to be found again.

i was the one who started that other thread… still tempted to get one and give it a shot. i agree, high speed, low-ish power.